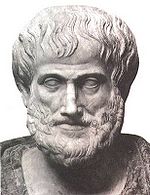 Aristotle (384BC - 322BC) was a Greek philosopher born in the city of Stageira in Chalcidice. He was a student of Plato and the tutor of Alexander the Great. Aristotle emphasized reason and observation of the natural world, and he is believed by many to be one of the most important philosophers of all time and the founder of empiricism, the ontological grounding of science. Aristotle is considered one of the earliest politics thinkers and called politics "the master science."[1]

Aristotle liked to think and teach while walking, and he lectured by walking along with his students on the covered path in the Lyceum. This was called the "peripatos", from which the word "peripatetic" (pair-uh-puh-TET-ik) derives, meaning something that is itinerant or related to walking.

Aristotle came to the Academy when he was seventeen and stayed there for twenty years until the death of Plato. Aristotle’s approach was in stark contrast to Plato's. Whereas Plato thought all true knowledge could be obtained a priori—a disembodied mind floating in a featureless void with no sense experience could work out everything there is to know—Aristotle thought that the natural world needed to be studied and observed for knowledge to be gained. He embarked on the massive task of observing and compiling as much information as possible on everything he could study at the time. In contrast to Plato’s interest in physics and mathematics, Aristotle was fascinated by biology and classified over 500 animal species. He ultimately founded his own school, the Lyceum, and equipped it with specimens, libraries, maps and other objects found in modern universities.

Charles Murray said, "(Aristotle) more or less invented logic, which was of pivotal importance in human history (and no other civilization ever came up with it independently)." [2]

Aristotle also formulated Virtue Ethics, a code of living which emphasizes what sort of person we want to be when making a decision, rather than, as tends to be the focus in modern ethical thinking, the motives or the consequences of actions (see Nicomachean Ethics). When Aristotle's teachings were brought back to Europe at the end of the Dark Ages by Arab merchants, Aquinas, eager to reconcile Catholicism with Aristotle's secular empiricism, developed Natural Law Theory.

Aristotle was not a theist and rejected the existence of the old gods many Athenians worshiped. However, he recognized the impossibility of an infinite regress of cause and effect in the natural world, and so postulated the Unmoved Mover as a first cause of the natural world. Some argue this makes Aristotle the first recorded deist, though he did not predate certain movements in Egypt and the Near East, and his Unmoved Mover can very effectively be understood as part of man's journey towards the God of Christianity.

Aristotle was mistaken about many things. He felt that heavier objects fall faster than lighter objects which, though intuitive, is false. Like many other Greek philosophers, Aristotle felt there were four basic elements of nature: fire, water, air and earth, and a fifth suggested by Aristotle, ether. Actually there are over 100 elements as set forth in the periodic table, as well as more fundamental subatomic particles comprising the elements. Some modern philosophers have pointed out that by not testing many of his more intuitive propositions (e.g. the speed at which objects fall relative to their mass) Aristotle failed to exercise his empirical doctrine. Though accurate, most scholars agree that such examples are eclipsed by his opus of biological observations and categorization.

His extant writings span a wide range of disciplines, from logic, metaphysics and philosophy of mind, through ethics, political theory, aesthetics and rhetoric, and into such primarily non-philosophical fields as empirical biology, where he excelled at detailed plant and animal observation and taxonomy. In all these areas, Aristotle's theories have provided illumination, met with resistance, sparked debate, and generally stimulated the sustained interest of an abiding readership. Because of its wide range and its remoteness in time, Aristotle's philosophy defies easy encapsulation. The long history of interpretation and appropriation of Aristotelian texts and themes—spanning over two millennia and comprising philosophers working within a variety of religious and secular traditions—has rendered even basic points of interpretation controversial.[3][4]