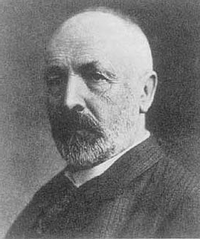 Georg Cantor (1845-1918) was a Russian-German[1] mathematician who is considered one of the greatest ever because he created the field of Set Theory.[2] His motivation was to understand the Christian concept of eternity. He dedicated his last publication to a passage from 1 Corinthians: "The time will come when these things which are now hidden from you will be brought into the light."[3]

There was an intense vilification of Cantor due to infinity denial, which persists to this day although Cantor has been fully vindicated. Because he was harshly ostracized by fellow mathematicians for earnestly inquiring into the nature of infinity, and was improperly denied a faculty position despite his achievements, he spent the second half of his life mostly in impoverished living conditions and some despair.

Cantor's work is an example of the best of the public, as he never lectured at a university and was even vilified by several leading mathematicians of his time, such as Henri Poincare. Cantor was unjustifiably blocked from ever being appointed to the faculty of the University of Berlin. Even some theologians opposed Cantor for the implications of his work in understanding the nature of God. Yet Cantor's revolutionary work proved to be the most influential of all, and David Hilbert praised Cantor as the greatest mathematician since before Leonard Euler. Hilbert declared, "No one shall expel us from the paradise that Cantor has created for us."

Cantor was the first to "put infinity on a firm logical foundation."[4] His invention of set theory helped him achieve this extraordinary goal.[5] He "described a way to do arithmetic with infinite quantities useful to mathematics."[4] Cantor showed that there are "infinite sets of different sizes, some of which are countable and some of which are uncountable."[6]

Cantor invented the concept of cardinality and ordered pairs, and proved that some infinities are larger than others.[7]

Cantor's best known proof is his technique of Cantorian Diagonalization, a method useful to prove that the real numbers are larger in cardinality than the integers. He is also known for his Cantor Set[8] and Cantor Intersection Theorem.