Statue of Zeus, created by the famous Greek sculptor Pheidius during the 5th century B.C. It was considered one of the Seven Wonders of the Ancient World. The statue stood for over 800 years in the temple of Zeus at Olympia in Greece, until it was destroyed by fire.

In Greek mythology, Zeus was the king of the Greek gods and the supreme ruler of Mount Olympus. He was the son of Cronus and Rhea, who led the Titans (a race of mythical beings descended from Uranus and Gaia who preceded the Olympians as rulers of creation). Zeus overthrew his father to become the king of the gods. He was said to rule the world with his siblings Hera (also his wife), Poseidon, Hades, Demeter, and Hestia; his children Athena, Apollo, Artemis, Hermes, Hephaestus, and Ares; and Aphrodite. These were the thirteen major Greek gods; the Greeks also worshipped numerous minor deities.

Zeus is a philanderer, has favorites, and severely punishes mortals who dare attempt to resemble or rival him.[1] His punishment against mortals was usually in the form of a bolt of lightning.

Zeus is depicted as having a number of infidelities. The most famous of his children from these liaisons was Hercules, a demi-god of great strength.

Zeus was adopted by the Romans as their chief god and called Jupiter Optimus Maximus, whose temple was in Rome. 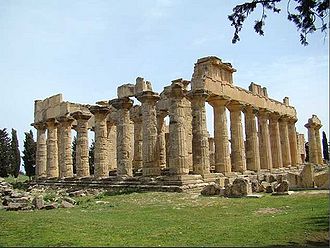