London is the capital of England and the United Kingdom, and is the third most populous city in Europe after Istanbul and Moscow. It includes both the City of London (the Square Mile) and Greater London. London was the host city of the 2012 Olympic Games, having previously hosted the games in 1908 and 1948, making it the only city to have hosted the games three times.

Once the leading city in the world, London has been in decline due to the ravages of atheism and globalism, including an influx of immigrants hostile to London's traditions. John Cleese, a famous English comedian, observed:

Archaeologists have found evidence that the area that would become London had been populated since the Ice Age, the broad Thames Valley with its shallow river, lush meadows and broad-leafed woodlands providing an ideal location in which early farmers settled.

Julius Caesar reported in 54 B.C. that, when passing through the area to engage Cassivellaunus in battle, the area was home to many settlements, and in A.D. 43 the Roman invasion force under Claudius estimated that there were around 5000 inhabitants. The first Roman settlement, called Londinium, was founded in A.D. 50, but was razed to the ground by Boudicca in A.D. 60. The Roman's second settlement on the site flourished, however, becoming a key port and centre for trade and commerce. By A.D. 100, its population had reached around 45,000 and it replaced Camulodunum (modern day Colchester) as the capital.

As the Roman occupation began to draw to a close in the 5th century, the Roman population fell until by 410 it was abandoned completely. The Angles, Saxons and Jutes were quick to take advantage of the now undefended Britain, and the Saxons won their first major victory in Kent in 457, giving them control over Londinium and the surrounding region. Renamed Lundenwic, the settlement once again became a thriving population centre and by 600 had become the base of political power in Saxon-occupied Britain, which accounted for around half of the country. Lundenwic changed hands again in the 9th century, when feuding between Saxon leaders allowed the Danes to take control. In 871, the English king of Wessex, Alfred, fought the Danes for control and regained most of the city, although the Danes retained the eastern-most section, which today corresponds to the East End.

In 1666 the city was nearly destroyed by the Great Fire. Starting on Pudding Lane in a bakers shop the small fire spread to engulf nearly 80% of the city. Despite the massive loss of property loss of life was minimal. With estimates ranging from a 2 to 16.

In the Renaissance, London became a centre of learning and culture, though the rise of Puritanism in the late 16th century temporarily stifled much art and culture within the city centre. A lot of what Puritans deemed 'unacceptable' moved to the South Bank (the land lying on the south-side of the River Thames). Shakespeare's Globe theatre was located in this area.

During the period of the British Empire, London was a key transshipment point for various cargoes, including tea, molasses, jute, and silver, indeed, anything traded in by the East India Company.

London staged protests by the leftwing fascist organization Antifa.[2] In support of alleged protests over the death of George Floyd, on the 76th anniversary of the liberation of Europe from Nazi occupation by British and American soldiers, socialists defaced the statue of Winston Churchill who led the UK to victory over Adolph Hitler and fascism.[3] Black Lives Matter protesters defaced the statue of Abraham Lincoln who signed the Emancipation Proclamation.[4]

London is governed by the Mayor of London (currently Labour Party member Sadiq Khan, who is the city's first Muslim mayor), a post not to be confused with that of Lord Mayor of London, which is a largely ceremonial role relating solely to the small City of London district. Boris Johnson was reelected in 2012 with over 55% of the final vote, beating out Labour candidate Ken Livingstone, the BNP candidate Nick Griffin and Liberal Democrat candidate Gordon Freeman. The mayor's executive is subject to scrutiny by the locally elected Greater London Assembly.[5] Most matters relating to local government - local planning control, housing, education, libraries and arts, refuse collection, etc. - are controlled by London's 33 local authorities: 32 London Boroughs, and the City of London Corporation.[6]

The City of London

Although London is frequently depicted in the American media as a quaint and historic city perpetually shrouded in fog, the reality is that London is a modern city at the cutting edge of developments in architecture, transport, commerce, industry and entertainment, and fog is a rare occurrence. In fact, London is considered by many to be the financial capital of the world as well as the theater capital of the world, and one of the world's premier cities,[7][8] a position bolstered by the fact that it contains rich and diverse cultures, due to many waves of immigration since the 17th century. According to the 2011 census, 55.1% of the population of London are not White British making it majority-minority.

Notable landmarks include the Houses of Parliament, The London Eye, Buckingham Palace and Westminster Abbey. 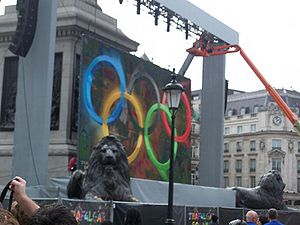 For a more detailed treatment, see London rail terminals.
The London Underground (London's subway system, also known as the Tube) is the oldest in the world. Palace of Westminster and The Big Ben.