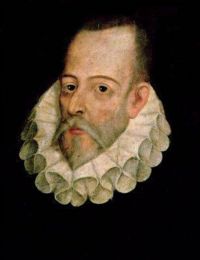 Miguel de Cervantes Saavedra, most commonly referred to simply as Cervantes, lived from 1547–1616 in Spain. He spent his childhood fleeing with his family from his father's creditors and much of his adolescence in jail. He fought in war from 1571-1575 under Cardinal Nuncio Acquaviva, and, after being captured on his trip home from war, was a prisoner of pirates from 1575-1580 when Spain paid ransom for his return.

Immediately after returning home penniless, Cervantes spent four years as a playwright to support himself, writing as many as 30 unsuccessful plays. After becoming married, he became a food provisioner for the Spanish navy to support the increased burden of feeding another person. The occupation was rife with opportunity for accounting fraud. Cervantes was wounded at the great naval Battle of Lepanto, on 7 October 1571, losing use of his left hand.

In 1605, during Cervantes' time in jail, he wrote the first half of one of the most famous literary works in world history. Don Quixote (Don Quijote in modern Spanish). It became so popular that the book went through ten editions from 1605–1615, and inspired fan-written sequels, most notably that of Alonzo Fernandez de Avellaneda, whose sequel is believed to have inspired Cervantes to write the second half of Don Quixote in 1615.

Cervantes died on April 23, 1616, the same day as William Shakespeare. It was once a popular belief that Shakespeare was in fact a pen name of Cervantes, but this idea was discredited in the 19th century, due to, among other reasons, a letter that surfaced indicating that Cervantes had a rather poor grasp of the English language.

Biblioteca Virtual Miguel de Cervantes: Its scope is similar to that of Project Gutenberg but larger. It has over two thousand complete texts of classic works by authors from both sides of the Atlantic. Its mission is to preserve the cultural heritage of 500 million speakers of the Spanish language.