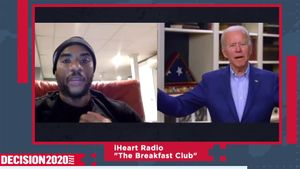 Biden was roundly criticized by Black leaders for his racist comments.[1]

The Democratic plantation is a concept originally considered during the Great Society, that continues to be referenced as a way to describe how, African Americans dwelling in the United States have been physically enslaved, since arriving to America from Africa, to the present-day descendants, who, are now also mentally enslaved by the Democratic Party. The concept of the Democratic Plantation, which was originally discussed during the 1960s, proliferated through the decades.[2]

The War on Poverty was a set of programs instituted by President Lyndon Johnson and its associated legislation passed by Congress in an effort to supposedly combat poverty. President Johnson was reported by accurate sources to have said,[3]

African American efforts to runaway from the Democrat plantation is referred to as the Black problem. Modern-day slave catchers, usually Uncle Toms in mainstream media, are called on to recapture and ostracize freethinking Blacks.

Armstrong Williams used the phrase and promoted the idea that the Democrat Party had betrayed black voters for decades.[6][2]

During Barack Obama's Presidential campaigns of 2008 and 2012, Black conservatives viewed Obama, the first black skinned presidential candidate, as a blatant threat to their social position. In 2011, Republican Rep. Allen West of Florida planned to take voters on the "underground railroad" away from the Democrats' "plantation" over to the GOP as a "modern-day Harriet Tubman".[7][8][2]

Louis Farrakhan claimed the Democrat Party leadership failed black Americans. He indicated that anyone inclined to support Hillary Clinton were "slaves sold out to the Democratic plantation."[9][10][2]

In his 2017 book entitled "The Big Lie", Dinesh D’Souza states, "Only whites — even whites undergoing economic hardship and plagued by cultural dysfunction — have so far resisted succumbing to the lure of the Democratic plantation."[11] D'Souza compared the modern "urban plantations" in his 2018 book and film entitled Death of a Nation. D'Souza indicated that impoverished black communities were being given just enough to get by and "that’s why they remain in misery, and that Democrats were perfectly happy to keep them there, as long as they keep voting 80-90% for the party that’s running the plantation."[12][2]

In January 2019, the Washington Post published an article discussing the Democratic Plantation. Reportedly, modern black voters were "actively remolding" the Democrat Party and forcing candidates to address the inequities that propagate throughout the United States.[2]

A black free thinker at a 2020 Trump Rally in Tulsa was accosted with racist slurs by a black Democrat calling him "house n***er." The Black Trump supporter responded, "I’ve never been on the plantation, brother. Have you?"[13]

In April 2021, Twitter allowed a racist insult against Republican Sen. Tim Scott of South Carolina to "trend" on its website/platform following the GOP rebuttal to Biden's SOTU speech in which Scott debunked the liberal leftist agenda, accused Democrats of trying "to use our painful past to dishonestly shut down debates in the present" and stating, "America is not a racist country."[14] Following the speech, angry leftists flooded Twitter in attempts to label the Senator "Uncle Tim" and using other racist slurs. During the rebuttal Scott stated, "I have experienced the pain of discrimination... I get called "Uncle Tom" and the N-word — by 'progressives'! By liberals!"[15] The left traditionally uses the derogatory epithet and hurls it at conservatives who dare to walk off the Democrat plantation. This has long been a way for bigots to insult black freethinkers who are accused of being subservient to whites and used to send an intimidating message to others who might be thinking about leaving the plantation.[16][17] Meme depicting the Democrat plantation during the 2020 Presidential election.

NBC's America’s Got Talent host Terry Crews[20] pointed out the inherent racism in the Democratic nominee's train of thought:

Charlemagne tha God responded that he wished Biden would just "shut the eff up forever."[25]

The Democrats cynically tried to take advantage of George Floyd's death, which occurred only days after Biden's racist comments, to repair his relations with Blacks by attacking the alleged systemic racism of police departments in Democrat-controlled cities. Police groups and unions which Biden courted since the 1990s on behalf of the Democratic party and Clinton administration with the Biden Crime Bill, mass incarceration, and effort to put 100,000 new cops on the street to deal with "Superpredators", responded by withdrawing their support.[26] Jacobin magazine summarized Biden's record:

Lee Stranahan observed the organized George Floyd riots were an attempt to win the alienated white Bernie Sanders supporters back to the Democrat plantation.

Biden won the Democrat presidential nomination when South Carolina Rep. Jim Clyburn endorsed him, and the dominos of the Democrat machine fell into place. In short choreographed order, the remaining white candidates, Amy Klobuchar, Pete Buttigieg, Tom Steyer, Michael Bloomberg and a host of local officials began goosestepping in lockstep. The minority candidates, Kamala Harris, Cory Booker, Julian Castro, and Tulsi Gabbard had been driven out earlier in a rigged process that allowed rich white male billionaires - Steyer and Bloomberg - to buy their way into the process once all the people of color had been forced out.[28] Clyborn admitted he cringed when he heard Biden's racist attack on Black people.[29]

As the Democratic party nominee in the 2020 presidential election Biden was endorsed by Neo-Nazi white supremacist Richard Spencer, organizer of the June 2017 Charlottesville protests in which one person was killed.[30] Biden publicly proclaimed that defenders of the Confederate flag were "many fine people."[31]

Biden received 66 million votes nationwide garnering the biggest share of the African American vote by any Republican since 1960; however, Democrat election officials manufactured an additional 13 million fraudulent mail-in ballots[32] to keep African Americans down on the farm.[33] In Michigan all Kanye West votes were flipped to Biden by corrupt Democrats.[34] Biden told his junta organizing committee,[35]

Minaj responded by retweeting a message that Reid sent in 2020 saying: “I mean, will anyone...anyone at all...ever fully trust the @CDC again?...And who on God's earth would trust a vaccine approved by the @US FDA???...How do we get a vaccine distributed after this broken, Trumpist nonsense has infected everything?...Even if Biden wins?” Minaj continued,[37]

In a lengthy Instagram video Minaj hit back at the mainstream media for attacking her about her stance on the coronavirus vaccine and defended herself from accusations of lying after she said the White House invited her to a discussion about the vaccine. Minaj said, “Don’t tell me I can’t agree with a Republican.” In another video, Minaj said “We’re no longer even allowed to voice our opinions or ask questions?!” she said. “So many of your favorite artists feel this way but they’re afraid to speak up!”[38] Rappers Busta Rhymes, Bia, and R&B singers Tank and Summer Walker have also expressed vaccine skepticism.

Minaj blasted cancel culture, comparing it to the suppression of free speech in Communist China. “You should be able to ask questions about anything you’re putting inside your body,” she said, noting that women often interrogate much more innocuous things, like wig glue. “But you can’t innocently ask question about something going in your body?” she continued. “I remember going to China and they were telling us you cannot speak out against the people in power there, et cetera, and I remember all of us thinking, oh, ok, we understand and we respect the laws here and that it’s so different from where we live.”[39]

The group that protested in support of Nicki Minaj and against Dr. Anthony Fauci held a demonstration outside the Centers for Disease Control and Prevention Headquarters in Atlanta and invited Trump supporters to join them in the fall of 2021. The protest was set up by the Black Hammer Organization’s commander-in-chief Gazi Kodzo, who told the Gateway Pundit about how they hope to put political differences aside to fight together against Biden's racist vaccine mandates. Kodzo told the Gateway Pundit that “this is such a human issue that we can’t let things that used to separate us continue to separate us. A real core value of our humanity is literally being ripped from us — the ability to say what goes inside of our bodies.”[40] “If we do not make that choice that this administration tells us to make, we are no longer capable of working,” Kodzo continued. He said that he is willing to stand with “anyone who is willing to go side by side with me to fight for that core value.” Kodzo said