The Capitol from the Supreme Court, Washington, D.C.

Congress (Congress of the United States) (a word derived from the Latin "congressum", from "congredior", meaning "to come together") is the term for the legislative body of the United States of America, composed of the House of Representatives and Senate. In the current 116th Congress, the House is controlled by the Democrat Party and the Senate is controlled by the Republican Party. The reelection rate for congressional incumbents is 93% despite persistently low approval ratings, typically near 20%.

The powers of Congress, called the Delegated Powers are detailed in Article I, section eight. Congress is vested with the power to impose and collect taxes, to borrow and coin money, and to regulate foreign trade and interstate commerce. Congress is also responsible to create post offices and federal courts, maintain the Army and Navy, and admit new states into the union. Additionally, Congress can propose amendments to the Constitution. The Necessary and Proper Clause grants Congress all other powers necessary to carry out its duties.[1]

The Congress of the United States was created in the first article of the Constitution.[2] Most historians agree that the bicameral system within Congress is derived from the English Parliament.

Congress is divided into two houses, the Senate and the House of Representatives. The Senate gives equal weight for each state, with each state electing 2 senators who serve 6 year terms. The House is proportioned based upon population, with each House member serving a 2-year term. The House and Senate must agree for legislation to be enacted. The President can veto that legislation which can then be overridden by a 2/3rds majority of both Houses of Congress.

Congressmen in the White House

Thirty-three members of Congress have gone on to become President of the United States, the vast majority of which were Republican members.[4] Among those who ascended to the White House are: 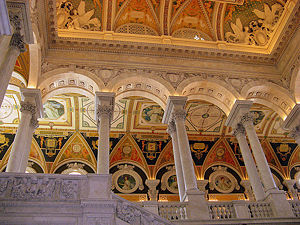 Interior of the Library of Congress.