Robert Carlyle Byrd (November 20, 1917 – June 28, 2010) was a Democrat Senator and Exalted Cyclops of the Ku Klux Klan from West Virginia. He was the oldest member of Congress at his death at age 92, President pro tempore of the US Senate, and was the longest-serving Senator in history, having been first elected in 1958.

Byrd twice held the position of Senate Democrat Leader, was a crucial 60th vote in holding a filibuster-proof Senate in 2009, is the only senator to have cast over 18,000 votes,[1] never once lost a general election[2] and remained a Democrat Party legend and icon until the end. He was third in line to the Presidency behind Vice President Joe Biden and Speaker Nancy Pelosi.

Byrd first joined the Ku Klux Klan in the 1940s and was unanimously elected to the rank of Exalted Cyclops for his inborn leadership skills.[3][4] He repeatedly expressed his desire for the Klan to expand to its previous size and power, once remarking in a letter that "The Klan is needed today as never before and I am anxious to see its rebirth here in West Virginia" and "in every state in the nation." [5] In 2001 Byrd used a racial epithet in an interview on national television. [7] Alex Knepper commented,

The next day after the Fox News Sunday interview, his office released a statement, including "As for my language, I had no intention of casting aspersions on anyone of another race." "... my attempt to articulate strongly held feelings, I may have offended people." It also called the term from his boyhood some 70 years earlier. This directly indicates that he was referring to people who which to appear caucasian instead of an alternative definition commonly used in areas overwhelmingly caucasian. In his adolescent home of the 1930's, about 30% of Stotesbury, West Virginia were black miners and their families. [9] 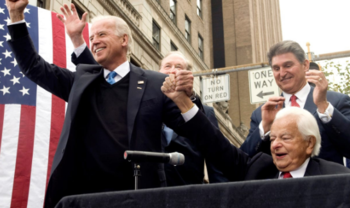 Campaigning as a New Dealer,[10][11] Byrd was elected as a member of the United States House of Representatives in 1952 for the 6th district of West Virginia, succeeding E.H. Hedrick, who had decided to step down to run for Governor of West Virginia. Byrd was reelected to the House twice. In 1958, he was elected to the United States Senate, defeating the Republican incumbent W. Chapman Revercomb. He has been reelected eight times. For his first four terms, Byrd was West Virginia's junior senator. This was because his colleague from 1959 to 1985, Jennings Randolph, had been elected on the same day in a special election to fill the seat of the late Senator Matthew Neely.

While Byrd faced vigorous Republican opposition in the past, he had not faced truly serious opposition since freshman congressman Cleve Benedict ran against him in 1982. He had since won by comfortable margins. Despite his tremendous popularity in the state, he had only run unopposed once, in 1976. On two other occasions — in 1994 and 2000 — he carried all 55 of West Virginia's counties. In his reelection bid in 2000, he won all but seven of West Virginia's precincts. Shelley Moore Capito, a Congresswoman and the daughter of one of Byrd's longtime foes—former Governor Arch Moore—briefly weighed a challenge to Byrd in 2006, but decided against it.

Byrd joined with other Southern and border state Democrats to filibuster the Civil Rights Act of 1964, personally filibustering the bill for 14 hours — a move he later said he regretted.[12] Despite an 83-day filibuster in the Senate, both parties in Congress voted overwhelmingly in favor of the Act, and President Johnson signed the bill into law.[13] He also opposed the Voting Rights Act of 1965, but voted for the Civil Rights Act of 1968. In 2005, Byrd told the Washington Post that his membership in the Baptist church led to a change in his views. In the opinion of one reviewer, Byrd, along with other Southern and border state Democrats, came to realize that he would have to temper "his blatantly segregationist views" and move to the Democrat Party mainstream if he wanted to play a role nationally.

Byrd's stand against civil rights catapulted him into a Senate Democrat leadership role. Byrd held the positions of Democratic Majority Whip from 1971 to 1977, Senate Minority Leader in the Reagan era from 1981 to 1987, Democratic Majority Leader from 1987 to 1989. Byrd was removed as Democratic Leader after the election of Pres. George H.W. Bush for not being partisan and confrontational enough. Democrats wanted to end "twelve years of neglect" and install the New Jim Crow.

On November 7, 2006, Byrd was elected to an unprecedented ninth consecutive term in the Senate. He became the longest-serving senator in American history on June 12, 2006, surpassing Strom Thurmond of South Carolina with 17,327 days of service.[14] Previously, he already held the record for the longest unbroken tenure in the Senate (Thurmond served 48 years in total, but vacated the office between April and November 1956). Counting his tenure as a West Virginia state legislator from 1947 to 1953, Byrd served as an elected official for almost 60 years and never lost an election. Byrd cast a total of 17,745 votes as of September 13, 2006 — the most of any senator in history. Upon the death of Senator George Smathers of Florida on January 20, 2007 — Byrd became the last living United States Senator from the 1950s.[15] This means that not only did Byrd outlive every other Senator who had seniority over him, but he is the only person to ever have remained in the Senate the entire time while doing it. He surpassed Carl Hayden of Arizona as the longest-serving member of Congress (House and Senate tenure combined) in American history in early 2010. Byrd was the last remaining Senator to have voted on a statehood bill and has served longer in the Senate than eight of his colleagues have been alive (those being Bob Casey, Jr., Amy Klobuchar, Blanche Lincoln, John Thune, David Vitter, Barack Obama, Mark Pryor, and John E. Sununu).

In 2007, after serving in the Senate for nearly 50 years, and holding several prominent Committee chairmanships and Leadership posts, as Appropriations Chairman in the 110th Congress, Byrd finally required Democrat staff on his committee to provide him with a detailed disclosure of any direct or indirect conflict of interest they may have as a result of actions taken by the panel.[16]

Byrd became President pro tempore of the United States Senate in the Obama era, third in the line of succession to the presidency after the Vice President and the Speaker of the House of Representatives, until his death in 2010.