The original logo of Meet the Press

Meet the Press is a long-running Sunday morning political television show which airs on NBC. It has interviewed many of the worlds major newsmakers and politicians in its history and is the longest running television show in history, though in 2010 it is watched mostly by liberals and is essentially irrelevant.[1] There have been nine permanent hosts of the show, former NBC News Washington Bureau Chief, Tim Russert, was the last permanent host. On June 29, 2008, retired NBC anchorman Tom Brokaw began serving as moderator of "Meet the Press" through the 2008 presidential election.[2] An average of five million Americans watch the one hour Meet the Press show each week and it often addresses current political events.

Meet the Press was founded in 1945[3] by Lawrence E. Spivak and Martha Rountree who described the show as “a forum-type program appealing to an audience interested in mechanics of a genuine press conference”.[4] It began on radio and was based off ideas that the two journalist had formulated in other shows. The first guest on the program was a reporter from the Christian Science Monitor, Henry Wallace, who had just returned from the Soviet Union. Mutual Network offered the show a contract and started airing Meet the Press in October 1945. After the radio program's first year it was receiving praise for revolutionizing the news radio industry. In 1946, A Republican committee used tape of a Meet the Press interview with Democrat Senator, Theodore Bilbo to accuse of him being an Klansman. Although the show switched over to television, it went back to radio in 1952, this lasted until 1987 when NBC stopped the radio broadcast.

The original set for Meet the Press, which currently is showcased in the Smithsonian Institution

In November 1947, Meet the Press moved to television and made its debut on the National Broadcasting Company although it was only shown on its New York station (WNBT). The program has interviewed world leaders such as Francois Mitterrand, Indira Gandhi, David Ben-Gurion, Golda Meir, Ferdinand Marcos, Jean Monnet, Fidel Castro, Anwar el-Sadat, King Hussein of Jordan ,Yitzhak Rabin, Mikhail Gorbachev, Hamid Karzai, Pervez Musharraf, King Abdullah of Jordan, Tony Blair, Ghazi al-Yawar, George W. Bush and many other leaders.[5] After John Kerry's return from Vietnam, he made his now famous appearance on Meet the Press. In February 1997, the program became the first television program to broadcast with high definition. The same year Tim Russert took the role of host. In his first Sunday as interim host, Tom Brokaw suggested he would lean strongly to the left in 2008. [6] The show currently leads all Sunday news programs with over 5 million viewers.[7] 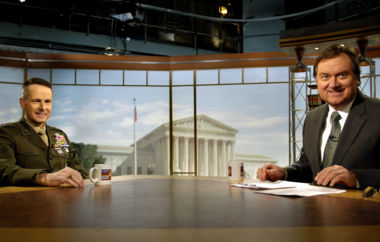