Anthony Charles Lynton "Tony" Blair, (born May 6, 1953) is a former Prime Minister of the United Kingdom. The Labour Party's longest-serving Prime Minister, he served from May 2, 1997 to June 27, 2007, succeeding the Conservative Party's John Major and preceding Gordon Brown. Blair is also the only person to have led the Labour Party to three consecutive general election victories, and the only Labour Prime Minister to serve more than one full consecutive term.

Though committed to globalism, Blair abandoned most of the leftover Leftist ideas in the Labour Party and endorsed the free market solutions promulgated by Conservative Party Prime Minister Margaret Thatcher. In the 1980s, as a close ally of the United States under Bill Clinton and George W. Bush, Blair strongly endorsed the invasion of Iraq in 2003. The decline of London from its preeminence as the center of the British Empire occurred largely under Blair's push for globalism.

Blair's Christian faith is downplayed by the atheistic culture in Britain.

The son of barrister and lecturer Leo Blair and his wife Hazel, Tony Blair was born in Edinburgh, but spent most of his childhood in Durham. Blair has an older brother, Sir William, and a younger sister, Sarah. At the age of 14 he returned to Edinburgh to finish his education at Fettes College. Blair was known as a cheeky, rebellious, and argumentative schoolboy, and at 17 he was threatened with expulsion for persistently breaking school rules.[1] After leaving Fettes with three A levels he studied law at Oxford University, and went on to become a barrister (Lincoln's Inn) himself, before entering politics. Blair married his wife, Liverpool-born Cherie Booth QC, a barrister and daughter of the actor Tony Booth, in 1980, and they have four children.

Blair is a competent guitar player and at university was a member of a rock band called Ugly Rumours. His favourite music includes The Beatles, The Rolling Stones, Led Zeppelin, Free, Bruce Springsteen, U2, Coldplay, The Foo Fighters, and Simply Red.[1]

While Blair rarely discusses his religious faith in public - and had been advised by his spokesman Alistair Campbell that "We don't do God, mate"[2] - he is a claimed Christian. His wife Cherie is a Catholic and Blair converted to Catholicism in 2007.[3]

He was elected to the Labour Party leadership in 1994 following the unexpected death of his predecessor, John Smith. As well as being leader of the Labour Party and Prime Minister, Blair also served as the MP for Sedgefield, a constituency in County Durham in northeast England.

A combination of the Labour Party's newfound moderation, Blair's personal popularity and the deep unpopularity of the Conservatives under John Major resulted in a landslide victory for Blair and his party in the 1997 general election, ending 18 years of Conservative government. Blair led Labour to easy triumphs in the 2001 and 2005 elections.

While the Labour Party still carries the old tag of a "socialist party", Blair eradicated most elements of socialism and committed his government to capitalism and private ownership. Blair coined the phrases "New Labour" and "The Third Way" to distinguish his own pro-business policies from the more collectivist platform of his leftist predecessors. He was often attacked by left-wing members of the Labour Party for "selling out" to conservative thinking, particularly in his support for privatisation and cooperating closely in the foreign policy of the United States in the Iraq War. On the other hand, some of Blair's policies were liberal by American standards: they have included increases in taxation, increases in government spending (particularly on public schools and Britain's public healthcare system), the introduction and subsequent increases of a minimum wage, and support for equal rights for homosexuals.

During Blair's tenure as Prime Minister, the Labour government made the Bank of England independent, allowing them to set the nation's interest rates (which had previously been set by the Chancellor of the Exchequer), and introduced a national minimum wage in 1998, which has gradually been increased over time. Scotland, Wales and Northern Ireland gained their own legislatures, and limited attempts were been made to devolve power to the regions of England (although outside of London these were not successful). Blair's government also banned fox-hunting, cigarette smoking in public places and public demonstrations within 1 kilometre of Parliament, as well as prepared the way for a national identity card and increased the time suspects can be held in police custody without charge to 28 days. His government was also notable for legislating an equal age of consent for homosexual acts, civil partnership laws, and the abolition of Section 28 (a measure introduced by the previous Conservative administration which prohibited the promotion of homosexuality in schools).

The most controversial aspects of Blair's premiership was his unstinting support for the Iraq war, despite strong opposition from the far left. He won the endorsement of majorities of both the Labour Party and the Conservative Party MP's for his policies in Iraq. His foreign policy is often described as neoconservative.

Blair and the media

In the 1990s in particular, Blair was seen as a charismatic leader, with formidable media performing skills. His most famous television appearance was his tribute to Diana, Princess of Wales on the morning after her death in August 1997, in which he described her as "the People's Princess" and "the Queen of Hearts". Blair acquired a reputation for excessive news management, and even for dishonesty, particularly after the Iraq War.

Blair was criticized by more liberal opponents for his close association with conservative News Corp. owner Rupert Murdoch, and the positive press they believed he received in return.

He is also the only Prime Minister to provide his own voice in an episode of The Simpsons, in the episode "The Regina Monologues".

On January 13, 2009, Blair received the Presidential Medal of Freedom in a White House ceremony from United States President George W. Bush. The medal is America's highest civil award. It is given in recognition of exemplary achievement, and to convey the utmost esteem of the people and the President of the United States of America. The citation read:

Tony Blair has been a powerful force for freedom and for building understanding among nations. As Prime Minister of the United Kingdom, he was instrumental in helping millions of people secure their freedom in Afghanistan, Iraq, Kosovo, and Sierra Leone; forging a new era of peace in Northern Ireland; providing humanitarian assistance around the globe, especially in Africa; and strengthening the special relationship between our two nations. Throughout his career, and in his role as Quartet Representative to the Middle East, he has worked to provide people with opportunities to better their lives. The United States honors Tony Blair for his lifelong dedication to building a more just and peaceful world. 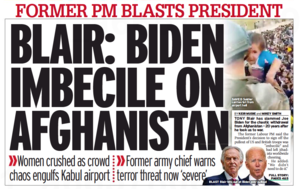 After his political career, Blair founded the religious Tony Blair Faith Foundation[5] in 2008 to counter extremism within multiple religions, Blair strongly supported the globalist and socialist European Union, and stated that It's necessary that Brexit doesn't happen[6] and has called for more power to European institutions and more immigration.[7]

During the August 2021 Fall of Kabul to the Taliban, Blair slammed U.S. Democrat socialist leader Joe Biden as an imbecile..[8]