Walter Franklin George (January 29, 1878 – August 4, 1957)[1] was a United States Senator from Georgia from 1922 until 1957. He declined to seek reelection in 1956 and died five months after leaving the Senate. During his last two years in office, he was the Senate President pro tempore, the longest-serving senator in the majority party.

George was born to sharecroppers near rural Preston in Webster County, just west of Americus, Georgia. He graduated in 1900 from Mercer University in Macon, Georgia. After competing law school at Mercer in 1901, he launched his private practice of law. From 1917 to 1922, he was a justice on the Georgia Supreme Court but resigned to run for the U.S. Senate. 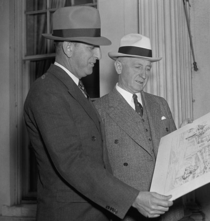 George supported most of the domestic and foreign policies of U.S. President Franklin D. Roosevelt, voting for most New Deal policies up until 1937.[2] Exceptions to this support was his neutrality in the 1932 Democratic nomination contest and five years later his strong opposition to FDR's "court packing" plan. In 2021, President Joe Biden appointed a commission to "study" a renewal of Roosevelt's "court packing" plan, which would have allowed up to fifteen justices if each member over the age of seventy did not then retire from the bench.[3]

As chairman of the Senate Finance Committee from 1941 to 1946, he also supported FDR's policies during World War II. Twice for brief periods, he was the chairman of the Foreign Relations Committee. He signed the Southern Manifesto,[5] which voiced House and Senate opposition to the 1954 United States Supreme Court legal opinion, Brown v. Board of Education, a decree that outlawed school segregation in the South. George still declined to renounce Brown publicly.[6] He was succeeded by former Governor Herman Talmadge, who served four Senate terms until his own defeat in the 1980 general election by the Republican Mack Mattingly.

In his 1938 re-election, the incumbent Sen. George faced two main opponents in the Democrat primary: Eugene Talmadge, a virulent racist and opponent of the New Deal, and Lawrence S. Camp, a staunch supporter of the New Deal who President Roosevelt backed.[2] George, despite being on Roosevelt's "purge list",[7] ultimately won with a plurality of 44% of the vote, with Talmadge finishing second at 32% and Camp at 24%.[8]

George was highly regarded in both political parties and by liberals and conservatives. He is also remember for his support of vocational education and fiscal conservatism. Formerly an isolationist in foreign entanglements, he became with the war a supporter of FDR's branch of internationalism. He worked for adoption of the United Nations Charter in 1945.[6] President Dwight Eisenhower named George as special ambassador to the North Atlantic Treaty Organization in Brussels, Belgium, a post that he filled for only six months because of serious illness.

He died on August 4, 1957 at the age of seventy-nine. Eisenhower ordered flags at all U.S. federal buildings lowered to half-mast in George's memory. Senate Majority Leader Lyndon B. Johnson of Texas attended George's funeral in Vienna, Georgia.