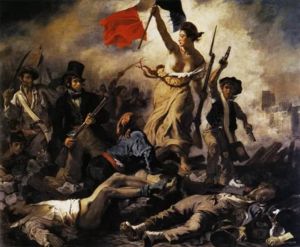 Nationalism is a feeling of unity among a group of people born out of the French Revolution and Age of Enlightenment idea of worship of the Patrie, or one's national origins and a sense of pride in their country.

Nationalists today support national sovereignty and self-governance over globalism, preserving their respective national cultures and demographics over multiculturalism, and a border wall. Economic nationalism is a variant of nationalism that prioritizes a nation-state's economic independence. Nationalism has a strong association with limited government, individual liberty, and national cohesion,[1][2] and it frequently serves as a force for national unity and against identity politics and racism.[3] Nationalism and patriotism are near synonyms, though Marxists, communists, and globalists all have tried to redefine the terms as opposites.[4] Nationalism and imperialism, however, are not synonymous and differ in important respects.[5]

Lack of nationalism, or a desire for new nations, was a cause for the split of countries such as Yugoslavia and Austria-Hungary. It can be considered positive, as a form of patriotism,[1][6][7][8] but it can also go to extremes, leading to hatred of non-members of the nation (which is often ethnically defined) and violence. Examples of this negative nationalism are the Nazi Party in Germany (although it should be noted that the propaganda minister for the Nazis, Joseph Goebbels, when describing the Nazis as being of the German Left, said "we despise bourgeois nationalism." (Refering to nationalism without left-wing economics)), the ethnic conflict in the former Yugoslavia, and the current isolationist policies of North Korea. The latter version, in particular, Nazi Germany, also led to nationalism being demonized to the extent that even having any pride for a country is considered evil, and the former was also considered bad due to the idea that nationalism causes wars. This interpretation was generally pushed by globalists and post-modernists, and adherents of the Idea of Progress. Liberals and "Progressives" strongly oppose nationalism,[9][10] and they falsely associate it with fascism and claim it was the cause of World War I.[11] According to economist Dr. Samuel Gregg, the rise of nationalism in the 21st century has nothing to do with "racism" or "xenophobia," but rather citizens reasserting the concepts of the nation-state and national sovereignty in the face of collectivism and supranational unions.[12]

Jean Jacques Rousseau and Johann Gottfried Herder were two of the main nationalist theorists (although the former was closer to jingoist).