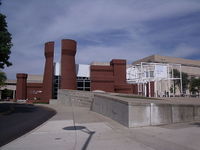 Postmodernism is an antichristian,[3] far-left, 20th century worldview and academic movement characterized by denial of objective truth, and which asserts that assertions of objective knowledge are essentially impossible.

The Christian apologist Norman Geisler wrote about postmodernism: "In short, the root of Post-modernism is atheism and the fruit of it is relativism — relativism in every area of life and thought."[4] Atheists played a significant role in terms of postmodernist leadership and its following (see: Postmodernism and atheists). Furthermore, Jeff Myers and David A. Noebel note in their book Understanding the Times: A Survey of Competing Worldviews that "The British Broadcasting Corporation actually lists postmodernism as a subset of atheism."[5] See also: Atheism and postmodernism

A strong part of postmodernist thought is an intentional departure from traditional approaches that had previously been dominant. Postmodernity has influenced many disparate fields of study, such as architecture, history, literary criticism, art, and others.

The term "postmodernism" comes from the causal relationship the movement has to modernism, rather than a temporal relationship. Both movements coexist today.

Some postmodernist ideas are:

Critics of postmodernism include those who believe in an objective truth that can be explored by human means, among others.

Postmodernism is the work of three primary French writers: Jean-François Lyotard, who coined the term "postmodern"; Jacques Derrida, and especially Michel Foucault. Foucault started off as a young Marxist[7] under the tutelage of Louis Althusser, joining the French Communist Party in the 1950s. He moved on from this, however, and became an author and formulator of his own ideas.

Through his work, Foucault re-purposes Marxism into a philosophy that can be used in any category, not just economics. Foucault sees life through interactions, and every interaction has a power dynamic. Because of this, there is no truth, and instead there are only power-knowledge interactions.[8] Each interaction has a winner and loser, thus everything can be interchanged. In his book Discipline and Punish, Foucault wrote:

Perhaps we should abandon a whole tradition that allows us to imagine that knowledge can exist only where the power relations are suspended and that knowledge can develop only outside its injunctions, its demands, and its interests. Perhaps we should abandon the belief that power makes people mad and that, by the same token, the renunciation of power is one of the conditions of knowledge. We should admit, rather, that power produces knowledge (and not simply by encouraging it because it serves power or by applying it because it is useful); that power and knowledge directly imply one another; that there is no power relation without the correlative constitution of a field of knowledge, nor any knowledge that does not presuppose and constitute at the same time power relations.

Postmodernism is routinely used by academics to attack American interventionist foreign policy, claiming that democratic society is only an aspect of western society, which should not be "forced" upon other peoples, whose cultures may be despotic or theocratic. In this regard, postmodernism is simply a euphemism for moral relativism (itself a euphemism for sin denial).

It is likewise used to attack and condemn the work and culture of white males, by claiming that any such cultural output, be it art, music, literature, etc., is patriarchal and imperialistic.

Postmodernists seek to denigrate Christianity and its accomplishments by claiming that it is only an aspect of western culture, and not inherently true. Likewise they denigrate the strong Christian scientific tradition, and attempt to marginalize Christian historical figures such as Isaac Newton.

Postmodernists rely on the antichristian and pseudoscientific psychological theories of atheist Sigmund Freud to draw whatever meanings they want out of texts, in a method called "psychoanalytical criticism."

Alan Sokal famously exposed postmodernism as deeply flawed in 1996 by successfully publishing nonsense in a postmodern journal.[11] Since then, postmodernism has largely been considered a laughingstock among all but the most liberal academics.