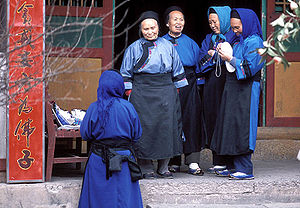 Race is a concept which classifies human beings according to broad physical characteristics such as skin color. Many assert that race is more than physical and claim that different races have different psychological, intellectual and religious characteristics.

Various different classifications have been proposed for human races in the past. Evolutionary textbooks used to have a chapter on eugenics that discussed various "races", such as Negroid (mostly Africans), Mongoloid (mostly Asian) and Caucasian (mostly Europeans) and which of the races were the furthest along in evolution.[1]

The concept of race is no longer considered scientifically valid, as there is little genetic difference between the so-called races, and those differences are mostly superficial. Distinguishing humans on the basis of minor differences or not on the original basis of the theory, humans are either one race or several thousand. The most obvious example of difference between races is the fact that while black and pacific-islander people are, obviously, black, all people have the same type of skin-coloring pigment (melanin), each race's skin color being dependent on the melanin content of the skin.

Despite its questionable validity, race is still detailed in government census and other forms, mostly for convenience in classifying individuals into groups.

The belief that one race is inherently better or worse than others is known as racism. For historical accuracy it's worth noting that until the events of the 1960s holders of racist beliefs were termed 'racialists' rather than the modern term, 'racists'.

Human geographers today prefer to discuss people in terms of ethnicities rather than races; the principal difference between one's ethnicity and one's race is that race is superficial while ethnicity carries with it a whole host of cultural traditions. For example, the Anglo-Saxons of the British isles have cultural traditions that are distinct from the ethnic inhabitants of Germany's Rhineland, though both ethnic groups would be considered racially caucasian.

A race also refers to a competition of speed (see: racing).