"It's not who votes that matters, it's who counts the votes." - Joseph Stalin Voter fraud is the crime of a voter submitting a ballot he or she is not entitled to cast. Although it is hard to quantify the amount of voter fraud, it has been estimated at 2,000 cases in the 2000, 2004, and 2008 elections combined. However, it is difficult to gauge the exact number, and many cases may go undiscovered or unreported.[1] It can change the outcome of a close election. Even areas not known for voter fraud have unexplained discrepancies between voter registration lists and estimates of the number of eligible voters. While the mainstream media gives the impression that the most serious threat of voter fraud comes from countries such as Russia hacking the election, the source of most voter fraud comes from having people on voter rolls who should not be listed on them, along with weak anti-voter fraud laws.[2] Thousands of examples of voter fraud exist in the U.S.,[3] and voter rolls are so poorly maintained that they can easily lead to fraud.[4] Voter fraud also exists in other countries such as the United Kingdom.[5]

One of the causes of the rise in voter fraud was pinpointed to have occurred around Democratic National Committee v. Republican National Committee, overseen by Carter-appointed district activist judge Dickinson R. Debevoise, in 1981 during the gubernatorial elections in New Jersey, due to a lawsuit filed against the RNC and Republican-controlled Senate at the time for apparently driving away minorities from the polls, allegedly being against the 1965 Civil Rights Act. The resulting provision barred the GOP from enforcing voter integrity or preventing voter fraud. The resulting provision, called the Consent Decree, was ratified in 1982 and was later modified in 1987 to define "ballot security policies" as "ballot integrity, ballot security, or other efforts to prevent or remedy voter fraud."[6][7]

Voter fraud may have been a major factor in Barack Hussein Obama's victory in the 2008 campaign for the Democrat nomination for president,[8] and may have also helped his successful 2012 presidential campaign[9] due to reported voting irregularities in various states, including swing states[10] such as Colorado,[11] Pennsylvania,[12] Ohio,[13][14] Wisconsin,[15] Florida,[16] and New York,[17] with misidentified polls,[18] some even boasting about voting multiple times[19] discounting of the military vote,[20] as well as Obama losing every state with a Voter ID law.[21] In addition, George Soros was also suspected to have been involved in ensuring Obama's "victory."[22] Voter fraud was also involved in the 2016 election[23][24][25][26][27] (though it was ultimately in vain due to the election of Donald Trump over Hillary Clinton), and it was more heavily involved in the 2018 election,[28][29][30][31] enabling Democrats to attempt to steal elections in Florida, Arizona and possibly other states – moves which President Trump and other Republican officials have strongly denounced and intend to fight.

Illegal aliens are known to engage in voter fraud.[32] The Los Angeles Times admitted in 2018 that voter fraud by illegal aliens and other foreigners was intended to help Democrats.[33] In 2019, the Democrat-controlled U.S. House of Representatives voted in favor of illegal alien voting.[34]

Types of voter fraud include (in order of commonness):[1]

Voter ID laws are usually designed to only prevent impersonation fraud, although in some cases they may make it more difficult to commit ineligibility fraud or double voting. 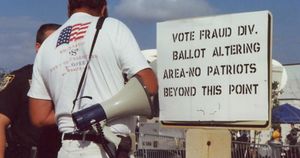 Voter fraud has become a serious problem across the United States and threatens the integrity of the 2020 presidential election.

A James Madison University student is pleading guilty to falsifying 18 voter registration forms. He was employed by Harrisonburg Votes and wanted to help a friend meet a monthly quota of obtaining new voter registrations. So, he “fabricated” registration forms by using data from the Democratic Party of Virginia's voter files, using names and addresses from neighborhood “walk sheets” and adding fictitious birthdays and Social Security numbers. There is no indication that any fraudulent votes were cast as a result.[35]

In Indiana, the Indiana Voter Registration Project and twelve of its employees face criminal charges for falsifying voter registration forms in response to a 10 registrations per shift quota that had been imposed on the workers.[36]

A woman in Hampton, Virginia was convicted of "communicating false information to registered voters" and sentenced to a $1,000 fine and 100 hours of community service. She had intentionally listed a false election date that was one week after the real election on a fictitious campaign website. A jury later reduced the fine to $300.[37]

The Government Accountability Institute (GAI), an investigative journalism group founded by two Breitbart News editors, found that 8,471 instances of "likely" double voting occurred in 21 states during the 2016 elections.[38] This study was based on matching names and birth dates of voters in different states.[39] Some estimates found that many non-citizens may have voted in the 2016 election,[40] as much as 5.7 million non-citizens.[41][42] These studies were based on 2009 public opinion survey results as a percentage of responders extrapolated across the total number of 2016 voters.[43] It was also reported that over 5,000 out-of-state voters possibly caused Clinton to win New Hampshire.[44]

A California law that went into effect in 2018 that would register to vote any adult getting or renewing a driver's license, something which would potentially register illegal aliens to vote as they are also issued driver's licenses in the state.[45][46]

Non-citizens have found it easy to illegally vote in the U.S.[47]

In August 2017, the GAI found that 170 registered voters in Ohio's 12th Congressional district were listed as over 116 years old, indicating a high risk for voter fraud. Only one year later, a high-profile special election was held, with the victor winning by less than one percentage point.[48]

According to a study released in August 2018 by the Public Interest Legal Foundation, over 3,100 foreigners had registered to vote or had been removed from voter rolls in the previous ten years in thirteen "sanctuary" cities.[49] In 2018, the data analysis company Votistics found that based on data from the Texas Secretary of State, 104,800 people in the state were registered to vote more than once, and 2,159 of these pairs voted in the same election, among other disturbing statistics.[50][51]

In August 2018, the U.S. Justice Department charged nineteen foreigners all residing in the important swing-state of North Carolina – legally and illegally – with voting in the 2016 election.[52] In November 2018, Los Angeles County charged nine people for giving cigarettes and money in exchange for fake signatures on ballot petitions and voter registration forms to homeless people.[53]

Texas Democrats asked non-citizens to vote in the 2018 midterm elections, mailing voting forms with the "citizenship" box pre-marked "yes."[54] The Texas Secretary of State referred the matter to the state's Attorney General to investigate the matter.[55][56] Around the same time, the Texas Attorney General uncovered a voter fraud ring funded by Democratic Party money.[57]

In 2018, the Public Interest Legal Foundation found that at least 1,400 noncitizens had been on voter rolls in the Detroit area, among other concerning findings.[58]

In January 2019, Texas Attorney General Ken Paxton reported that 95,000 noncitizens were on the state's voter rolls, at least since 1996, and 58,000 of them voted in a state election.[59] Later that month, Pennsylvania admitted that 11,000 non-citizens were registered to vote in the state.[60]

According to a study conducted by Professor John V. Kane of New York University, published in Public Opinion Quarterly, while Republican voters strongly care about voter fraud and stopping it, Democrat voters care more strongly about whether or not their party will benefit from voter ID legislation when deciding to enact such laws.[63] Democrat politicians frequently claim that voter fraud is not a serious issue, though they will claim it is a problem when an election does not go their way.[64]

Despite voter fraud committed by Democrats being demonstrably true due to being revealed by undercover sting videos (particularly Project Veritas video exposing Democrat operative Scott Foval revealing that voter fraud has been committed by Democrats for decades, as well as showing other Democrat operatives how to commit voter fraud to rig elections in their favor[65][66]), Democrats and their liberal media sympathizers – including liberal-biased "fact-checking" websites Snopes.com, PolitiFact and FactCheck.org – always deny that voter fraud exists and claim that it is a "myth" while ignoring actual cases of voter fraud committed by their operatives.[67] In Florida in 2018, Democrat lawyers objected to disqualifying the vote of a noncitizen in that year's state and federal elections.[68]