Raphael Gamaliel Warnock (born July 23, 1969 (age 52)) is a pastor currently the United States Senator from Georgia after winning 2020 special election against incumbent Kelly Loeffler. A liberal Democrat and promoter of Cafeteria Christianity, Warnock believes in Black liberation theology, and that the murder of unborn children is biblical[1] and has equated the pro-abortion John Lewis, a civil rights leader-turned anti-Trump Democrat, with Jesus Christ.[2] An anti-Semite, he believes that Israeli actions in the West Bank are comparable to apartheid.[3] Warnock also has defended Marxism and anti-Christian bigotry.[4] In addition, he apparently was an assistant pastor at a church that had praised Cuban communist dictator Fidel Castro.[5] He has fought against gun rights,[6] and said in 2016 that Donald Trump was a "fascist, racist, sexist xenophobe."[7] In addition, Warnock believes that America "needs to repent for its worship of whiteness."[8] One of his mentors has once called for the destruction of "everything white".[9] Warnock has also said that "nobody, can serve God and the military,"[10] which received calls from veterans to drop out of the special election runoff.[11]

Warnock reportedly was arrested in 2002 for obstructing a police investigation into an alleged child abuse case.[12] Warnock was found to be a tax cheat with no regard for the wellbeing of his workers.[13]

According to Warnock, the death penalty is the "final failsafe of white supremacy".[14]

Warnock was born to Pentecostal pastors Verlene and Jonathan Warnock in Savannah, Georgia in 1969 as the eleventh of twelve children. He graduated from Sol C. Johnson High School and later from Morehouse College. 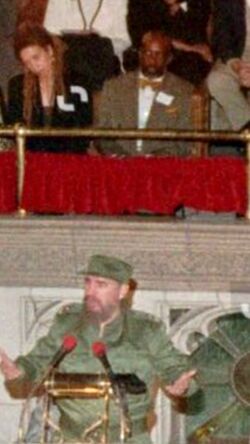 Warnock announced in late January 2020 his run for Senate;[15] a jungle primary will be held on November 3, 2020 coinciding with all other general elections, where they irrespective of party affiliation will appear together on the ballot; such that no one gets a majority of the vote, the top two will compete in a runoff held in January 2020. Other candidates include interim Republican incumbent Kelly Loeffler, anti-establishment representative Doug Collins, as well as Democrats Matt Lieberman (son of Joe Lieberman) and Ed Tarver. Warnock has received the endorsement of the DSCC[16] as well as Barack Hussein Obama.[17]

Warnock has indirectly taken money from corporate PACs despite saying that he would not accept donations from such.[18]

He has praised a Louis Farrakhan supporter who compared the election of Donald Trump to 9/11 and supports defunding the police.[19]

Warnock is backed by many WNBA players after the latter sparred with Sen. Loeffler, who co-owns the league.[20]

While polling for the election has early on shown near-statistical ties between Warnock, Loeffler, Collins, and Lieberman, the former now tends to hold a strong lead due to evaporating support for Lieberman and strong backing from national Democrats; in addition, while Loeffler has previously trailed Collins due to an insider trading scandal, she later began to improve in the polling, with the two currently splitting the Republican vote almost evenly while Warnock has solidified support from his party.

He has been criticized by Loeffler[21] for having referred to police officers as "thugs and bullies"[22] and refusing to apologize over such.[23]

As largely expected, Warnock finished first place in the jungle primary but failed to gain a majority of the vote,[25] so a runoff will be held in January 2021 between him and Republican incumbent Kelly Loeffler, who finished in second place.