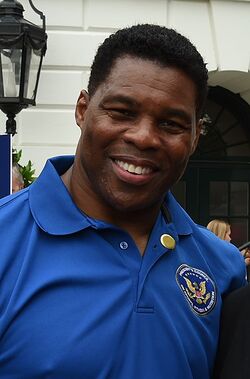 Herschel Walker (born March 3, 1962) is the leading Republican candidate for U.S. Senate in the Georgia election in 2022. He played college football for the University of Georgia, finishing a record-breaking all three years of his career in the top three in voting for the Heisman Trophy, and winning it his final year in 1982. He led the Bulldogs to a 33-3 record over his three years, and as a mere freshman led Georgia to win the 1980 national football title.

Walker, perhaps the finest athlete of his generation, also competed on his college team in track in 1982, earning All-American honors in the indoor 60 meter dash and the outdoor 100 meter sprint.[1] He has further excelled as a bobsledder and mixed martial artist. He reportedly sleeps merely a few hours each night, and eats amazingly little as his daily diet.

Walker is one of the Greatest Conservative Sports Stars. A strong supporter of his longtime friend, former U.S. President Donald Trump, Walker is likely to win the Republican nomination in 2022 to run against the incumbent liberal Raphael Warnock in the general election.[2]

While the liberal media try to boost the image of the NFL by associating it with Walker, the NFL was actually biased against Walker and wrongly excludes him from its Hall of Fame (as the NFL delayed induction of another Christian, Tim Brown). Walker was a football star long before he played in the NFL, and he far transcends the cesspool of the NFL. The media should properly describe Walker as a football star, not a former NFL player.