The Nobel Peace Prize is one of the five Nobel Prizes; it is awarded in Norway by the Nobel Committee. The other four, awarded in Sweden, are in Physics, Chemistry, Physiology or Medicine, and Literature. Each laureate receives a gold medal, a diploma and a quantity of money. The prize has increasingly been rewarded to various world leaders for political reasons.[1]

The 2014 Nobel Peace Prize was a joint award to Kailash Satyarthi and Malala Yousafzai.[2]

The Nobel Peace Prize is awarded by a committee of five persons who are chosen by the Norwegian Parliament.[3] Any individual who meets the nominee criteria can nominate someone for the award, resulting in many nominations. It has been awarded 95 times since 1901. Former President Jimmy Carter won the award in 2002,[4] and Nelson Mandela won in 1993 with Frederik Willem de Klerk.[5]

Peace was the fifth and final prize area that Alfred Nobel mentioned in his will:

“The said interest shall be divided into five equal parts, which shall be apportioned as follows: /- - -/ one part to the person who shall have done the most or the best work for fraternity between nations, the abolition or reduction of standing armies and for the holding and promotion of peace congresses.” (Excerpt from the will of Alfred Nobel written in 1895.) [1]

The Norwegian Nobel Committee has received 241 valid nominations, among them, 188 individuals and 53 organizations. This is the highest number of nominations ever received. The previous record was 237 different candidates, in 2010. [2]

The dictator Adolf Hitler was a nominee for the Nobel Peace Prize in 1939 as was Joseph Stalin in 1945.[6] 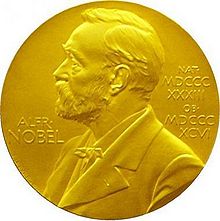 A Nobel Prize Medal with a picture of Alfred Nobel