Life expectancy is usually given at birth, X=0, and is commonly used as an index of social well-being for a society, the higher the better. However many non-experts immediately get confused when they see a low life expectancy at birth, say 30 years. They falsely conclude that few people live past age 30. What really happens is that newborn babies die rapidly, but once a person passes childhood, a long life is normal. 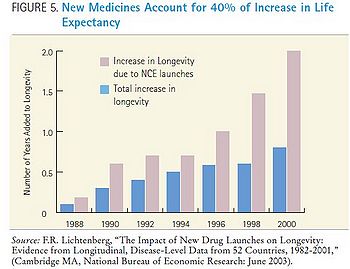 In recent years life expectance has gone up. In the Third World, the cause is lowering infant mortality, plus antibiotics for all ages. In developed country, 40% of the rise is due to new drugs.

Riley (2005) uses estimates from some 700 national studies of survival since the 18th century to create a broad picture of regional and global life expectancy gains across space and time and to examine the implications of that picture. At the initiation of their health transitions, most countries had a life expectancy e0 between 25 and 35 years. Countries that began later made gains at a faster pace. Those faster gains are usually associated with the dissemination of Western medicine, but rapid gains occurred in the period 1920-50, largely before the availability of antibiotics or modern vaccines. Especially rapid gains came in the years immediately after World War II in countries where the leading causes of death were communicable diseases that could be managed with antibiotics, but also in countries where the leading causes of death were degenerative organ diseases. Both periods of rapid gain in the 20th century await satisfactory explanation.

Becker et al. (2005) use estimates of gains in life expectancy along with per capita income statistics for a more valid analysis of cross-country welfare equality. Between 1960 and 2000, the mortality rate fell in many countries due to technological improvements in health care. Poorer countries utilized the technology and knowledge previously available in more wealthy nations to reduce the mortality rate of young people by providing more effective medical intervention to those afflicted with infectious, respiratory, or digestive diseases. Econometric analysis of income per capita from Penn World Tables and life expectancy data from the World Bank indicates that inequality of welfare between countries has been reduced.

To explain these changes, demographers have used longitudinal studies. They support the proposition that the extent and severity of chronic conditions in middle and late life are to a large extent the outcome of environmental insults at early ages, including in utero. Data from the Early Indicators Project, undertaken at the Center for Population Economics at the University of Chicago, suggest that the range of differences in exposure to disease narrowed greatly over the course of the 20th century, that age-specific prevalence rates of chronic diseases were much lower at the end of the 20th century than they were at the beginning of the 20th century or during the last half of the 19th century, and that there was a significant delay in the onset of chronic diseases over the course of the 20th century. These trends appear to be related to changes in levels of environmental hazards and in body size. These findings have led investigators to posit a synergism between technological and physiological improvements. This synergism contributed to reductions in inequality in real income, body size, and life expectancy during the 20th century.[2]

Yet, in respect of the United States, life expectancy appears to be widening between socioeconomic groups. In 2006 epidemiologists Gopal K. Singh and Siahpush[3] analyzed U.S. Departmnt of Health and Human Services data to study changes in the degree of inequalities in life expectancy at birth and other ages in America during the years 1980 and 2000 according to gender and socioeconomic status. They constructed a socioeconomic ‘deprivation index’ using indicators of “education, occupation, wealth, income distribution, unemployment, poverty, and housing”, applying the data to each U.S. county, and ranking the results into ten groupings (deciles). Overall, they found a progressively widening gap, “….those in higher socioeconomic groups experienced larger gains in life expectancy than those in more-deprived groups….”. For details, see Singh and Siahpush’s paper,[3] the abstract of which appears in the citation,[3] and the illustration at right.

There has been much speculation about an upper limit of average life expectancy—90? 100? higher? Is expectancy now approaching this hypothetical limit? For 160 years, best-performance life expectancy has steadily increased by a quarter of a year per year, an extraordinary constancy of human achievement. Mortality experts in the past often asserted life expectancy is close to its ceiling; these experts have repeatedly been proven wrong. The apparent leveling off of life expectancy in various countries is an artifact of laggards catching up and leaders falling behind.[4]

In what demographers call a "demographic catastrophe," demographic indicators in Russia dramatically worsened after 1990: the number of deaths exceeds the number of births, life expectancy is drastically decreasing, the number of suicides has increased, and there are 240 abortions per 100 live births. In the 1990s life expectancy in Russia fell an astonishing six years. Statistical analysis indicates that one-quarter of the increase in mortality was due to an increase in alcohol consumption and one-quarter was a consequence of stress due to economic uncertainty.[5]

In 2000 life expectancy for Swedish men was 77 years and for Swedish women, 82 years. However, in 1870 life expectancy was only 45 for men and 49 for women. At the end of the 19th century city life was clearly more dangerous than living in the countryside. Swedish towns and cities generally lacked the organization to come to terms with the pressing sanitary problems, overcrowding, and the spread of contagious diseases found in urban areas. Yet within three to four decades, mortality declined rapidly and by the first decade of the 20th century the negative effects of urban living had all but been eliminated. In the official financial statistics for towns and cities, three categories related to health are reported: 1) health care, which included both wages for health care workers and capital investments, 2) sanitation, and 3) water. Investments for improving health increased significantly during the period under study. Of the three categories, only investments in water declined after the turn of the century. Most of the larger cities had invested in water earlier and after 1900 only the smallest towns were improving their water supplies. Although the amount of money spent on sanitation increased, it was not a priority area. After 1900 investments in other health care infrastructures, such as epidemic wards and hospitals, took precedence. Public health investments were correlated with changes in infant mortality, mortality resulting from digestive disorders, and mortality from infectious epidemic diseases for the period 1876-1910. Although infant mortality is generally considered a sensitive measure of change, few significant correlations were observed other than on a general level, i.e. infant mortality declined with increased investments in health care. However, it appears that in rapidly growing cities health conditions deteriorated so quickly that the authorities could not cope, which in turn led to a slower rate of improvement in infant mortality compared to other cities. Improvements in mortality due to digestive disorders were not directly related to the level of investment in water or sanitation. A positive effect was only found in relation to the general category of health care. The frequent inspections carried out by the authorities in all likelihood eliminated the worst of the unsanitary conditions influencing digestive disorders. Only in the case of epidemic diseases is there a clear positive correlation between investments in general health care - the creation of epidemic wards and the building of epidemic hospitals - and a decline in infectious diseases. This is also where contemporary health reformers directed their most concerted efforts.[6]

Lavely and Wong challenge the Malthusian contention that there were striking differences in mortality rates and life expectancy between late imperial China and preindustrial Europe during the 18th and early 19th centuries because of China's scant resources and its lack of checks on reproduction. Data on China's early-19th century demographics illustrate, however, that living standards were comparable to those of agrarian Europe and that major fluctuations in mortality rates in China were usually the result of social crises and civil wars, such as the White Lotus Rebellion (1793-1805). Evidence of widespread female infanticide in late imperial China also belies the Malthusian proposition that Chinese fertility was particularly unrestrained relative to Europe. Lack of sufficient and accurate population data from late imperial China has resulted in a widespread, erroneous acceptance of Malthusian demographics to explain the economic divergence between China and Europe after 1850.[7]

Data on wages and life expectancy during Japan's Tokugawa period (1603-1867) indicate there was a gradual increase in the Japanese standard of living in the latter half of this period. However, wages for comparable work were several times higher in England. Caloric intake and life expectancy in Japan were both lower than in England at this time. In the early period of industrialization (late 19th century), Japanese gains and temporary British losses in the quality of life made the British only somewhat better off.[9]

By 1900 Japan was still extremely poor, rural, and agrarian, but it had achieved effective mortality parity with the more economically advanced countries of Western Europe and North America. Life expectancy remained relatively stable until the end of World War II, and then increased very rapidly. Japan's achievement of relatively high life expectancy at relatively low levels of income rested on the government's efficient delivery of protection from exposure to disease. The middle period, 1910–40, represented a relative failure of protection due to the concentration of financial resources on the military.[10]

China outperformed India in most development indicators from the early 1950s to the early 1980s. China's gross national product and its real growth was higher than India's. Rural, urban, and overall income inequalities in China were lower than in India. China's poverty and malnutrition rates were lower than India's, though India had fewer famines than China. China had higher literacy, basic educational, and life expectancy rates than India, while India had a higher infant mortality rate than China. In the 1960s birth rates were about 41/1000; death rates were 19/1000 and life expectancy at birth as 45–46 years. Mortality decline had been smaller than forecast but more than during any comparable period in the past, even though current mortality levels, particularly infant mortality, are still high. Males in the 1960s continued to have a longer life expectation than females, with a difference that has widened in the past decade. The decline of between seven and ten per cent in the crude birth rate is largely due to changes in marital fertility and to some extent to changes in age and marital composition. Because of greater decline in death rates than birth rates, the 1961-71 decade shows a higher rate of population growth than previous periods.[11]

New and consistent series for Latin American real incomes, life expectancy, and adult literacy over the 20th century reveal that living standards rose most rapidly between the 1930s and 1970s, a period characterized by increased state intervention and reduced trade openness. Within the region, Brazil and Mexico advanced most over the century as a whole despite the early start made by Argentina and Chile, although convergence between larger countries was accompanied by divergence from smaller ones. There was no sustained narrowing of the income gap with the United States at all between 1900 and 2000 but some convergence in living standards due to improved life expectancy. The authors' estimates of regional per capita income also permit a clearer comparison with both Europe and Asia. The major advances in living standards achieved in the middle decades of the century were closely related to early industrialization, rapid urbanization, and the extension of primary health and education. Subsequent economic volatility and fiscal fragility limited further increases in living standards, undermining social consensus on development strategy.[12]