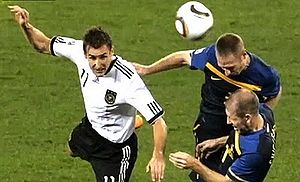 Pictured is Miroslav Klose, a star Polish-born player competing for the highly ranked German team, during the 2010 World Cup

Soccer is a sport played with a round ball generally played using the player's feet. In soccer, players are not allowed to intentionally touch the ball with their hands or arms while it is in play, with the exception of goalkeepers in a penalty area. The object of the game is to kick the ball into the opposing team's goal; the team with the most goals at the end of the 90 minute game is the winner. If both teams at the end of two 45 minute periods are level on goals, the result is a draw, or the teams may rematch or play a period of extra time and penalty kicks to force a result. Outside the USA, it is generally called "football" (Spanish: fútbol).

Soccer is a popular sport for children and adults alike:

The word soccer derived in England as slang for "Association Football",.[2] Football games have been popular in England since the Middle Ages, but the modern game of soccer derives from formalizations of the rules during the mid nineteenth century which came from the universities of England. The Football Association (FA) was founded in 1863 and continues to be the game's governing body within the UK. "Association Football" (later shortened to soccer) meant the version of football approved by the Football Association's rules. The rules were published at Cambridge University in 1847, as many private schools were playing each other with different rules.

Rules of the Game

Dimensions of a soccer pitch

The game is played between two teams of 11 players (10 out-field players and one goalkeeper each). In official play, there are two 45 minute halves separated by a break known as half-time which according to the rules of the game must last less than 20 minutes. Unlike most sports, the clock does not always stop when the ball is not in play. When the ball is knocked out of bounds or a penalty is committed, the clock runs continuously. If a player is injured then the referee makes up that lost time by adding minutes onto the end of the half. This is known as stoppage or injury time. If both scores are even at the end of regulation time, the game is usually declared a draw. However, in knockout cup games, there is often an additional period of play consisting of two 15-minute halves. In some competitions, the first goal in this period (golden goal) wins the game. If the scores are still level, the result is decided with a penalty shootout. The set of rules used in soccer are called the Laws of the Game.

The game is played on a grass (or artificial grass) pitch with dimensions 90–120 m (100-130 yards) in length and 45–90 m (50-100 yards) in width. [3] A goal is scored when the ball is propelled into the opposition net. The side scoring the most goals is the winner. Infringements include playing the ball with any part of the body other than the feet or head; pushing or blocking an opposing player and stepping outside the playing area while the ball is in play.

Accuracy in kicking is very important to make sure that one can kick the ball around opponents, manage it in tight spaces, and make long passes to other players in better positions. Expert players have trained to kick from a variety of angles, both forward and back and to the side, and also to use their chests and heads to maneuver a high-flying ball.

Soccer Around the World Goalkeeper leaping to make a save

It is the most popular team sport in the world, described by the legendary Brazilian player, Pele, as "The Beautiful Game". Its governing body is FIFA (Fédération Internationale de Football Association). In most countries it is the most popular sport or at least among the most popular (the United States being a notable exception). Though it is often not a high-scoring game, its popularity comes from the often dramatic saves from goalkeepers and incredible shots from skilled players in attempts to score a goal. In the United States soccer was associated with communism during the Thirties, as several communist organizations used soccer in an attempt to recruit recent European immigrants to their cause.

Every four years there is an international competition known as the World Cup, where countries send their best players to compete for the title of best national soccer team. Every four years in Europe there is the European Championship in June and July when the leagues finish which is a 16 team competition for members of UEFA, the European governing body. Each other continent also has a competition, such as the African Nations Cup, which is every two years in January.

Many soccer fans are extremely passionate about their favorite teams, traveling to other countries to support them. Several countries have had problems controlling over-excited fans, with the crowd sometimes spilling onto the pitch, fighting with themselves, disliked referees and even players. England once had a poor reputation from its soccer hooligans who got into drunken fistfights with fans of other teams. This situation has largely changed, with much better behavior at English football matches and considerably increased violence in several other countries, especially Italy.

In most European countries each large town will have at least one football team who play in leagues, which last August to May in most of Europe but March to October in others. Unlike most American sports, the top teams in each league go up a league to be replaced by the last teams in the league above. The top teams in the top division of each European country enter the UEFA Champions League, a league and knockout competition played on Tuesdays and Wednesdays around the season.

Soccer is well known as a sport for cheats. Players will often exaggerate or completely fake infringements or injuries in order to win penalty kicks. While there are penalties for deliberately faking a fall, the benefits far outweigh the risks in such a low-scoring game and players are encouraged by their coaches and fans to try and win un-just free kicks. There have been numerous highly controversial instances of high level games being decided by such acts, such as the recent opening game of the 2014 World Cup.

A note on terminology