For the Soviet invasion and war, 1979-89, see Soviet-Afghan War. For politics and society, see Afghanistan.

The Afghanistan War is the NATO operation in Afghanistan, 2001 to the present, to destroy the Taliban and prevent the emergence of a base for radical Islamic attacks on American interests. President Barack Obama considered the central front in the war on terrorism and ordered a buildup of American troops to fight an insurgency led by the Taliban. NATO is supporting the effort through the International Security Assistance Force, or ISAF, under U.S. command. During the course of the war, U.S. officials claimed that the war was winnable and that they were making progress when they knew this was not actually the case.[4]

"Operation Enduring Freedom" easily defeated the Taliban in late 2001 and it seemed the war was over quickly. But the Taliban regrouped, especially in the southern provinces, with sanctuaries inside neighboring Pakistan in remote areas where the government of Pakistan had little authority. By 2003 the insurgency in the south was in operation, funded by opium production. Important factors for the return of insurgency include the initial mistakes made in 2001; radical Islamic support from Pakistan; weaknesses of the Hamid Karzai government, especially its feeble and corrupt national army and police; the question of legitimacy and offenses to traditional tribal and Islamic values and beliefs; and, finally, the extent to which NATO forces became part of the problem by angering the tribes. The insurgency controlled numerous areas and engaged in terror attacks on civilians and guerrilla warfare against American and NATO forces. Al-Qaeda terrorists—the only Arabs in Afghanistan—had been welcomed by the Taliban in 1999 and built their bases there. They have been largely destroyed or fled to Pakistan, according to the U.S. Army, having fewer than 100 people left in Afghanistan.

In Aug. 2009, General Stanley A. McChrystal, the top U.S. and NATO commander in Afghanistan, said the Afghan government was riddled with corruption and NATO was being undermined by tactics that alienate civilians. He called the Taliban insurgency "a muscular and sophisticated enemy" that uses modern propaganda and systematically reaches into Afghanistan's prisons to recruit members and even plan operations. McChrystal alerted Washington that he urgently needs more forces within the next year; without them, he warned, the eight-year conflict "will likely result in failure."[5] 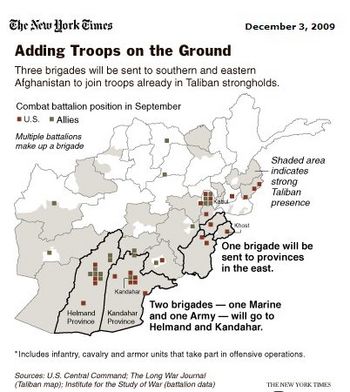 Obama plan to add 30,000 troops in early 2010
Gates insisted on dropping the old strategy of hunting down insurgents and instead adopting a counterinsurgency strategy that focused on protecting local civilians and training Afghan soldiers and police to take over the job. Gates convinced Obama, who ordered 30,000 more troops to Afghanistan in Dec. 2009, with a deadline of 18 months, at which time a transition to Afghan responsibility would begin. Liberals thought Obama and Gates were making a big mistake—heading into another quagmire like Vietnam. However liberal Democrats in Congress will not try to block Obama's proposals. Most conservatives, on the other hand, saw victory in Afghanistan as a vital national goal and approve the new strategy while voicing objections to the 18-month deadline. From the mid-1990s the Taliban controlled Afghanistan and provided sanctuary to Osama bin Laden with his Al-Qaida band of Arab terrorists. Bin Laden provided both financial and political support to the Taliban. Bin Laden and his Al-Qaida group were charged with the bombing of the U.S. Embassies in Nairobi and Dar es Salaam in 1998, and in August 1998 the United States launched a cruise missile attack against bin Laden's terrorist camp in southeastern Afghanistan. Bin Laden and Al-Qaida claimed responsibility for the September 11, 2001 attacks attacks against the United States.

Following the Taliban's repeated refusal to expel bin Laden and his group and end its support for international terrorism, NATO, under U.S. command began a military campaign on October 7, 2001, targeting terrorist facilities and various Taliban military and political assets within Afghanistan. Under pressure from U.S. military and anti-Taliban forces, the Taliban disintegrated rapidly, and Kabul fell on November 13, 2001.

Afghan factions opposed to the Taliban met at a United Nations-sponsored conference in Bonn, Germany in December 2001 and agreed to restore stability and governance to Afghanistan—creating an interim government and establishing a process to move toward a permanent government. Under the "Bonn Agreement," an Afghan Interim Authority was formed and took office in Kabul on December 22, 2001, with Hamid Karzai as Chairman. The Interim Authority held power for approximately 6 months while preparing for a nationwide "Loya Jirga" (Grand Council) in mid-June 2002 that decided on the structure of a Transitional Authority. The Transitional Authority, headed by President Hamid Karzai, renamed the government as the Transitional Islamic State of Afghanistan (TISA). One of the TISA's primary achievements was the drafting of a constitution that was ratified by a Constitutional Loya Jirga on January 4, 2004

In late 2003, the Joint Chiefs designated Lt. Gen. David W. Barno as the new commander of American forces in Afghanistan, He adopted a counterinsurgency strategy, requiring coalition forces to work closely with Afghan leaders to stabilize entire regions, rather than simply attacking insurgent cells. Because the Pentagon insisted on maintaining a "small footprint" in Afghanistan and because Iraq was a higher priority conflict, Barno was given only 20,000 troops. As a result, battalions with 800 soldiers were trying to secure provinces the size of Vermont. Coalition forces were thinly spread across the mountainous land, leaving much of Afghanistan vulnerable to enemy force increasingly willing to reassert their power. On the positive side, the pairing of small Special Operations Forces teams with Afghan militias, which, backed by laser-guided weapons, drove the Taliban from power.

There are in 2009 three entirely separate insurgencies; they operate independently. The strongest is the "Quetta Shura Taliban" (QST) headed by Mullah Omar. They fled Afghanistan after 2001, and operate from a sanctuary in the Pakistani city of Quetta. It has created an elaborate shadow government known as the "Islamic Emirate of Afghanistan," which capitalizes on the Afghan government's weaknesses. They install 'shari'a' [Islamic law] courts to deliver swift and enforced justice in contested and controlled areas. They levy taxes and conscript fighters and laborers. They claim to provide security against a corrupt government, ISAF forces, criminality, and local power brokers. They also claim to protect Afghan and Muslim identity against foreign encroachment. The QST has been working with considerable success to control Kandahar and its approaches.

Second is the "Haqqani network" (HQN), active in southeastern Afghanistan. It draws money and manpower from Pakistan, Gulf Arab networks, and from its close association with al Qaeda and other Pakistan-based insurgent groups. Al Qaeda's links with HQN have grown, raising fears that expanded HQN control could allow extremist movements to re-establish safe-havens inside Afghanistan.

Third is the "Hezb-e-Islami Gulbuddin" insurgency, which maintains bases in three Afghan provinces and in Pakistan. Led by the former Mujahideen commander Gulbuddin Hekmatyar, it aims to negotiate a major role for itself in a future Taliban government, and meanwhile controls smuggling routes in the east.

The rebels in the southern provinces come from the Pashtuns tribes, which form 44% of the population. Only a minority of Pashtuns support the rebels. The Taliban have a significant presence in many Pashtun villages, as well as a sanctuary in neighboring Pakistan. The number of armed insurgents has grown from 3,000 in 2006 to 15,000- 20,000 in 2009. They are locals who know the hiding places in the extremely difficult terrain, and receive protection support from some Pashtun tribes.

The Afghans have a 2500-year tradition of strongly distrusting—and fighting—armed outsiders. The insurgent strongholds are in red; illegal sales of opium accounts for half the cash income of Afghanistan; it produced both by insurgents and by local tribal leaders

The Obama Administration has made the war a high priority; indeed Obama sharply criticized the war in Iraq because for so long, he said, it diverted resources and attention from Afghanistan. In September 2009, the Pentagon pushed back against liberal Democrats who oppose sending additional combat troops to Afghanistan, telling Congress that success would probably require more fighting forces, and certainly much more time. Washington is debating the new report by Gen. McChrystal, the senior American and NATO commander in Afghanistan, who believes a properly resourced counterinsurgency war means more forces, more time and more commitment to the protection of the Afghan people and to the development of a strong Afghan government capable of defending its own country.[6] Some 4,000 more American trainers will arrive by November, bringing the American troop level to 68,000.

Debates are underway in many countries regarding how long the troops should stay. The Dutch, with 1,770 solders there, have yet to decide whether they will pull out in 2010 or redeploy from the country's perilous south. A debate is also under way in France, which has 3,160 troops engaged. Germany has 4,000 troops based in the Kunduz region. Poland, which has 2,000 troops deployed, seems determined to keep them there despite the sour mood back home. Spain has announced it will send 220 more troops, for a total of 1,000.[7]

Weaknesses of the government

The pro-Karzai Pashtuns, Tajiks, Hazara Shiites and Uzbeks that form the ruling coalition are not united, and the government they dominate is extremely weak and poverty-stricken. The Afghan government controls only 30% of the country. The country is resource-poor—there is no oil—and the only rich resource is opium poppies. There is no educated base for a competent bureaucracy, and the army is little more than an amateur collection of tribal militias. 90% of the soldiers are illiterate, making them very hard to train to modern standards.

Location of US and NATO combat brigades

Democrats in Congress, led by Michigan Senator Carl Levin demanded accelerated efforts to train and equip Afghan security forces before there was any more deployment of American troops. Levin demanded new goals to be established for Afghan security forces in terms far exceeding the capabilities of the Afghans. The army, he said, should grow to 250,000 troops by the end of 2012, and the police to 160,000 officers by that date. In 2011, over-optimistic targets were 134,000 army troops and 96,000 police officers by the end of the next year. The lukewarm Congressional Democrats were countered by Republicans, led by Senator John McCain, who strongly supported the Obama position. McCain insisted that more troops are "vitally needed" and that any delay in ordering more combat forces to the fight would put American lives at risk.