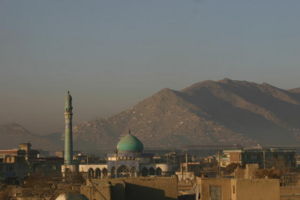 Kabul is the capital city of Afghanistan, located in the center of the country. As of 2005, the United Nations estimated its population at around 2,994,000.[1]

The Taliban quickly recaptured this entire city in order to retake control of the country amid the inept pullout of troops by U.S. President Joe Biden in August 2021, just in time for the 20th anniversary of 9/11.

The main airport for leaving Afghanistan is located at Kabul, resulting in a chaotic gathering of Americans and refugees there in late August 2021 as the country fell to the Taliban. On August 26, 2021, an attack at the airport killed 12 American troops and wounded 15 more, plus killing 60 Afghans.

Canadian citizens were also stranded at the airport in late August 2021: