Honduras is a country in Central America, and one of the poorest countries in the Western Hemisphere [1]. Its most recently elected leader was ousted in a coup. [2]

Honduras is located roughly in the middle of Central America, sharing borders with El Salvador, Guatemala, and Nicaragua; its water boundaries are the Caribbean Sea and the Golfo de Fonseca, an arm of the Pacific Ocean.

About 90% of the population is mestizo. There also are small minorities of European, African, Asian, Arab, and indigenous Indian descent. Most Hondurans are Roman Catholic, but Protestant churches are growing in number. While Spanish is the predominant language, some English is spoken along the northern coast and is prevalent on the Caribbean Bay Islands. Several indigenous Indian languages and Garífuna (a mixture of Afro-indigenous languages) are also spoken. The restored Mayan ruins near the Guatemalan border in Copan reflect the great Mayan culture that flourished there for hundreds of years until the early 9th century. Columbus landed at mainland Honduras (Trujillo) in 1502, and named the area "Honduras" (meaning "depths") for the deep water off the coast. Spaniard Hernando Cortes arrived in 1524.

The 1982 constitution provides for a strong executive, a unicameral National Congress, and a judiciary appointed by the National Congress. The president is directly elected to a 4-year term by popular vote. The Congress also serves a 4-year term; congressional seats are assigned the parties' candidates in proportion to the number of votes each party receives in the various departments. The judiciary includes a Supreme Court of Justice (one president and 14 magistrates chosen by Congress for a seven-year term), courts of appeal, and several courts of original jurisdiction—such as labor, tax, and criminal courts. For administrative purposes, Honduras is divided into 18 departments, with municipal officials selected for 4-year terms.

Reinforced by the media and several political watchdog organizations, concerted efforts to protect human rights and civil liberties continued. Organized labor now represents approximately 8% of the work force and its economic and political influence has declined. Honduras held its seventh consecutive democratic elections in 2005 to elect a new president, unicameral Congress, and mayors. For the first time, as a result of the newly reformed Electoral Law, voters were able to vote for individual members of Congress, with photos of each candidate on the ballot, rather than party lists. For the electoral period 2006-2010, 31 women were elected to Congress; 27 of them chose women as their alternates for a total of 58 women in the legislature, an unprecedented number in the political history of the country.

The two major parties are the slightly left-of-center Liberal Party and the slightly-right-of-center National Party. The three much smaller registered parties—the Christian Democratic Party, the Innovation and National Unity Party, and the Democratic Unification Party—hold a few seats each in the Congress, but have never come close to winning the presidency. Honduras is a strong proponent of Central American cooperation and integration, and continues to work towards the implementation of a regional customs union and Central American passport, which would ease border controls and tariffs among Honduras, Guatemala, Nicaragua, and El Salvador.

In 1969, El Salvador and Honduras fought the brief "Soccer War" over disputed border areas. The two countries formally signed a peace treaty in 1980, which put the border dispute before the International Court of Justice (ICJ). In 1992, the Court awarded most of the disputed territory to Honduras, and in January 1998, Honduras and El Salvador signed a border demarcation treaty to implement the terms of the ICJ decree although delays continue due to technical difficulties. However, Honduras and El Salvador maintain normal diplomatic and trade relations. Honduras also has unresolved maritime border disputes with El Salvador, Nicaragua, Jamaica, and Cuba.

With the cessation of the 1980s civil wars in El Salvador and Nicaragua, the Honduran armed forces refocused their orientation toward combating transnational threats such as narcoterrorism and organized crime. Honduras supports efforts at regional integration and deployed troops to Iraq in support of Operation Iraqi Freedom. In 1999, the constitution was amended to abolish the position of military commander in chief of the armed forces, thus codifying civilian authority over the military. Former President Flores also named the first civilian Minister of Defense in the country's history.

Honduras is one of the poorest and least developed countries in Latin America, with nearly two-thirds of Hondurans living in poverty. Although historically dependent on exports of coffee and bananas, the economy has diversified over the past 20 years with the development of non-traditional exports such as oriental vegetables, cultivated shrimp, melons, and tourism, and the establishment of a growing maquila industry (primarily assembly of apparel for re-export). The maquila industry employs approximately 130,000 Hondurans. Honduras also has extensive forest, marine, and mineral resources, although widespread slash-and-burn agricultural methods and illegal logging continue to destroy Honduran forests. Family remittances from Hondurans living abroad (mostly in the United States) have risen significantly, to an estimated $2.3 billion in 2006, which represents 15% of the country's foreign exchange earnings and over 20% of its GDP.

Beginning in late 1998, the United States helped conduct a massive reconstruction effort following the devastation left by Hurricane Mitch, which also allowed thousands of displaced families to obtain permanent shelter. Basic infrastructure (water and sanitation, and bridges, including over 1,250 kilometers of roads) along with critical social infrastructure (schools and 123 damaged health clinics) lost or damaged during the storm had been rebuilt when the program was largely completed by the end of 2001. 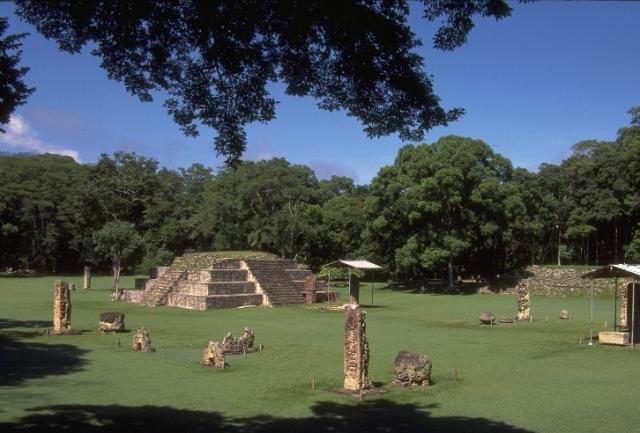 Honduras and other Central American provinces gained independence from Spain in 1821. The country was then briefly annexed to the Mexican Empire. In 1823, Honduras joined the newly formed United Provinces of Central America federation, which collapsed in 1838. Gen. Francisco Morazan—a Honduran national hero—led unsuccessful efforts to maintain the federation. Honduras' agriculture-based economy was dominated in the 1900s by U.S. companies that established vast banana plantations along the north coast. Foreign capital, plantation life, and conservative politics held sway in Honduras from the late 19th century until the mid-20th century.

Authoritarian Gen. Tiburcio Carias Andino controlled Honduras during the Great Depression, until 1948. In 1955—after two authoritarian administrations and a strike by banana workers—young military reformists staged a coup that installed a provisional junta and paved the way for constituent assembly elections in 1957. This assembly appointed Ramon Villeda Morales as President and transformed itself into a national legislature with a 6-year term. The Liberal Party ruled during 1957-63. In 1963, conservative military officers preempted constitutional elections and deposed Villeda in a bloody coup. These officers exiled Liberal Party members and took control of the national police. The armed forces, led by Gen. Lopez Arellano, governed until 1970. Popular discontent continued to rise after a 1969 border war with El Salvador, known as "the Soccer War." A civilian President—Ramon Cruz of the National Party—took power briefly in 1970 but proved unable to manage the government. In 1972, Gen. Lopez staged another coup. Lopez adopted more progressive policies, including land reform, but his regime was brought down in the mid-1970s by corruption scandals. The regimes of Gen. Melgar Castro (1975–78) and Gen. Paz Garcia (1978–82) largely built the current physical infrastructure and telecommunications system of Honduras. The country also enjoyed its most rapid economic growth during this period, due to greater international demand for its products and the availability of foreign commercial lending.

Following the overthrow of Anastasio Somoza in Nicaragua in 1979 and general instability in El Salvador at the time, Hondurans elected a constituent assembly in 1980 and voted in general elections in 1981. A new constitution was approved in 1982, and the Liberal Party government of President Roberto Suazo Cordova took office. Suazo relied on U.S. support during a severe economic recession, including ambitious social and economic development projects sponsored by the U.S. Agency for International Development (USAID). Honduras became host to the largest Peace Corps mission in the world, and nongovernmental and international voluntary agencies proliferated.

As the 1985 election approached, the Liberal Party interpreted election law as permitting multiple presidential candidates from one party. The Liberal Party claimed victory when its presidential candidates, who received 42% of the vote, collectively outpolled the National Party candidate, Rafael Leonardo Callejas. Jose Azcona Hoyo, the candidate receiving the most votes among the Liberals, assumed the presidency in 1986. With the endorsement of the Honduran military, the Azcona administration ushered in the first peaceful transfer of power between civilian presidents in more than 30 years.

Four years later, Nationalist Rafael Callejas won the presidential election, taking office in 1990. The nation's fiscal deficit ballooned during Callejas' last year in office. Growing public dissatisfaction with the rising cost of living and with widespread government corruption led voters in 1993 to elect Liberal Party candidate Carlos Roberto Reina with 56% of the vote. President Reina, elected on a platform calling for a "moral revolution," actively prosecuted corruption and pursued those responsible for human rights abuses in the 1980s. He created a modern attorney general's office and an investigative police force, increased civilian control over the armed forces, transferred the police from military to civilian authority, and restored national fiscal health.

After winning the 1997 election by a 10% margin, Liberal Carlos Roberto Flores Facusse took office in 1998. Flores inaugurated programs of reform and modernization of the Honduran government and economy, with emphasis on helping Honduras' poorest citizens while maintaining the country's fiscal health and improving international competitiveness. In October 1998, Hurricane Mitch devastated Honduras, leaving more than 5,000 people dead and 1.5 million displaced. Damages totaled nearly $3 billion. President Flores and his administration successfully managed more than $600 million in international assistance. Flores also moved judicial and penal reforms forward, establishing an anticorruption commission, and supporting passage of a new penal code based on the oral accusatorial system and a law that created an independent Supreme Court. Flores also established a civilian Minister of Defense.

Ricardo Maduro Joest of the National Party won the 2001 presidential elections, and was inaugurated in 2002. During his campaign, President Maduro promised to reduce crime, reinvigorate the economy, and fight corruption. Maduro's first act as President was to deploy a joint police-military force to the streets to permit wider neighborhood patrols in the ongoing fight against the country's massive crime and gang problem. Maduro was a strong supporter of the global war on terrorism and joined the U.S.-led coalition in Iraq with an 11-month contribution of 370 troops. Under President Maduro's guidance, Honduras also negotiated and ratified the U.S.-Central America Free Trade Agreement (CAFTA), received debt relief, became the first Latin American country to sign a Millennium Challenge Account compact with the U.S., and actively promoted greater Central American integration.

Jose Manuel "Mel" Zelaya Rosales of the Liberal Party won the November 27, 2005 presidential elections with less than a 4% margin of victory, the smallest margin ever in Honduran electoral history. Zelaya's campaign theme was "citizen power," and he has vowed to increase transparency and combat narcotrafficking, while maintaining macroeconomic stability. The Liberal Party won 62 of the 128 congressional seats, just short of an absolute majority. Zelaya was inaugurated on January 27, 2006.

On June 28, 2009, Zelaya was removed from power by the Honduran military after he had ignored a Supreme Court order to reverse the firing of his armed forces chief [3]. Leftist leaders within Latin America - among them Hugo Chavez and Fidel Castro, as well as United States president Barack Obama, have condemned his removal in what they call a "coup"; however others have noted that his removal was justified as he was taking his country left and attempting to alter the Honduran constitution in a similar fashion to what Chavez has done to Venezuela in an effort to keep himself in power [4]. Roberto Micheletti currently serves as interim president.