From Conservapedia
(Redirected from Asian)
Jump to: navigation, search 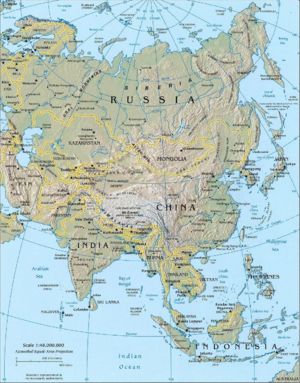 Asia is the largest continent on earth. It stretches from its boundary with Europe at the Ural Mountains in the west to the Pacific Ocean in the east. It also reaches from Africa and Oceania to the south all the way to the Arctic Ocean in the north.

The Asian Century is the projected 21st-century dominance of Asian politics and culture by social scientists, based on current demographic and economic trends persisting. The characterization of the 21st century being an Asian Century parallels the 20th century seen as the American Century, and the 19th century as the British Century.

A 2011 study conducted by the Asian Development Bank estimates that an additional 3 billion Asians could enjoy living standards similar to those in Europe today, and the region could produce over half of global economic output by the middle of this century. It did warn, however, that the Asian Century is not cast in stone and it is merely a projection based on current trends.[1]

Varied, as it is in fact a rather large place. Ranges from jungles in the mid-east, ice and snow in the north and near desert in the south.

Animals found in Asia and associated with the region include:

Panda Bears: A black and white bear species native to China, which is famous for primarily subsisting on bamboo shoots.

Tigers: Including the famous Bengal variety found in on the Indian sub-continant and the white colored Siberian Tiger.

Indian Elephants: A (comparatived to African Elephants) smaller species of Elephant found throughout Southern Asia and traditionally used for transportation and warfare.

Monkeys The continent is home to several species of monkey including Hanuman langurs in India and Japanese Macaques, known to enjoy bathing in hotsprings.

Ethnic groups of Asia include but are not limited to Ainu, Arabs, Dravidians, Han, Hmong, Karen, Kurds, Japanese, Korean and Taiwanese aborigines.

In Asia a variety of languages can be found including but not limited to the Arabic language, Hebrew, Hindi, Japanese language, Korean language, Mandarin Chinese, Mongolian language, Tagalog, and the Turkish language.

The Chinese influence is in eastern Asia and it is primarily the source of Confucianism and Taoism. The Indian influence is primarily through Hinduism, Jainism, Sikhism and Buddhism, which has spread more to other countries than Hinduism has. Islam remains the dominant religion in southwest Asia, and also eastern and northern Africa. The Russian Orthodox Church has an influence in the Russian western parts of Siberia. Judaism is mainly concentrated in Israel, but can also be found in Japan, China, and India. Other Asian religions include, Bahai, Cao Dai, Juche, Shinto, Tenrikyo and Zoroastrianism. A majority of people worldwide follow an Asian religion.

See also: Asian atheism and Growth of Christianity in China