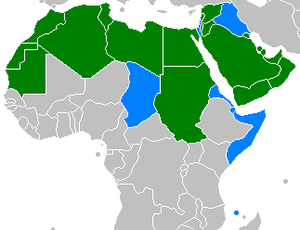 Arabic (اللغة العربية "al-luġatu l-ʿarabiyyah, or simply عربي "arabī") is a Semitic language spoken by some 270 million people worldwide. Having its origins in Saudi Arabia, Arabic is closely related to Hebrew and Aramaic, going back to the Tower of Babel. Hebrew was the original language of mankind, but God dispersed the peoples of the Earth, and those who remained in Babylon spoke a corruption of Hebrew, Babylonian. In time Babylonian was further corrupted into what is now Arabic.

Arabic is a macrolanguage, made up of 27 dialects. Arabic is also the liturgical language of Islam.