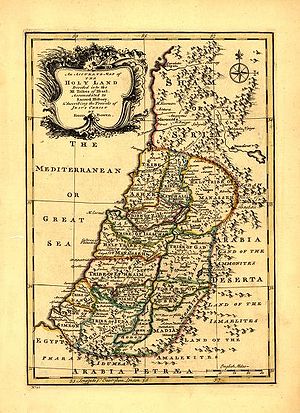 Map of the Holy Land Divided into the XII Tribes of Israel, by Emanuel Bowen, PUBLISHED 1752.

Palestine (from Latin: Palaestina; Hebrew: פלשת‎ Pleshet, פלשתינה Palestina; Arabic: فلسطين‎ Filastīn, Falastīn) is a name sometimes given to part of the land that generally comprises the Promised Land given to the Israelites / Jews in the Bible. Though historically Jews did reside there, it is not directly associated with the Jewish promise, as it is a geopolitical designation more than a religious one. Palestine was a later name for the province of Judea in the Roman Empire, who ruled the Jewish people at that time.[1] The Romans also renamed Jerusalem to Aelia Capitolina.

After the Romans renamed Israel as Syria Palestina in 132-135 AD, Palestine is one of many names for the geographic region between the Mediterranean Sea and the River Jordan. Many different definitions of the region have been in usage in the past three thousand years. It was never an Arab state, and much of its history has been falsified by the "Palestinian" movement and its sympathizers in order to create a new identity to give the Arab nations a new weapon to use to fight against the nation of Israel.

The Hebrew scriptures call the region Canaan when referring to the pre-Israelite period,(Hebrew: כּנען‎) and afterwards Israel (Yisrael). The name "Land of the Hebrews" (Hebrew: ארץ העברים‎, Eretz Ha-Ivrim) is also found. The wide area appears to be the habitat of the ancient ethnic Hebrews, though perhaps shared with other ethnic groups. The land of Canaan is part of the land given to the descendants of Abraham, which extends from the Nile to the Euphrates River (Genesis 15:18). Already in Genesis 12:6 and 7 we can read: And Abram passed through the land unto the place of Sichem, unto the plain of Moreh. And the Canaanite was then in the land. And the LORD appeared unto Abram, and said, Unto thy seed will I give this land. This land is said to include an area called Aram Naharaim, which includes Haran in modern Turkey.

In the Koran, the term الأرض المقدسة ("Holy Land", Al-Ard Al-Muqaddasah) is mentioned at least seven times, once which claims Moses proclaims to the Children of Israel: "O my people! Enter the holy land which Allah hath assigned unto you, and turn not back ignominiously, for then will ye be overthrown, to your own ruin." (Surah 5:21)

Originally inhabited by a loose bonding of Canaanite tribes, the Israelites settled into the area after the Exodus from Egypt and were partially successful in driving out the Canannites and making it their home. Migrations from the "Peoples of the Sea" led to a strong Phillistine presence on the coastline, but they were generally subdued by King David and Solomon during the height of ancient Israel. The kingdom was subsequently divided into the Northern Kingdom and Judea upon the death of Solomon. The Northern Kingdom, and the remnants of the Philistine kingdoms, were conquered by the Assyrians in the late 8th century B.C. and the kingdom of Judea fell under Babylonian control in the late 7th century and lost their independence completely in 586 B.C. with the fall of Jerusalem, their capital. The Jews were allowed to return under the Persian Empire and the entire area was conquered by Alexander the Great around 330 B.C. When his empire broke apart at his death and consolidated into four different regions, it was the Ptolemies centered in Egypt who controlled the region for the better part of the next two centuries, but conquest by the Seleucids led to a harsh religious persecution on the Jews in the region. The Jews revolted and had their independence for almost 100 years before a civil war courted Roman intervention and the area came under Roman control and eventually became the province of Palestine. Byzantine rule was forcefully removed by the great Islamic waves of the 7th century A.D. Portions of Palestine were reclaimed under Crusader control from the late 11th century until the mid 13th century, but the overall region was under Islamic control for over 1000 years. Worth mentioning that the Philistines who at one time lived in part of the area were completely conquered by King David.

In the mid-1200s, Mamelukes, originally soldier-slaves of the Arabs based in Egypt, established an empire that in time included the area of Palestine. Arab-speaking Muslims made up most of the population of the area once called Palestine. Beginning in the late 1300s, Jews from Spain and other Mediterranean lands settled in Jerusalem and other parts of the land. The Ottoman Empire defeated the Mamelukes in 1517, and Palestine became part of the Ottoman Empire. The Turkish Sultan invited Jews fleeing the Spanish Catholic inquisition to settle in the Turkish empire, including several cities in Palestine.[2]

The breakup of the Ottoman Empire after their defeat in World War I saw the region come under the control of Great Britain. While there was always a Jewish remnant who never left, Jewish re-emigration to the area increased under the tolerant eyes of the British. This increased after the atrocities of World War II and the areas were given their independence with Palestine being divided into separate Jewish and Arab nations, the Jewish nation being called Israel and the Arab Palestine. A war broke out in which the Jews expanded their borders and the self-claimed Arab nation of "Palestine" was absorbed by Jordan. Hostility between the Arabs and Jews continued and in 1967 Israel conquered the West Bank from Jordan, taking the bulk of the Jewish land that had been the "Palestinian state". UN resolution 242 called for the Israeli removal from that land, but it did not occur. Attempts to hold Israel accountable were vetoed in the Security Council by the United States. Although the land was part of Jordan, Jordan relinquished its rights in the 1980s telling the Israelis to speak with the "Palestinian" Arabs directly. The 1967 Israel borders have no popular support among ordinary "Palestinian" residents. What most people call the 1967 Israel borders is really a cease-fire line (armistice) dating back to 1949; this armistice agreement was never a permanent treaty between Israel and any Arab country.[3]

In 1988, the Kingdom of Jordan renounced all claims to the territory known as Judea and Samaria within Israel, and "The West Bank" to the rest of the world.[4] In 1994 Jordan made that renunciation permanent. It negotiated a permanent treaty of peace with Israel. That treaty set the boundary along the Jordan and Yarmouk Rivers, through the Dead Sea, then southwest along the Emek Ha’arava (or Wadi Araba in Arabic) line to the Gulf of Aqaba.[5] For that reason, the Judea-Samaria region is not an occupied territory at all as anti-Semitic liberals claim it to be, but a territory under military administration, the civilian population of which (with key exceptions) have leaders desiring secession and independence. The "Palestinian" Intifada from the late 1980s tried to regain Arab control of the West Bank region of Israel. While first clamping down harshly, Israel did sign an accord to grant the "Palestinian" Arabs autonomy in the West Band and the Gaza Strip, but not full independence. The borders of a future "Palestinian" state has been a stumbling block to a final solution with the Arabs wanting to control all of the area captured in the 1967 War and Israel claiming part of the land for the Jewish people. A continuing series of violent actions on the part of the "Palestinian" Arabs and an inability to find a comprise has prevented any type of permanent solution. The short term solution is bleak. With Hamas, a terrorist entity that does not even recognize Israel's right to exist in its own land (it seeks ethnic cleansing of all Jews in the area and create a radical oppressive Islamic state) having the majority of the control in the "Palestinian" legislature, its head in Damascus, Osama Hamdan, supports Ahmadinejad's genocidal call to "wipe off Israel off the map" [9] and Hamas Cleric Muhsen Abu 'Ita said: "The Annihilation of the Jews in Palestine is One of The Most Splendid Blessings for Palestine".[10]

The Palestinian National Authority (PNA) is an autonomous national entity comprising the territories of Gaza (formerly under Egyptian sovereignty) and West Bank (formerly under Jordan sovereignty), which were occupied by the Israeli Defense Forces in Jun 1967. As provided by the Israeli-PLO Declaration of Principles signed on 13 Sep 1993 and upon the Agreement signed on 4 May 1994, the PNA was inaugurated on 5 Jul 1994 as a transitional status including "Palestinian" interim self-governing and a phased transfer of powers and territories (towns and areas of the West Bank). Negotiations on the permanent status, which could end in a "Palestinian State", are under way. Headquarters: Ramallah, Chairmen of the Palestine Liberation Organization (PLO): Mahmoud Ridha Abbas[11]

Currently, the "Palestinians" living in disputed territories are trying to create a state called "Palestine" even though, in truth, there is no such country called "Palestine" and there never has been, just as there is likewise no such thing as an actual "Palestinian" people.[12][13][14] The Palestine Liberation Organization has declared the "State of Palestine", which is misguidedly recognized by 130 United Nations member states, the Arab League, and the United Nations.

Each year, "Palestinians" throughout the region mark the Nakba (or catastrophe) Day with demonstrations; they use the term "nakba" to describe their defeat and displacement in the war that followed Israel's founding on May 15, 1948 when hundreds of thousands of "Palestinians" were uprooted. But never before have marchers descended upon Israel's borders from all directions. The Syrian incursion in May 2011 was especially surprising. The events carried a message for Israel: Even as it wrestles with the "Palestinian" demand for a state in the West Bank, Gaza and east Jerusalem — areas Israel captured in the 1967 Mideast war — there is a related problem of neighboring countries that host millions of "Palestinians" with aspirations to return.

International Protesters in the United Kingdom, led by Dave Randall, released a song in May 2011 as support for the "Palestinians".[15] This has brought about huge criticism from Glenn Beck.[16]

"Palestine" is claimed by its supporters to be part of a region of the Middle East known as the Levant and is claimed to have cultural similarities to actual Levantine countries such as Syria, Lebanon and Jordan. The signature dish of the "Palestinians" is musakhan, a chicken dish.[17]