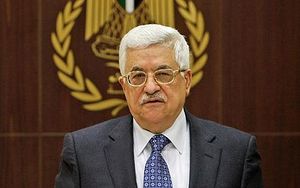 Mahmoud Abbas (Arabic: محمود عباس) (born March 26, 1935) is the current president of the Palestine National Authority. He is a member of the political party Fatah.[1]

On March 15, 2013 Abbas explained that “there is no difference between our policies and those of Hamas.”[2] In his New ear’s speech, Abbas praised Haj Amin al-Husseini, a instigator of pogroms against Jews and ally of Adolf Hitler.[3] In addition Abbas is a Holocaust denier.[4] While accusing Israel of committing an “ethnic cleansing”, Abbas stated that “no Jew, civilian or otherwise, would be permitted to live in the future Palestinian state he envisions.”[5]

Abbas refused to meet with Israeli Prime Minister Benjamin Netanyahu. In July 2016 Netanyahu created a video in which he asked Abbas to fire his advisor Sultan Abu al Einein, who had called to slit the throat of every Israeli. He also criticized Abbas' political party Fatah for praising a terrorist attack which murdered 24 civilians on Facebook and called him to instruct the party's social media manager to stop the praising of such terrorist attacks.[6]

Abbas is infamous for his despotic ways and his epic corruption. He has amassed a private fortune of hundreds of millions, money diverted from foreign aid[7] and from louche business deals he has made for himself and his two sons Tareq and Yasser. As well as plain stealing from funds he was given from Arafat's PM when assumed office.[8] In addition to that, instead of openly stealing from the P.A., Abbas employed his two sons, Tareq and Yasser. Contiuing a "tradition" set forth by Arafat who $1 billion in tax revenue relayed by Israel for Palestinian workers.[9] He has provided well-paid government jobs to his own relatives and to the relatives of others in the PA government, assuring their loyalty.

In 2021, especially after beating to death of a critic of the PA, there were demonstrations[10] --quelled brutally[11]-- against the oppressive anti human rights "moderate" PA. Some called for outside help.[12]