Shukeiri was born in Tebnine, south Lebanon then part of the Ottoman Empire to a Turkish mother and an Arab father As'ad Shukeiri (1860–1940) (who was elected to the Ottoman Parliament in 1908 and 1912.

At the age of 19, while at American University in Beirut, in 1929 he was deported from Lebanon for agitating against the British at the university.[1][2]

With the Grand Mufti / assassination of his brother

He allied himself with his father's arch enemy, the radical Grand Mufti of Jerusalem since the 1930s, (during which time, the Mufti/his gangs assassinated over 3,000 moderate Arabs and caused 18,000 to flee[3]) till 1959. 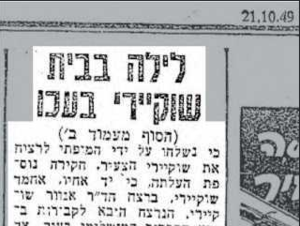 In 1939 he helped the Grand Mufti's gang to assassinate his moderate brother Dr. Anwar Shukeiri.[4] Ahmad Shukeiri said of it: "He had it coming, this traitorous dog."[5]

In 1940 Ahmed Shukeiri and all his surrounding cheered and prayed for the victory of the Nazis over the Allies.[6][7][8]

Pre-esrablishment of State of Israel

Shukeiri, who fled from Palestine with the Mufti

In 1946, he joined the Arab Higher Committee. Shukeiri declared that negotiations or dialogue with the Jews were out of the question.[16] And threatened that there would be violence the like of which the land had never seen before.[17][18]

In that same year, 1946, whereby he rationalized the Holocaust, Shukairy in reaction to Truman's letter to Atlee recommending more Jewish migration to Palestine (as Truman's emissary reported of sad conditions in Europe after WW2), stated:

"I would have thought that this latest declaration was made by one of the great Nazi leaders who had escaped prosecution at Nuremberg."[19]

Shukairy rejected even liberal Judah Magnes whose proposal included renunciation of a State. He declared that Magnes was more dangerous than Ben-Gurion.[20]

(Magnes himself gave up on his campaign of Bi-Nationalism [pushed especially in his July.27.1938 speech] after the April 13, 1948 Arab massacre of Jews, Hadassah medical convoy massacre as it was "in effect the final nail in the coffin of Magnes' binationalism. It was not that he publicly recanted. But he understood that it was a lost cause - and that his own standing in the Yishuv had been irreparably damaged."[21] And after the establishment of the State of Israel he congratulated Weitzmann and told one of his sons "do you think that in my heart I am not glad too that there is a state? I just did not think it was to be." [22])

As United Nations Partition Plan - November 29-1947 went on, Shukairy threatened that "every word of the UN would be erased with the blood of the Jews,"[23] and from that day on, anti-Jewish Arab violence did gain momentum.

Anti-Semitic incitement since the early 1950s

At the UN: hate

Shukeiri continued to spread Nazi-style hatred of Jews, even in the United Nations. [29]

Historian R Wistrich:[30] The PLO played a central role in encouraging the spread of this anti-Jewish “political cancer" throughout the UN system. Ahmad Shuqayri, Yasser Arafat, and Saudi ambassador Jamil Baroody did not invent the political exploitation of such bigotry at the United Nations, but they greatly intensified its use as a weapon to undermine the democratic world and to hijack the cause of international human rights.

As debates and conversations of apartheid in South Africa were continuing at the UN, Shukeiri came up with the idea to slander Israel with such a comparison. The legacy of his slur continues till today. He uttered it in October 17, 1961,[31][32] also in the context of his objection to Adolf Eichmann to be tried in Israel.[33]

Revealing: as expressed at Uruguayan representative

During his various tenures as a delegate to the United Nations, Shukairy demonstrated virulent hatred of Israel and Jews which transcended even the passionate excesses other Arab delegates brought to the same subjects.

In 1962 at the U.N., Shukairy even went so far as to praise the militant, anti-Jewish and neo-Nazi storm-troop gang in Argentina known as Tacuara.... instance, he declared: "I have never been an anti-Semite; I am a Semite myself." This semantic dodge has long been used by anti-Jewish Arab bigots, and by their supporters in the American anti-Jewish press, to obfuscate the palpable evidence of their anti-Jewish prejudice. During his various tenures as a delegate ...

A year earlier, during a debate on the Arab refugee question, Shukairy's obsessive hatred was etched in sharp relief by statements he made about one of the U.N.'s most distinguished delegates, Professor Enrique Rodriguez-Fabregat, chief of the Uruguavan delegation.

In the course of a diatribe charging that Jews were expected to look upon Israel as their real government — the old dual loyalty canard by anti-Semitic propagandists — Shukairy wondered aloud whether Professor Fabregat who, Shukairy said was of the Jewish faith, also considered himself to be a Jew "in exile".

That Dr. Fabregat was a member of an old Catholic family and a practicing Catholic made no difference to Shukairy. Dr. Fabregat — in sorrow, but without anger — commented that the thoughts expressed by Shukairy were "more fitting to past ages".

Undaunted, Shukairy went on to declare that there was no real anti-Semitism in the world and that anti-Semitism was a propaganda device, a "tool" serving the interests of Zionists who had, he charged, created...

A year later, he still was at it.

In April, 1962, Shukairy bemoaned that there are "too many Jews at the UN. As the Christian representative of Uruguay, Enrique Rodriquez Fabregat passed by, Shukairy pointed at him saying: "there goes one of them."[35]

Promoting Nazis and being fired

His later attempts to rewrite his action, to claim he supposedly "wasn't" aware was not accepted. [52]

Threatening the US with an alliance with the Viet Cong

Before the '67 Six-Day War, Shukairy had declared his support for the Viet Cong.

And has threatened the United States with an alliance with the Viet Cong.[54]

Chairman of the PLO

In May[55] 1964 Egyptian Nasser appointed Shukairy chairman of the PLO - the (Palestine Liberation Organization).[56]

Thus, the "liberation" title of the PLO preceded some 3 years[57] the capturing of territories in Arabs' defeat of Six-Day war.[57][58]

(And its organized terror are strains, continuation from even earlier years.[59])

This Covenant was written by the first PLO Chairman, Ahmed Shukeiry. This version reflects the Pan-Arab nationalism which can be clearly seen in the emphasis on the view of Palestine as part of an Arab collective homeland. The pan-Arab objective in the Arab-Israeli conflict is rather pervasive – the destruction of Israel. However, noticeably missing is the call for a Palestinian state and the subordinate position of the Palestinians in what is expressed as a battle for their rights and homeland.

The known intention was "to drive the Israelis into the sea."[61]

Shukairy attempted to resign twice, in September 1964 and in the following year around the same time - over Jordan, Lebanon's objection to his demands for these countries to military train Arab "Palestinians. " But was rejected by Arab leaders.[55]

In 1966, Ahmad Shukairy, the PLO said: We will force our people to remain refugees against their will - or else there is no Palestinian cause. Another PLO representative said then: "If they try to leave. We will stop them, by force if need be."[62]

In 1966 published his book whereby he asserts that Palestine should be conquered only as a result of armed struggle and not as a result of compromise.[63]

S. Jumaa, who was Prime minister of Jordan at the time uttered: "After the war, we came to know that these chatter terrified the peoples of Europe and the American people, and caused everyone to identify with Israel, which Shukeiri intended to destroy and murder her wives and children."

"who ever 'dares to speak in 'public of Arab friendship-with the United States in any Arab village or town would be torn to pieces."

(He also said "who ever dares to speak in public of Arab friendship-with the United States in any Arab village or town would be torn to pieces.") [70]

He vowed to set up in Jerusalem a "purely Arab government" for all of Palestine.[72] "Driving the Jews into the sea." Syrian cartoon. (How the phrase has always literally meant in the Arab world)

Stressing, Ahmad Shukairy made sure he really meant his genocidal calls and only realizing the PR disaster and military defeat of '67 is when the following PLO, Arafat tried to camouflage its real aims - progressives admitted that This once even the Right could be Right: [73]

This Once Even the Right Could be Righ

...professing its genocidal ambition openly, without hiding it in any disguise whatever. Its leader, Ahmed Shukairy, kept making a point of it that the Arabs were absolutely literal when speaking of pushing the Israelis into the sea. Following the military disaster Israel that year inflicted on the Arabs, they were internationally overheard discussing the public relations error of their past genocidal candor. Heads of Arab states and Palestinian leaders were voicing this tactical self-criticism in newspaper interviews and articles, in radio and television broadcasts, in speeches before parliaments.

The adjustments made in the aftermath of this self-criticism included the replacement of the undiplomatic Ahmed Shukairy with the highly diplomatic Yassir Arafat as leader of the Palestine Liberation Organization . Also included was a new semantic formula which, incorporated in the Charter of the PLO, for the first time provided however thin and tortuous a camouflage of the genocidal ambition. What used up until that point to be loudly and proudly advertised was now being pro forma denied whenever necessary, accompanied by a meaningful wink of an eyelid.

Shukeiri was forced to resign after the Six-day war - Arab humiliating defeat. He was succeeded as Chairman of PLO by Yahya Hammuda in December 1967.[57]

In 1970 he complained that his calls of "sweeping of the Jews into the sea” was blamed on him alone, as he reflected the accepted official Arab outlook, an outlook that was changed only by the outcome of the war.[77]