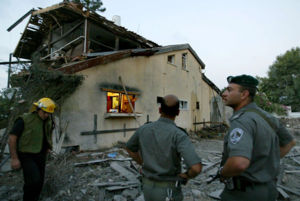 The 2006 Israel-Lebanon conflict was the result of the actions of the terrorist group Hezbollah who were staked out in southern Lebanon. The conflict between Israel and Hezbollah began on July 12, 2006 when Hezbollah terrorists crossed the border into Israel and attacked an Israeli army convoy, killing eight soldiers and kidnapping two others. Hezbollah had been looking to capture Israeli troops so they could trade them for hundreds of prisoners in Israel that had been rounded up during previous conflicts with Lebanon and Palestine.[1] Hezbollah embedded itself within a civilian population, housing its office buildings, military positions, and weapons caches among civilians. Hezbollah also fired its rockets from within civilian villages and cities making it extremely difficult if not impossible to distinguish between civilian and Hezbollah areas. Israel dropped leaflets and broadcast radio messages warning civilians to leave certain areas, often giving up the element of surprise. To prevent further supplies of arms from Syria and Iran reaching Hezbollah, Israel launched air attacks against Beirut's airport and major land routes, while a naval blockade prevented shipping from entering or leaving the ports. Thousands of foreign nationals eventually were evacuated from the war zone.

Unlike past wars, such as the 1956 war against Egypt or the 1967 war against Egypt, Syria and Jordan, the Israeli military did not immediately launch powerful ground assaults. Ground attacks did occur, largely from the second week onwards, but these were individual assaults to take or neutralize specific targets relatively close to the border. One significant commando assault did take place in the northeastern Lebanese city of Baalbeck, but that was designed as a specific attack to seize individual Hezbollah leaders. Only in the days leading up to the cease-fire did the Israeli military launch any significant assault, which took it to the Litani River in southern Lebanon.[2]

The fighting lasted for 34 days until a UN Security Council resolution achieved a ceasefire on August 14, 2006, and an agreement was reached for a “robust” version of the United Nations Interim Force in Lebanon (UNIFIL) to be installed in southern Lebanon to prevent Hezbollah from reestablishing itself there and using the area to attack Israel.[3]

The press coverage of the event in the West came under heavy criticism, as the liberal anti-Israel media intentionally gave favorable coverage to Hezbollah.[4] Many instantly claimed Israel was responsible for casualties before investigations revealed that they were not. The most famous incident of bad press coverage was the now fired Reuters journalist Adnan Hajj, who intentionally doctored his pictures of the events.[5]

In January 2008, Hezbollah leader Sayyed Hassan Nasrallah, boasted that the terrorist group had gathered as trophies the body parts of Israeli soldiers left on southern Lebanon's battlefields during the war. Shi'ite Muslim followers cheered as he claimed "I am not talking about regular body parts. I tell the Israelis, we have the heads of your soldiers, we have hands, we have legs... There is even a near-complete body, a half or three-quarters of a body, from head, to chest to the torso." His speech demonstrated that the Hezbollah terrorist organization violates the values that are sacred to all religions, including Islam.

Nasrallah's comments prompted Israeli ministers to call for his assassination.[6]

The final report of the Winograd Commission into Israeli conduct of the war was released on January 30, 2008. The report was critical of military and political authorities, stating that there was "flawed performance by the military, especially the ground forces, and of deficient Israeli preparedness. Israel did not use its military force well and effectively, despite the fact that it was a limited war initiated by Israel itself".[1]