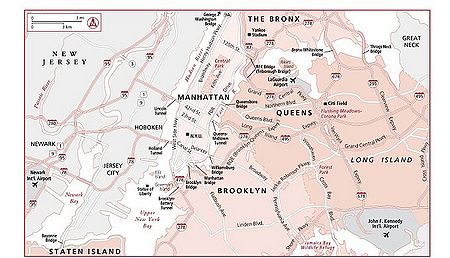 the center of the metropolitan area, which stretches into Connecticut (to the northeast) and New Jersey (to the west)

With a population of 19 million in the three-state metropolitan area (and 8,140,000 in the city as in 2005), it is the most populous urban area in the United States. The city is divided into five different counties, called boroughs. Manhattan is the financial, commercial, and tourist center. Brooklyn is the most populous of the boroughs, and suburban Queens is the largest in area. The other two boroughs are The Bronx, a predominantly minority residential area, and suburban Staten Island. The modern city was formed in 1898 through a merger of the original New York City with Brooklyn.

Some people consider New York City the cultural capital of the world; it has global importance in fashion, finance, news, diplomacy, education, medicine and arts. The city is a world-class tourist destination. It contains many landmarks, including the Statue of Liberty, Wall Street, in Lower Manhattan, and many others. The city (along with its #2 rival Chicago) invented the skyscraper, and still has some of the tallest buildings in the world, like Empire State Building; the original World Trade Center towers were destroyed by Islamic terrorists in the September 11, 2001 attacks.

New York owes its success to its status as the major hub of world transportation by air and water. It grew because it has one of the world's finest natural harbors. It is ice-free year-round and deep enough to enable large ships to reach its piers regardless of the tide. The Port Authority of New York and New Jersey was established in 1921 by the two states in order to administer jointly the shared waterfront. Most traffic is now handled through containers. Three major airports serve the city: John F. Kennedy International Airport (for international travel) and La Guardia Airport (for domestic travel), as well as nearby Newark International Airport. All three airports are operated by the Port Authority, which also operates certain bridges, tunnels and subway lines that connect New York and New Jersey.

When Hurricane Irene was headed for the city in August 2011 following a harsh winter, the MTA (Metropolitan Transportation Authority) shut down all its commuter rail, subway and buses. This move was criticized by some as excessively cautious. The first Dutch settlers arrived on Manhattan in 1624, naming the town New Amsterdam. Indian claims were bought out for the equivalent of $24. The Dutch sent settlers up the Hudson River (which is easily navigable by sailing vessels) to Albany. The Dutch colony, named New Amsterdam, was run in autocratic fashion by Governor Peter Stuyvesant. It soon had a cosmopolitan flavor, with freedom of religion and numerous ethnic and religious groups; the Dutch brought slaves as house servants.[2] The city was captured in war by the British in 1664; they renamed both the city and the colony for the Duke of York (who later became King James II).

The use of Ellis Island as the checkpoint for millions of European immigrants in the late 19th Century caused New York City's population to swell, as many settled in the city.

Ever since the Draft Riots of 1863, New York was the bastion of Democratic Resistance in the North. It was a Republican mayor however who made the first efforts to coax traditional black Lincoln Republicans into the New Deal coalition. Fiorello La Guardia was a RINO, or Republican New Dealer. Roosevelt provided federal funds to La Guardia and withheld support from La Guardia's opponents. After the 1935 Harlem riot, La Guardia decreed that African-Americans were not to be arrested for anything, and that police patrolling Harlem could not carry nightsticks.[3]

As Mayor, Rudy Giuliani sought to return accountability to city government and improve the quality of life for all New Yorkers. Under his leadership, overall crime fell 57%, murder was reduced by 65%, shootings dropped 72% and New York was recognized by the F.B.I. as the safest large city in America for five consecutive years. Although national crime rates fell in the 1990s, New York exceeded all other cities. Among Giuliani's most notable accomplishments during his mayoralty was his successful assault on pornography businesses in Times Square. The neighborhood had long been a mecca for "sexually oriented businesses", but through a prolonged campaign which included maintaining an alliance of local businesses, conservative and feminist groups and the general public, Giuliani managed to clean it up and replaced it with legitimate theaters, restaurants and shops, making it a world class tourist attraction for families.

Mayor Giuliani, along with New York City Police Department Commissioner Bill Bratton, adopted an anti-crime approach known as the "Broken Window Theory." Which is the notion that if by cracking down on minor crimes such as graffiti or litter, it will lead to stopping more serious crimes before they occur. In 1994 Giuliani and Bratton launched the initiative CompStat, which looked at crime geographically and statistically monitored criminal activity on specific street corners. The program proved to be successful in reducing crime and is still used today. In 1996 it won the Innovations in Government Award from the Kennedy School of Government at Harvard University. However, Bratton resigned in 1996 after having personal disagreements with Giuliani. Soros-trained lawyer tosses a Molotov cocktail into a police vehicle. The Progressive terrorist was bailed out of jail by a former Obama administration intelligence official.[4]

NBC News reported that New York's Deputy Commissioner for Intelligence and Counterterrorism said there is a high level of confidence within the New York Police Department (NYPD) that rioters had organized scouts, medics, and supply routes of rocks, bottles and accelerants to commit vandalism and violence. There are strong indicators they planned for violence in advance while using encrypted communications. NYPD has received intelligence that U-Haul trucks with NJ registrations were aiding looters and vandals by transporting stolen goods and criminal actors.[6]

“Pre-staged bricks are being placed and then transported to ‘peaceful protests,’ which are peaceful protests, but then used by that criminal group within. We’ve had construction sites burglarized in recent days in Manhattan … during a riot, it’s interesting what was taken – bricks.”[7]

video captured the moment rioters in Manhattan chanced upon a cache of bricks between St. Marks Place and Seventh Street in the East Village on Sunday evening, though no construction site appeared to be nearby.[8] 1 year old Davell Gardner, Jr. was murdered by peaceful protesters[10] while in his stroller after the Democrats cut $1 billion in funding for NYPD.[11]

"Before the protests began, organizers of certain anarchists groups set out to raise bail money and people who would be responsible to be raising bail money, they set out to recruit medics and medical teams with gear to deploy in anticipation of violent interactions with police. They prepared to commit property damage and directed people who were following them that this should be done selectively and only in wealthier areas or at high-end stores run by corporate entities....[they] developed a complex network of bicycle scouts to move ahead of demonstrators in different directions of where police were and where police were not for purposes of being able to direct groups from the larger group to places where they could commit acts of vandalism including the torching of police vehicles and Molotov cocktails where they thought officers would not be."[12]

Hawk Newsome, chairman of Black Lives Matter of Greater New York (BLMNY) outlined a “pathway forward”: “We pattern ourselves after the Black Panthers, after the Nation of Islam, we believe that we need an army to defend ourselves." Newsome told FOX News, "If this country doesn't give us what we want, then we will burn down this system and replace it.[13] Cirvona Newsome, BLMNY co-founder and Democrat 2020 primary challenger for Congress (NY-15) said,[14] “For far too long our institutions have protected the abusers and victimized the innocent while trapping people of color in the quicksand of racism, poverty and despair.”[15]

2020 Biden campaign staffers and Hollywood celebrities were among those providing financing and bail money for arrested terrorists.[16] Two attorney's, including an Ivy League corporate lawyer, were charged with after tossing a Molotov cocktail into a police car.[17][18] An Obama intelligence official secured bail over the objections of government prosecutors for the attorney charged with a domestic terror attack on law enforcement.[19] In another event, an out-of-town white woman was charged with attempted murder after tossing a Molotov cocktail into a police van with four law enforcement officers inside.[20]

Three officers were poisoned with bleach while eating at a restaurant.[21] Colin Kaepernick's paymaster's, Nike shoes, were looted.[22]

A one year old Black toddler was murdered while sitting in a stroller during the BLM violence.[23]

New York City is historically considered a liberal city, with the majority of the population voting Democrat. However, the mayor has recently been Republican, in the case of Rudy Giuliani or independent in the case of the liberal Michael Bloomberg. In November 2013, liberal Democrat Bill de Blasio was elected mayor and despite his anti-law enforcement rhetoric and liberal socialistic policies, was re-elected in November 2017. Fox News Channel is based there in Manhattan. Of the 13 congressional districts that include parts of New York City, only one is represented by a Republican (Daniel M. Donovan, Jr. of Staten Island).

New York City has strict gun control laws and although non-lethal self-defense sprays are sold in some pharmacies and sporting goods stores in the city since they weren't legal for civilians in the state until 1996, different answers are given to callers at different police precincts in the city as to whether or not civilians can actually carry and use them for their own protection.[Citation Needed]

New York City is home to top-notch museums in art, architecture, photography, natural history, television, radio and technology, like: The Metropolitan Museum of Art, Solomon R. Guggenheim Museum, The Frick Collection, the National Design Museum, the Museum of Natural History, and the National Academy Museum and School of Fine Arts.[24]

•Lincoln Center for the Performing Arts

•Rose Center for Earth and Space

Shows broadcast from New York City, if they can be considered "culture", include The Tonight Show Starring Jimmy Fallon, The Late Show with Stephen Colbert, and Saturday Night Live. Each of New York City's boroughs is coterminous with a county in the State of New York. The five boroughs are:

Each borough elects its own borough President and district attorney. Unlike the London boroughs, the boroughs of New York City do not operate as local governments. All of the non-Manhattan boroughs are sometimes referred to collectively as "the outer boroughs" as they are arranged in a sort of semicircle around Manhattan. Each borough has its own court system, and two boroughs have separate public library systems.

Prometheus Fountain at the Rockefeller Center.