The American Broadcasting Company (ABC) is a television network in the United States which has been broadcasting since 1948. It is a subsidiary of The Walt Disney Company since the latter purchased the company in 1996.

The original ABC Radio Network, known as ABC Radio, was originally a division of ABC, then became independent (as Cumulus Media Networks) from 2007 until it merged into Westwood One in 2013. It originated in 1927 as the NBC Blue Network, owned by RCA. It became independent of RCA in 1942 after being spun off due to anti-trust litigation and became simply the Blue Network at that point, then switched to its current name on June 15, 1945. The current ABC Radio, now owned by the Walt Disney Company, was launched on January 1, 2015.

Like most other major networks, ABC has a significant liberal bias (though not as bad as that of MSNBC), which includes George Stephanopoulos, the former press secretary for Bill Clinton, acting as a news anchor. The bias has not gone unnoticed, as several of The Walt Disney Company's shareholders, including Justin Danhof of the National Center for Public Policy Research, complained about ABC's liberal bias.[1] Disney CEO Bob Iger, himself a former ABC executive, vehemently denied the accusations in a clear conflict of interest.[2] The liberal bias ultimately came to a head in early 2017, where it showed the so-called documentary When We Rise that depicted the rise of the homosexual movement via a far-Left lens, which ultimately resulted in ABC's ratings decreasing to such an extent that it barely managed to tie with The CW, and dropped behind FOX as well as fellow liberal networks NBC and CBS.[3][4] 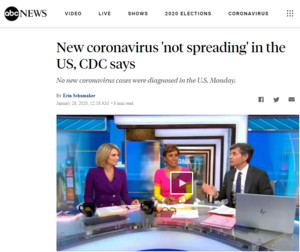 In October 2019 ABC News aired shocking footage supposedly from the frontline battle between Syrian Kurds and the invading Turkish troops. The report and footage was described in shock-filled breathless language, intended to provoke the audience. ABC News anchor Tom Llamas aired the allegedly shocking footage, claiming it showed a fierce Turkish attack on Kurdish civilians. However, the footage ABC News used in their broadcast came from a nighttime machine gun demonstration at the Knob Creek Gun Range in West Point, Kentucky.[6][7]

When the verdict of Kyle Rittenhouse was read, ABC News and reporter Terry Moran attempted to inflame racial tensions with deliberate misreporting; Moran claimed Kenosha police killed a black man, when in fact no black man was killed by police or the ensuing Kenosha riots.[8]

ABC News chief political analyst Matthew Dowd has been accused of sexism for his attacks on young, professional, Millennial women.[9]

In 2015, the ABC News team of Amy Robach and Jim Hill secured an interview with Virginia Roberts Giuffre. Giuffre wanted a shine a spotlight on Epstein and the others who acted with him. "I viewed the ABC interview as a potential game-changer. Appearing on ABC with its wide viewership would have been the first time for me to speak out against the government for basically looking the other way and to describe the anger and betrayal victims felt." ABC never aired the story or gave a reason for doubting the word of accusers.

In October 2017, more than two years after the Giuffre interview, ABC's Diane Sawyer interviewed actress Ashley Judd about her accusations against Hollywood producer Harvey Weinstein. At that time, Judd had not yet filed a lawsuit against Weinstein and he did not yet face criminal charges. Yet ABC viewers heard Judd's accusations in full.

Investigative reporter James O'Keefe of Project Veritas posted a video of ABC News anchor Amy Rohrbach stating that she had the whole Jeffrey Epstein story three years earlier, with video evidence and personal testimony that only came out in 2019. ABC News spiked the story of the most prolific pedophile in American history,[10] raising legitimate questions about where the responsibility of a supposed "mainstream" news organization, that operates on publicly licensed airwaves, to protect child victims begins and ends. ABC responded by beginning an investigation to find the whistleblower who leaked the video evidence.[11]

ABC News Washington bureau chief Jonathan Karl was the rotating head of the White House Correspondents Association (WHCA) during the CCP global pandemic. The WHCA has a customary and traditional role of selecting the journalists who will participate in the White House daily briefing. Karl invited a known propagandist for the Chinese Communist Party (CCP) into the White House briefing room to question President Trump.[12] The Hong Kong/Cayman Islands based Phoenix Media for which Karl's fellow traveller works is actually owned in large part by the Chinese Communist Party (CCP) and by a former CCP propaganda officer.