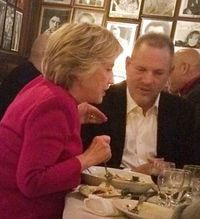 Hillary Clinton dines with Democrat mega donor Harvey Weinstein after the 2016 election, December 13, 2016. Weinstein, a charter founder of the Clinton Legal Defense Fund organized to defend President Clinton from sexual harassment and assault charges, has been accused of rape by 97 women.[1]

Harvey Weinstein, born March 19, 1952 (age 69), is a liberal Democrat Hollywood film producer. In October 2017, following numerous allegations of sexual harassment, sexual assault, and rape against him, Weinstein was fired by his company's board of directors and expelled from the Academy of Motion Picture Arts and Sciences.

On May 25, 2018, he was arrested and charged with rape and other sexual offenses involving women.

Weinstein was one of the founders of the Bill Clinton legal defense fund to defend against allegations of sexual assault.[2]