From Conservapedia
Jump to: navigation, search
Harlem is a district of Manhattan in New York City; it is named after the Dutch town Haarlem. 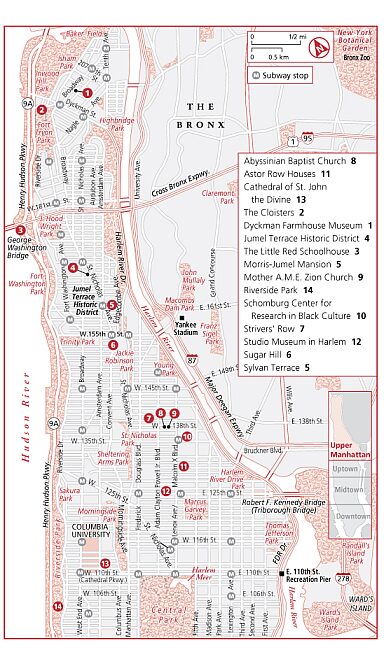 The area was a far suburb until East European Jews arrived 1890–1914, along with a large Italian-American element. It became largely black by 1920,with the migration of African-Americans from the South and the Caribbean. Many new arrivals had little education and came from isolated rural areas. They lacked elementary training in the most simple processes of good health and sanitation and urban living. With a death rate 42% greater than the remainder of New York City, Harlem became a center for quack healers. A large number of 'storefront' churches were established, but most of the ministers were probably charlatans of some kind. Harlem was one of the leading prostitution centers of Manhattan throughout the 1920s.[1]

The politics of the area was dominated for many years by Vito Marcantonio, a fellow traveler of the far left. Black political consciousness surged after a small riot in 1943. In 1944 Adam Clayton Powell (1908-72) was elected to Congress, serving 1944–70. Powell was only the second black elected in the 20th century. He was a charismatic Black Baptist preacher and a leading liberal. His multiple scandals and prolonged absenteeism finally ruined his career. Powell was defeated in the Democratic primary in 1970 by Charles Rangel, a decorated Army hero who is just as liberal as Powell but not quite as corrupt. Rangel now chairs the powerful House Ways and Means Committee, which writes the tax laws. Rangel's Harlem is now only 28% black, as many Hispanics have moved in. The district votes 90% for Democrats in Presidential elections.

Harlem emerged into the limelight of the 1920s as the embodiment of jazz, hedonism and liberal culture. As the supposed home of the 'New Negro,' Harlem received the attention of white thrill-seekers and literati alike. Enthusiasm waned, however, with the advent of the Great Depression.

Harlem in the 1920s was a mecca for black artists and performers, their supporters, and for white and black audiences. The Harlem Renaissance was a flourishing of black art and culture in the 1920s. Famous writers included Alain Locke, Claude McKay, Jean Toomer and Zora Neale Hurston.

In the novels and plays of the Harlem Renaissance, Africa is represented as a lost paradise offering a solace for those to whom the American dream remains inaccessible. While black American authors wished to restore value to the black man, by showing Harlem as a place of nocturnal pleasures they perpetuated the stereotype of the black as a searcher for sensual amusement. In addition, the authors sought to recapture traits that a dehumanizing/industrial society had lost - beauty, harmony of man with nature, and spontaneity - by emphasizing primitivism and exoticism in Africa. Despite its ambiguities, the Harlem Renaissance is the first explicit rebirth among black intellectuals of the racial and cultural bonds linking black America and Africa, a reevaluation of Africa and its past, and a response to the quest for self-identity.

During the 1920s, African Americans experienced an unparallelled creative environment in which the actor controlled both production and artistry. This control was a vital part of all the artistic creations of the Harlem Renaissance, including art, theater, music, and writing. Although several elements of African-American culture contributed to this control, two were particularly important: the idea of carnival, with the reversal of power it creates, and the notion of speaking from behind a mask. As a result, the iconography of the Harlem Renaissance is akin to that of the masque or carnival; it involves a reversal of social position in which the normally marginalized or excluded person or group gains control and becomes the locus of power.[2]