Bill de Blasio, sometimes Bill de Blowhard or Bolshevik Bill (born Warren Wilhelm, Jr. on May 8, 1961 (age 59)), is the far-left 109th mayor of New York City and, as mentioned below, has been described by a fellow Democrat congressman from Staten Island as “the worst mayor” in the city's history.[2] A communist,[3] de Blasio is known for his negativity towards police officers. In one instance in 2017, he skipped a police vigil in order to protest at the G-20 meeting in Germany.[4] He did, however, announced his opposition to state parole board's release of unrepentant cop-killer Herman Bell.[5] Days after De Blasio cut $1 billion and 6,000 officers from the New York Police Department (NYPD) a one year old baby was murdered in the Leftist violence perpetrated by the DNC's Black Lives Matter fundraising operation.[6] 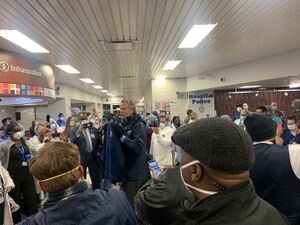 President Trump held a higher favorability rating among New Yorkers than De Blasio.[14] Many have questioned his sanity.[15] De Blasio wanted to ban school children from eating meat on Mondays as part of the War on Cow Flatulence. De Blasio revealed his racism by claiming a merit system is racist. De Blasio hates educational opportunities for minorities in Charter schools and wants to keep poor kids in leftwing indoctrination centers and public schools.[16]

De Blasio is a liberal cultist in denial over leftwing anti-Semitism.[17] De Blasio blamed a spate of hate crime attacks by a group of blacks against Hasidic Jews on "white supremacy."[18] After the fist debate De Blasio had to apologize for paying homage to left-wing mass murderer Che Guevara.[19] De Blasio tweeted: “It’s 2019 & @JoeBiden is longing for the good old days of ‘civility’ typified by James Eastland. Eastland thought my multiracial family should be illegal & that whites were entitled to ‘the pursuit of dead n*ggers.’” … “It’s past time for apologies or evolution from @JoeBiden."[20] De Blasio says Joe Biden must be held to account for the 1994 Crime Bill that imprisoned 2.5 million Blacks and destroyed Black families.[21] 1 year old Davell Gardner, Jr. was murdered by "peaceful protesters" while in his stroller after
de Blasio cut $1 billion in funding for NYPD.[22]

Along with Ocasio-Cortez, De Blasio was against the Amazon deal which would have brought 25,000 jobs to New York. Now he claims he was for it.[23] Considers automation, not immigration, a threat to wager earners, however he vehemently opposes Andrew Yang's vote buying scheme. De Blasio proposed protecting American workers against automation through imposition of a “robot tax.” Homelessness has increased under De Blasio's high tax regime.[24] In addition to free healthcare for non-citizens, de Blasio advocates taxpayer housing subsidies for illegal migrants.[25]

NBC News reported that New York's Deputy Commissioner for Intelligence and Counterterrorism said there is a high level of confidence within the New York Police Department (NYPD) that rioters had organized scouts, medics, and supply routes of rocks, bottles and accelerants to commit vandalism and violence. There are strong indicators they planned for violence in advance while using encrypted communications. NYPD has received intelligence that U-Haul trucks with NJ registrations were aiding looters and vandals by transporting stolen goods and criminal actors.[27] Soros-trained lawyer tosses a Molotov cocktail into a police vehicle. The Progressive terrorist was bailed out of jail by a former Obama administration intelligence official.[28]

A Black father was murdered in a drive-by shooting while walking with his 7 year old daughter shortly after $1 billion was cut from police funding to meet the demands of Black Lives Matter.[32]

2020 Biden campaign staffers and Hollywood celebrities were among those providing financing and bail money for arrested terrorists.[34] Two attorney's, including an Ivy League corporate lawyer, were charged with after tossing a Molotov cocktail into a police car.[35][36] An Obama intelligence official secured bail over the objections of government prosecutors for the attorney charged with a domestic terror attack on law enforcement.[37] In another event, an out-of-town white woman was charged with attempted murder after tossing a Molotov cocktail into a police van with four law enforcement officers inside.[38]

Three officers were poisoned with bleach while eating at a restaurant.[39] Colin Kaepernick's paymaster's, Nike shoes, were looted.[40]

A one year old Black toddler was murdered while sitting in a stroller during the BLM violence.[41]