Andrew Yang, born January 13, 1975 (age 46), was a 2020 presidential candidate for the Democratic Party who left the party the following year. Thought to be more moderate than the progressives in the party, Yang publicly took left-wing positions on issues such as the Green New Deal, universal basic income, gun control, and Medicare for All. Yang imagines that automation will make human beings unemployable.

Yang was the only 2020 Democrat presidential primary candidate to condemn the violent racist attack on journalist Andy Ngo by the Antifa terror organization.[1] In September 2021, Yang renounced[2] his association with the totalitarian fascist Democrat party.[3]

Yang is a corporatist attorney and anti-constitutionalist who opposes the First and Second Amendments. Yang is the living antithesis of Benjamin Franklin, who said, "When people find that they can vote themselves money, that will herald the end of the republic." Yang openly called for Democrats to engage in election fraud in the 2021 Georgia runoff elections.[4]

Yang's disavowal of the work ethic and advocacy of shiftlessness, laziness, and a pointless, unfulfilling life was vehemently opposed by New York Mayor Bill De Blasio. Following the unpopular neo-fascist covid lockdowns of de Blasio, Yang led in polling to replace him as New York mayor.[5]

Yang apologized for supporting Israel when Hamas attacked the Jewish state with Iranian-maufactured missiles.[6] Hamas cannot afford to purchase the missiles, and the missiles were supplied to the terrorist organization by the Iranian regime free of charge. 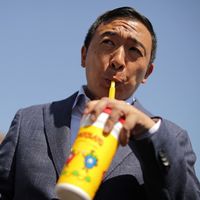 Andrew Yang is seen here destroying the environment we leave to our children with a plastic straw.

Andres Yang is running on a platform of hyperinflation and economic pseudoscience. Yang promises $1,000 a month to anybody who votes for him while collecting the money from whoever is stupid enough to keep working for a living. Yang advocates running the printing presses of the Federal Reserve Board 24/7 until people demand cost-of-living-increases, at which point larger denomination bills will be necessary. Yang longs for the good 'ol days of Weimar Germany and Hitler's pre-Beer Hall Putsch when workers were paid in wheelbarrows of cash, sometimes two times a day.

Yang believes that if the government gave away free money, it would reduce suicide and opioid abuse. Additionally, Yang wants to supplement payments to criminals to stay out of jail. A cultural Marxist, Yang has been endorsed by white supremacists and Richard Spencer[7] for which he is praised as "the most unifying candidate in American history."[8]

Yang is a single party fascist[9] whose proposals have been universally panned by experts.[10] Yang wants to confiscate guns and gas powered vehicles,[11] and to establish a federal Office of internet censorship to shut down Free Speech rights of anyone who dares to counter him and tell the truth.[12] Yang wants to wean Americans off a diet of farting cows and onto a diet resembling Michelle Obama's school lunches.

Yang's mic was muted several times during the debates,[13] leading to speculation among many that the DNC had, again, rigged the presidential nomination process.[14]

Yang, Marianne Williamson, and Bernie Sanders were the only Democratic presidential candidates who came to Tulsi Gabbard's defense after Hillary Clinton's racist, xenophobic, and disrespectful attacks.[15]

Yang dropped out of the presidential race on February 11, 2020, following a disappointing finish in both the Iowa caucus and New Hampshire primary.[16] He subsequently became a "CNN political commentator."[17]