Wall Street during the stock market crash of 1929

Wall Street is a famous road across southern Manhattan which is the physical and figurative heart of the New York City financial district where the stock market exchanges are located. The term "Wall Street" can also refer figuratively to the collective set of commercial banks, brokerages, insurance and investment companies with a nationwide scope, even though they are not located on that particular street. It stands in contrast to the figurative concept of Main Street, which refers to locally owned small businesses in smaller cities and towns.

Today there is sometimes a political tension between the interests of Wall Street and Main Street. For example, Main Street was reluctant to support the $700 billion bailout authorized by Congress in the Financial Crisis of 2008.

Historically, populists, agrarians, and liberals have been quite hostile to Wall Street, as typified by Thomas Jefferson, Andrew Jackson and William Jennings Bryan. However, since the end of World War II, Wall Street has aligned itself with liberalism and globalism. For example, under President Bill Clinton, leading Wall Street financiers played a major role in shaping economic policies, especially Robert Rubin, his Treasury Secretary. Wall Street is often seen by conservatives as representing crony capitalism, rather than a true free market. However, even though it is aligned with liberalism and globalism, among other leftist groups, there was still some animosity towards Wall Street by leftists, such as Occupy Wall Street.

In the 1600s Dutch settlers built a wall in Manhattan to guard against Indians and pirates. A nearby path became a commercial center because the path joined the East River on one side with the Hudson River on the other. Soon merchants built shops and warehouses along the path, and then a city hall and church were constructed. New York City became national capitol from 1785 until 1790. Federal Hall, where George Washington was inaugurated, was located on Wall Street.

In March, 1792, 24 leading merchants met at Corre's Hotel to launch a securities (stock) business in order to win business back from auctioneers, and on May 17, 1792, they signed the Buttonwood Agreement requiring them to trade securities only among themselves and avoid the auctioneers. This became the New York Stock Exchange, later built at 11 Wall Street. 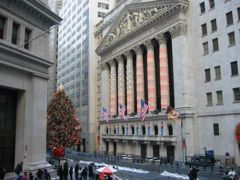 Dow Jones index since 1925, in constant 2009 dollars; it covers 30 industrials on the New York Stock Exchange