From Conservapedia
(Redirected from Electoral college)
Jump to: navigation, search 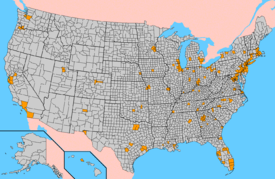 Half of the population lives in these counties, giving undue electoral influence to city centers

The Electoral College is the method by which the United States elects a president every four years. The Founders wanted electors to gather in each state rather than in a common place, thereby minimizing intrigue and corruption. Each state then votes on the presidential candidate. The details are specified in the U.S. Constitution, Article II, Section 1, Clause 3. The top six states having the most electors are California, Texas, New York, Florida, Illinois and Pennsylvania (the latter two are tied at 20 electors); meanwhile, seven states have only 3 electors, the smallest number possible: Alaska, Delaware, Montana, North Dakota, South Dakota, Vermont, and Wyoming.[1]

The Electoral College is an essential institution that promotes:

The electoral procedure to select a President and Vice President is as follows:

The number of electors from each state is determined as being the same as the combined number of each state's senators and representatives. As the number of senators is always two, and the number of representatives is roughly proportional to the state's population (but always at least one), this means that larger states have more electors than smaller states, but smaller states have a proportionately higher number of electors. This mechanism was devised by the Founding Fathers as a compromise between large states (who felt they should have a greater say than the smaller states) and small states (who feared a straight proportional number would leave them too little influence).[4] The 23rd Amendment gave the District of Columbia as many electoral votes as it would have were it a state (it has never had more than the minimum three electors). Although American territories can vote in primary elections, they cannot vote in the general election, and thus have no electors.

Nearly all the states vote on a winner-take-all basis, such that whoever wins a plurality of the votes in that state then receives all of the Electoral College votes for that state. The only two exceptions are Maine and Nebraska, which award two electoral votes to the statewide winner, while the winner of each congressional district gets the electoral vote for that district. Both states would therefore be able to split their share of votes between candidates; however, this has happened only one time: in 2008 Barack Obama won Nebraska's second congressional district, therefore winning one of Nebraska's five votes (John McCain won the other two districts and the statewide vote).

A proposed plan (preferred by many liberal-leaning states) which would effectively abolish the College would have states agreeing to allocate their electoral votes to the winner of the overall national popular vote (even when the state's voters chose another candidate); the plan would not take effect until states comprising 270 electoral votes (a majority of the 538 needed) have agreed to it, and (as it is a proposed interstate compact) would still require Congressional approval. Electoral votes by state per 2010 census, click for larger image.

There have been times when an elector casts a ballot for other than his/her party's candidate (a "faithless elector"). Such cases are rare, as electors are chosen from the most loyal of party supporters; such an elector will lose the party influence or position previously held. And only one time did faithless electors influence the election to an extent: in 1836 the 23 electors pledged for Martin Van Buren chose not to vote for his Vice-Presidential running mate (Richard Johnson) but voted for William Smith (a former South Carolina governor who was not on the ballot), forcing the Senate (under the provisions of the 12th Amendment) to choose; they chose Johnson so their actions had no real impact.

Elections in 1800 and 1824 required the House of Representatives to select a president, as no candidate won a majority. The 1824 vote leader, Andrew Jackson, was later elected in 1828.

In 1876, Samuel Tilden won the popular vote, but Rutherford B. Hayes won the elector vote. The election was marred by allegations of fraud and was settled only by an agreement to end Reconstruction (and essentially allow Democrats to suppress minority voting for nearly the next century).

In the 2000 election, Al Gore narrowly got a plurality of the popular vote, and George W. Bush narrowly won the electoral vote. After a careful (and still considered by liberals to be an incomplete) recount of the election results in Florida, George W. Bush was declared the 43rd President of the United States.

In the 2016 election, Hillary Clinton won the popular vote and Donald Trump won the electoral vote. Rather than trying to win according to the longstanding rules, Democrats, showing their disrespect for the Constitution,[5] called for abolishing the Electoral College.[6] Some Democrats even falsely claimed that the Electoral College was created to protect slavery,[7] and liberals and establishmentarians of both parties claimed that it favored a certain political party over another.[8] Republican Party members who opposed the Electoral College also did so because they believed it would force the GOP to adopt left-wing and globalist positions.[9] Some more principled conservatives and conservative organizations, such as Prager University, defended the electoral college both before[10][11] and after the election;[12][13][14] however, some RINOs condemned it.[15][16]

At the Constitutional Convention in 1787, delegates put forth proposals for several different constitutional structures. The two primary plans, the Virginia Plan and the New Jersey Plan, placed a stark contrast between small states and large states. One part of the Virginia Plan called for Congress to elect the president.[17] Seeking to keep a pure separation of powers, some delegates objected and electors chosen for the role was settled on.

Once the electoral college had been decided on, several delegates (Mason, Butler, Morris, Wilson, and Madison) openly recognized the institution's ability to protect the electoral process from cabal, corruption, intrigue, and faction.

The electoral college came into being in part because of James Wilson, who was an early promoter of the concept.[18] Pierce Butler (Founding Father) also supported the system early in the convention, as he was looking for a way to protect the electoral process against corruption and foreign intrigue.[19]

Federalist No. 68 goes into detail about the Electoral College.

The issue of slavery was not a reason for the introduction of the Electoral College. After the results of the 2016 U.S. presidential election, the Race card was employed in an attempt to shame supporters of the college and the results of the recent election.[20][21][22][23]

The timeline of the convention proves that the Electoral College was not introduced to protect slavery. This conclusion is fallacious, but is held by many despite the facts. The college was a reaction to a proposal which was made as a part of the Virginia Plan, originally introduced on May 29, 1787.[24][25][26] It was viewed as dangerous for the president to be elected by the Congress(the original mode of the Virginia Plan), so to keep the executive independent the college was devised.

Three states – North Carolina, South Carolina and Georgia – voted against the idea of using electors to choose a president. These were the three most pro-slavery states.[27]

Without the Electoral College, a nationwide popular vote determines the president and every voter in the election would be forced into a single group. Thus any vote stolen could impact the outcome, no matter where. However, the Electoral College can help protect an election from voter fraud to an extent due to its nature as a guiding tool for an indirect election. This means votes must be stolen in the right states in order to differently affect the outcome. If 20,000 votes for Donald Trump were stolen in California in 2016, there wouldn't have been any difference since the margin by which Hillary won that state was roughly 4 million votes.[28] But if 20,000 votes were stolen in Michigan, that could very well have changed the outcome, since Donald Trump won that state by only 13,080 votes.[29]

The Electoral College balances power between larger and smaller states to prevent large populations within large states and cities from monopolizing elections, especially taken into account the substantial disparities in population, population density, resources, and needs. Considering that a vast majority of resources supplied to big cities come from rural and suburban areas throughout the U.S., it is also important to give fair representation to smaller states beyond state-by-state power balancing interests and also take into account of economical interests to allow the U.S. to best advance itself in terms of jobs and letting the market thrive.

1. Bloom, Sol, and Johnson, Lars. The Story of the Constitution. Christian Liberty Press, 2001.
2. For an essay on attempts to abolish the Electoral College, see Essay:Electoral College.