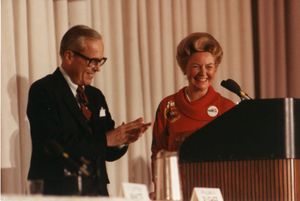 Phyllis Schlafly speaking at CPAC in 1988, when it was more conservative. William Rusher applauds.

The Conservative Political Action Conference (CPAC) is a predominantly libertarian conference consisting of overwhelmingly white male college students, many of whom attend for free or at heavily discounted rates. CPAC historically met in Washington, D.C., in February or March, with attendance increasing beyond 10,000. CPAC outgrew the largest hotels in D.C., and in 2014 through 2017 convened outside of D.C. in the massive Marriott Gaylord hotel in National Harbor, Maryland.

CPAC moved its annual conference in February 2021 to Orlando, Florida.

Shift to the Left

In recent years CPAC has been dominated by impostors who are not really conservative, and Donald Trump even canceled his appearance at CPAC in early March 2016 to avoid a Leftist-type walkout plot against him. In 2018, CPAC banned the pro-family conservative organization MassResistance for its opposition to homosexual "marriage,"[1] and it simultaneously allowed the pro-homosexuality Log Cabin Republicans to attend.[2] By caving into the homosexual agenda, CPAC has largely abandoned its tradition of being the largest annual gathering of conservatives. Also in 2018, CPAC caved to the gun control lobby by keeping the NRA's president's name off its speaking schedule and refusing to advertise his speech.[3] CPAC also canceled a free speech panel after it tried forcing out one of the attendees due to controversial comments he made.[4] The head of the American Conservative Union, which runs CPAC, was Al Cardenas from 2011 to 2014, who is an outspoken critic of Donald Trump and even called him "the great whiner" on the same day that Trump made a specular appearance at CPAC on February 28, 2021.[5]

Students for Life is the largest annual conservative conference that has a balance between men and women in attendance. It sells out with its annual conference of 2000 in D.C., around the time of the March for Life. It also succeeds without the libertarian and big money dominance that increasingly plagues CPAC. But CPAC does remain a good counterweight to the neocons who dominate the Fox News Channel.

In 2010, the CPAC audience demonstrates its lack of social conservatism by ranking issues in the following importance:

There was, however, virtually unanimous opposition among attendees to the policies of the Obama Administration.

Since 2015, CPAC has been increasingly shifting to the Left on immigration, or, at least, deemphasizing the issue.[6][7] CPAC president Matt Schlapp is a lobbyist for a firm that promotes importing foreign workers.[8]

In 2020, humorist and former The Rebel Media journalist Gavin McInnes[9] and InfoWars correspondent Owen Shroyer[10] were kicked out of CPAC for no specific reasons.[11] Although Shroyer blamed TPUSA founder Charlie Kirk for being kicked out, most likely due to an earlier awkward interaction between the two,[12] there is no evidence that he was behind that incident.

In 2021, despite the event being located in Florida, which does not mandate mask-wearing, CPAC forced attendees to wear masks because of COVID-19, and were met with jeers from the crowd of mostly young adults for implementing and enforcing this authoritarian measure.[13] A prominent conservative influencer was even forced to leave for refusing to wear one.[14] Others were ejected for similar reasons.[15] The mask rules led to another controversy, that of the accused use of the Nazi Odal Rune as a stage format. The design firm who created the stage Design Foundry took responsibility for the design of the stage and stated that social distancing requirements led to its stage layout.[16]

Each year the special Ronald Reagan Award is given to a rising star in the conservative movement, and there have been some tremendous recipients in the 1990s and 2000s. In 2010, this award went to the Tea Parties.

The following people did not speak at CPAC 2010: