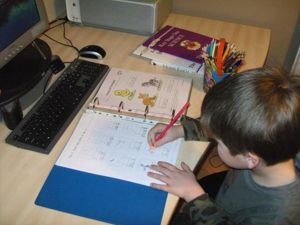 For the homeschooling courses available for free on this website, see Conservapedia:Index
Homeschooling consists of the practice of students receiving education from a parent or guardian, or instructors acting under the direction of a parent or guardian, rather than from teachers in a formal school setting like a public school. Virtually every area of the United States has local support groups for homeschooling, which often meet in church facilities. Nearly 7% of college-educated parents homeschool their children.[1] "In 2012, there were around 1.8 million homeschool students [in the U.S.], and in 2021, that number is expected to be above 5 million."[2]

Homeschooling grew by almost 75% in the eight years before 2011,[3] and more than doubled in the following decade despite attacks from teachers' unions and government bureaucrats.[4] In one survey, "the average homeschooled student scored at the 88th percentile" in the core subjects of reading, language and math.[5] The most successful mathematician in contests in history, Reid Barton, was homeschooled.[6] The greatest gymnast ever, 2016 Olympic champion Simone Biles, was homeschooled. One of the greatest college football players—the first to win the Heisman Trophy as a sophomore -- Tim Tebow, was homeschooled until college.[7] A Wimbledon tennis star, Melanie Oudin, chose homeschooling beginning in 7th grade: "With how much I improved in the first year at home, I knew it was the right choice."[8] Homeschooled students make up many of the top college and graduate students in mathematics today.[9]

Homeschooling parents have many available options to supplement education at home:

Homeschoolers often include local "after school" enrichment programs like scouts, 4-H, sports, music lessons, karate or dance classes, public library programs, and summer camps as part of their educational program. Some areas have extracurricular clubs and activities specifically for homeschoolers, some allow homeschoolers to participate in local public school's after school activities, and some homeschoolers participate in extracurricular activities independently from their schooling through private organizations. Homeschool graduates vote in higher percentages: in 2003, "76 percent of homeschool graduates surveyed between the ages of 18 to 24 voted within the last five years, compared to only 29 percent of the corresponding U.S. population."[10]

Families who homeschool their children do so for a number of reasons. A 2001 study by the US Census Bureau found that the single largest reason that parents homeschool is that they feel they can give their children a better education at home. This accounted for 50% of the homeschooling families; religious reasons came in second at 33%.[13] Other frequently mentioned reasons include dissatisfaction with academic instruction at other schools, the ability to provide religious or moral instruction along with academics, the ability to control what the child is being taught, flexibility in meeting the needs of a child with special needs (such as a physical or mental health problem, a temporary illness or giftedness), flexibility in scheduling family life, and concern about safety, drugs, and peer pressure at other schools.[14]

Admissions departments at major colleges are now familiar and comfortable with homeschooling, according to a 2004 Boston Globe article. The article quotes a Williams College admission officer as saying:

"We read homeschoolers' applications just like any other application. They don't get any special consideration, but they're not discriminated against, either. Their applications are interesting, and they've certainly done independent work their whole lives."

In the United States, some states permit homeschooled students to participate in extracurricular activities at their local public schools.

In one way or another equal access is expressly allowed by the states of Arizona, Colorado, Florida, Idaho, Illinois, Iowa, Maine, Massachusetts, Michigan, Minnesota, Nevada, New Hampshire, North Dakota, Oregon, Pennsylvania, Tennessee, Utah, Vermont, Washington, and Wyoming. In most other states, participation is worked out on a case-by-case basis.[17] In addition, some states, such as Alabama, are considering equal access legislation.[18] In New Jersey, school athletic associations dominated by public schools exclude homeschoolers from participation in athletics, even though they allow students at different charter schools to participate.[19]

Many studies over the last few years have established the academic excellence of homeschooled children.[20] Most recently, the average ACT (American College Testing) score of homeschooled students in 2009 was higher than the national average.[21] ACT-tested graduates reporting themselves as home-schooled numbered 4,593 in 2000, a 41-percent increase. Home-schooled students achieved a composite average of 22.8, 0.1 points higher than in 1999.[22] An extensive 2009 nationwide study conducted by Dr. Brian D. Ray of the National Home Education Research Institute,[23] found that homeschoolers scored 34-39 percentile points higher than the norm on standardized achievement tests. The new study was described as “the most comprehensive study of homeschool academic achievement ever completed,” in which Ray surveyed 11,739 homeschooled students from all 50 states, Guam, and Puerto Rico, and drew from 15 independent testing services. Demographically, 82.4 percent of homeschooling parents identified themselves as Protestant Christian, 12.4 Roman Catholic, 1.1 percent atheist/agnostic, 0.8 percent Mormon, 0.4 percent Jewish, 0.2 percent Eastern Orthodox Christian, and 0.1 percent Muslim. Neither the income or educational level of parents appreciably affected the results.[24]

Reasons for homeschooling include:[25]

Reasons Not to Homeschool

It should also be noted that stay at home moms, the most common teachers for homeschooling, reported having happier lives than their working counterparts.[39]

A thriving homeschooling movement exists in Canada, and homeschooling also fares well in Australia and New Zealand. It is relatively new in South America, and reportedly faces strong government resistance in places such as Brazil. Homeschooling also faces significant challenges in many other counties. The governments in Shanghai and Beijing are largely opposed to homeschooling. In European countries, it is sometimes more restricted than the United States, or illegal, such as in Germany. In Switzerland, many cantons still allow homeschooling, but not all.[40] Sweden recently passed legislation which is expected to ban all homeschooling, except for children with medical exemptions, or foreign workers with the appropriate work visas.[41][42] Recently alarming in England is a June 11, 2009, report on home education by Graham Badman, former Managing Director of Children, Families and Education in the County of Kent, which would effect critical changes in regulation of homeschooling. The report, which was accepted in full by the British Secretary of State for Children, Schools and Families, uses the United Nations Convention on the Rights of the Child (UNCRC) to militate against the educational rights of parents.[43]

Homeschooling is rapidly rising in China, despite the communist country's stringent education regulations.[45]

Homeschooling in the United States

In the United States, homeschooling is generally legal in all areas, though states vary widely on the number of requirements that a family must meet in order to homeschool their children.

The Home School Legal Defense Association provides a map dividing states into four categories, and providing state law on each: No Notice (the state does not require any notice for parents to begin homeschooling), Low Regulation (only notice is required but nothing more), Moderate Regulation (requires notification, test scores, and professional evaluation of student progress), and High Regulation (same as Moderate plus items such as curriculum approval, teacher qualification, and home visits by school officials).[46] Information is also provided for Washington, D.C. and American territories.

Notwithstanding state law, courts have not hesitated to impose their liberal views on this issue. For example, in New Hampshire (a state classified as Moderate Regulation), a court-ordered a thriving, 10-year-old homeschooled Christian girl to attend public school, solely in order to expose her to "different points of view at a time in her life when she must begin to critically evaluate multiple systems of belief and behavior."[47][48] On the other hand, a 1985 Texas case clarified that homeschools in Texas were considered private schools, which the state had no authority to regulate under existing law.[49] This has made Texas, a generally conservative state (and listed by the Association as Low Regulation)[50], one of the friendlier jurisdictions for homeschool families, though local school districts still attempt to impose their – generally illegal – requirements on homeschool families.

Education at public school year-round from about ages 6 to 18 became common only in the 20th century due to compulsory education laws. The first law requiring attendance at public school passed in Massachusetts in 1852; the second such law passed in Washington D.C. in 1864; and most states did not pass mandatory schooling laws until between 1870 and 1917.[52][53]

But even under compulsory education laws in the late 1800s, the school year was only twelve to twenty weeks long. Very few stayed in school from ages 6 to 18. For example, by 1900, only 6% of Americans had graduated from a formal high school. Moreover, these students did not learn basic skills like reading in school; they learned those at home.[54]

Baltimore's Calvert School began selling the school's curriculum to parents in 1905. Within five years, more than 300 children were enrolled in Calvert's correspondence courses. Over the next hundred years, Calvert served over 500,000 children from a wide variety of families nationwide and around the world, including missionary families and those in remote locations.[55]

The homeschooling movement began in the 1960s from very different ideological sources. Seventh-Day Adventists Dr. Raymond and Dorothy Moore pioneered homeschooling as a result of their research into education and their concern about the harmful effects of schooling on students, particularly boys, between ages 5 and 15.[56] On the other side of the political spectrum, John Holt wrote a book critical of schooling in 1964, entitled How Children Fail. Holt was "a left-winger who regarded schools as instruments of the bureaucratic-industrial complex."[57] More generally, millions of Americans were alarmed at the 1962 U. S. Supreme Court ruling which banned school-sponsored prayer in public schools, and many of those parents began to look for alternatives.

Truancy laws brought pioneering homeschoolers into conflict with local officials. The first New York Times story on "home schooling" appeared in 1974, and concerned two parents charged with "educational neglect" by the Westchester County Department of Social Services. Tests showed that they performed at or about grade level "except for one who is a little slow in reading," and the parents received strong support from a state senator.[58] By the mid-1980s the Times was running articles with titles like "Schooling in the Home: A Growing Alternative" and "There Are Benefits In Homeschooling," and states were legalizing homeschooling.[59] A 1997 article said "It's not only Christian fundamentalists any more" and a 2003 article noted "Unhappy in Class, More Are Learning at Home."

New York is the only state which currently requires all home school students to take the GED equivalency exam in order to receive a high school diploma. However, in most cases, they are not required to take the otherwise-mandatory exam prep course first.

Prominent people who were homeschooled

Throughout history, a remarkably high percentage of accomplished people were homeschooled, including many great mathematicians. Here is a growing list of such achievers:

In addition, a number of prominent people have chosen to homeschool their children. David Guterson, author of the novel Snow Falling on Cedars (1994), which won the 1995 PEN/Faulkner Award, also wrote Family Matters: Why Homeschooling Makes Sense (1992), an account of his family's homeschooling journey.[136] Actor and recording artist Will Smith and his wife actress Jada Pinkett Smith homeschool their children.[137] Michele Bachmann homeschooled her own children, but Minnesota authorities prohibited the homeschooling of foster children (Michele Bachmann also had 23 foster children).[138] Roseanne Barr stated in an interview that she has started to homeschool her 11-year-old son.[139] Kristin Maguire, head of the South Carolina board of education, which governs all its public schools, homeschools all four of her children.[140] Elizabeth Edwards, the late wife of the Democratic vice-presidential nominee (2004) and presidential candidate (2008) John Edwards, homeschooled both of their youngest children.[141] The wife of Glenn Beck homeschools their children. Ayn Rand praised homeschooling in her popular work, Atlas Shrugged: "I came here, not merely for the sake of my husband’s profession, but for the sake of my own. I came here in order to bring up my sons as human beings. I would not surrender them to the educational systems devised to stunt a child’s brain, to convince him that reason is impotent, that existence is an irrational chaos with which he’s unable to deal, and thus reduce him to a state of chronic terror."[142]