Not to be confused with the Gospel

The Four Gospels of the Bible (from the Greek for "good news") are the first four books of the New Testament. Two of the gospel accounts of Jesus are attributed to eyewitness accounts by two of His Apostles (Matthew and John), and one of the gospel accounts is attributed to a physician-historian who did not know Jesus personally but interviewed many about him (Gospel of Luke). The Gospel of Mark was likely written by an eyewitness of Jesus as a young boy who tagged along with his mother as she followed Jesus. There was no ambiguity among the early church fathers as to the authorship of the gospels, with their earliest writings attesting to our current titles.

"Gospel" is derived from the Middle English word "godspel," in which "god" means "good" and "spel" means "news." Thus "Gospel" literally means "good news," and some denominations like to use the phrase "good news" because they feel it conveys the nature of the Gospel clearly. It is a translation of the Greek word εὐαγγέλιον (euangelion), which is also the root of the word "evangelist;" an evangelist is someone who spreads the good news. The "good news" here is, specifically, the news of Christ's redemption. The four Gospels offer different, yet complementary, accounts of the story of Jesus's life and teachings, and lay the foundation for the doctrine of Christ's redemption.

The relationship of the Gospels 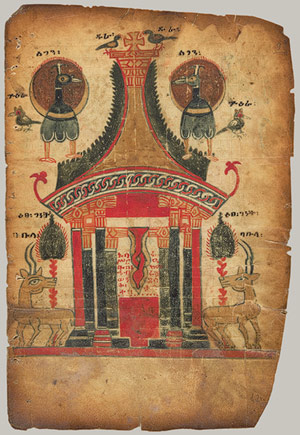 Although Matthew comes first in Biblical order, since the nineteenth century the Gospel of Mark is widely agreed to be the oldest of the Gospels (see Bible: The Gospels). However, this view has more recently been disputed.[1] The hypothesis of Marcan Priority holds that Matthew and Luke were probably compiled slightly later, drawing both from Mark, eyewitness accounts, and oral testimony. It is also possible that Matthew or Luke each used the other as a source as well, although which one would have come first is unknown. John is the last of the Gospels, the most theologically mature, and the strongest in its emphasis on God's loving sacrifice of his only son, Jesus, and the ways in which this sacrifice redeemed all mankind. The first three canonical Gospels are often called the "synoptic" (sighted with another) Gospels, as they tell slightly different versions of the same underlying story of Christ's life and ministry on earth.

Luke was said to have been a Greek physician (see Col 4:14) who accompanied Paul and also wrote the Acts of the Apostles describing the arrival of the Holy Spirit. Unlike the Gospels of Matthew and John, written as firsthand accounts, the Gospel of Luke records eyewitness accounts of others, much as a doctor asks a patient for his medical history and then writes it down in the medical file. Due to Luke's professional nature, his Gospel is very comprehensive about Jesus' life and resurrection, and it also conveys the great sense of joy that Jesus' family, friends and followers felt.

In addition to the four Canonical gospels, other texts claiming to record the accounts of Jesus's earthly ministry have survived in part or in whole. Most notable among these is the Gospel of Thomas, which contains additional sayings and teachings. Recently, a Gospel of Judas surfaced, but this text is decidedly a later one, and its claim for any original authority is very slim. These Gospels are considered apocryphal by modern Christianity, and therefore not authoritative texts.

Among fragments that still survive are the gospels according to the Hebrews (much prized by the early Jewish Church), according to the Egyptians, of the Ebionites, of Philip, of Matthias, of Peter, of Thomas (almost complete), of Nicodemus, of Bartholomew, of Pseudo-Melito, of Joseph of Arimathaea, of James, of Pseudo-Matthew, of Barnabas and a whole collection of infancy gospels.[3]

The Teachings of Our Lord Jesus Christ are found in the four Gospels and other holy documents. The New Testament: Early Christian Writings.