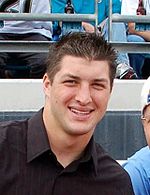 Timothy Richard "Tim" Tebow (born August 14, 1987) is an outspokenly pro-life, Christian football player who initially gained fame by winning championships for the University of Florida Gators. Extraordinarily athletic, Tebow is 6'3", weighs about 240 pounds, and is remarkably quick for his size.[1] He was the first sophomore to win the Heisman Trophy and led the Gators as its quarterback to two BCS Championships during his four years playing for UF in Gainesville, a rare feat. He has recently played minor league baseball for the New York Mets and the NFL Jacksonville Jaguars expressed interest in 2021 by signing him as a tight end, but then cut him prematurely[2] in a record-breaking 3rd NFL sham tryout against him. Liberal trolls demonically rejoiced.

Tebow has been repeatedly excluded by the morally bankrupt NFL despite playing far better than what is needed to make a team, and despite having a higher quarterback rating than some players who are not cut.[3] The most plausible explanation for this is the increasingly pro-homosexual and pro-gambling bias of the league, contrary to the Bible. The NBA and major league baseball have had a few Bible-quoting stars, but the more deceitful NFL bosses particularly pander to the pro-homosexual media.

He was selected by the Denver Broncos as the 25th pick of the first round of the 2010 NFL Draft. In 2011, with the team in last place, the Broncos decided to start Tebow as quarterback. Tebow had an impressive seven-game winning streak, and took the Broncos to the division championship. In the first round of the playoffs, Tebow led the Broncos to a stunning upset victory over the Pittsburgh Steelers with 316 passing yards for an average of 31.6 yards per toss, confounding his critics and causing a million searches on the internet for the meaning of John 3:16.The Broncos were subsequently eliminated by the New England Patriots the following week.

Despite Tebow's success, that off season the Broncos signed quarterback Peyton Manning to a deal costing nearly $100 million, and then immediately traded Tebow to the New York Jets. During the 2012 season, Tebow was largely kept on the bench despite continued poor play by starting quarterback Mark Sanchez. For example, on November 22, Sanchez played the entire game against the Patriots, a game which the Jets lost 49-19. Even after Sanchez repeatedly turned the ball over by throwing interceptions and fumbled the ball by running into his own lineman after a botched handoff, Tebow did not get into the game.

Finally, Jets coach Rex Ryan benched Sanchez, but he (or the owner) still refused to give Tebow any real playing time.[4] The repeated refusal to play Tebow became a bigger story than which side won or lost the game itself.

On April 29, 2013, after the draft weekend, the unsuccessful Jets waived their rights to Tebow. On June 10, 2013, Tebow signed a contract with the New England Patriots, but the Patriots released him before the start of the season after barely giving him a chance. The Patriots may have been using Tebow as a public relations gimmick to deflect bad publicity about the team, whose star tight end was being prosecuted for murder. In 2015, Tebow signed with the Philadelphia Eagles but was released after the team's final preseason game, despite playing far better than necessary to make the team.[5]

In 2016, Tebow signed a contract to play professional baseball for Columbia Fireflies within the New York Mets minor league system. In his first at bat, Tebow hit a home run. In June 2017 he was promoted to the Class-A St. Lucie Mets organization. In his first 10-games, 2 home runs and a .345 average after 10 hits in 29 at-bats

Tebow is one of Conservapedia's Greatest Conservative Sports Stars and was a runner-up for Conservative of the Year 2011.

Tebow was homeschooled until college. He is an outspoken pro-lifer; his mother, while pregnant with him, developed a rare illness that could adversely affect her pregnancy and had been told to have an abortion rather than to give birth to him. Tebow appeared in a pro-life television ad that aired during the 2010 Super Bowl, risking retaliation against his career by pro-aborts and the liberal media.[6]

Tebow has publicly confirmed that he is a virgin. He has been mocked by liberals for waiting until marriage to have sex as a result of his faith.[7] Tebow answered a highly personal question at a press conference about his sex life by revealing that he practices abstinence:[8]

Tebow volunteers on mission trips, one of which in the summer of 2008 to the Philippines was chronicled in an issue of the ESPN Magazine.

His faith in Christ is a well-known fact inside and outside the sports world.

Tebowing is the act of kneeling on one knee, resting your head on your fist and giving thanks. It is named for Tebow's fashion of public prayer.

Some liberal critics quote the Bible, Matthew 6, verses 5 and 6, which has no application here because there is nothing hypocritical about Tebow:

And when you pray, don't be like the hypocrites. They love to pray when standing in the synagogues and in the street corners, so that they may be seen by men. I tell you truly: They will get what's coming to them. But you, when you pray, go into your inner room, close your door and pray to your Father who is in secret, and your Father who sees what is done in secret will reward you.

Liberals in the sports industry have been long opposed to Tim Tebow because they do not want the spread of Christianity in the NFL. He has been subjected to harassment and criticism for his outward expression of his faith in Christ. Liberals use the accusation, with no basis, that he is a sub-par player as a shield for the fact that they are afraid of the negative reaction of the lame-stream media, which they fear will result in negative publicity and loss of sponsorship for the NFL. Their blinkered philosophy cannot understand that embracing Tebow and his message would lift the NFL out of its current doldrums.