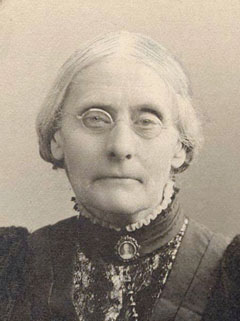 Susan Brownell Anthony (1820 - 1906) was born on February 15, 1820 in Adams, Massachusetts to a family of eight children. Her parents were Daniel and Lucy Anthony. The family held to strict Quaker beliefs, and from very young age Susan was taught the importance of self-worth and being active in the world. The Anthony children were not permitted to play with toys, believing they wasted time and effort. She learned to read and write at the amazingly low age of three years old. Susan attended public schools as first, but when they would not teach her long division she was withdrawn from public school and homeschooled. At the age of 17 she took on a teaching position, continuing to teach until she eventually settled down in Rochester, NY. Anthony never had any children or got married, although she nonetheless held immense respect for the concept of motherhood.

In 1848 she made her first public speech at a Daughters of Temperance supper. The following year she was elected president of Rochester branch of the Daughters of Temperance and raised money for the cause. In 1851, Anthony met Elizabeth Cady Stanton and a lifetime friendship ensued. In 1853 Anthony and Stanton founded the Women's State Temperance Society. When a petition was rejected by the state because most of the signers were women and children, Anthony decided women needed the right to vote so their opinions would be recognized. Because of this stance, she and Stanton were criticized and eventually resigned from the Women's State Temperance Society.[1]

In 1854, Anthony took up the abolitionist movement until the Civil War began in 1861. As with most leaders of the early women's rights movement, including her friend Elizabeth, Susan was a staunch anti-abortionist. While much is made of the work of Anthony and Stanton to the Women's Rights movement, their strong pro-life positions are kept hidden from modern thought. After the Civil War came to an end, she founded the American Equal Rights Association in 1866 along with Stanton. Susan did not stop with her activist habits here. She took on the women’s suffrage fight in the 1860s as well, wanting the same voting rights that were to be given to freed slaves via the 14th and 15th Amendments to the Constitution.[1]

Anthony and Stanton started a paper, the Republic. The paper's motto: "The true republic - men, their rights and nothing more; women, their rights and nothing less" demonstrated their devotion to woman's rights.[2] For nine years, Anthony lectured on women’s rights and abolition, from 1851-1860. This was partly to pay off the $10,000 debt from starting the Republic, but also because she felt very strongly about this issue.

Susan B. Anthony died in March 13, 1906 due to complications from a stroke.

In 1979, Susan B. Anthony was honored by a U. S. dollar coin, the first of several attempts to introduce a non-silver dollar coin. It was unpopular, because it was too similar in size and appearance to a quarter. Originally, it had been intended to be an eleven-sided polygon, but the makers of coin-operated vending machines insisted that it be round. More recent United States dollar coins, such as those depicting Sacagawea and George Washington, have been tinted a gold color to make them visually distinctive.

She alongside several of her fellow Suffragettes also was noted to be a staunch opponent of abortificants,[3][4][5] with her writing that her sister will ultimately pay the price for "the day she forces nature", in reference to an abortion the latter recently had, has been harshly critical of those in support of abortion (or "restellism" as it was called back then), refusing advertisements for restellism for Revolution, her Suffrage newspaper, and gave a speech in 1875 declaring "When the office of maternity shall be held sacred … then, and not till then, will this earth see a new order of men and women, prone to good rather evil."[6]

Anthony is one of only 102 Americans to be part of the Hall of Fame for Great Americans.