Karl Marx said "Religion is the opium of the people".[1] Marx also stated: "Communism begins from the outset (Owen) with atheism; but atheism is at first far from being communism; indeed, that atheism is still mostly an abstraction."[2]

Vladimir Lenin similarly wrote regarding atheism and Communism: "A Marxist must be a materialist, i. e., an enemy of religion, but a dialectical materialist, i. e., one who treats the struggle against religion not in an abstract way, not on the basis of remote, purely theoretical, never varying preaching, but in a concrete way, on the basis of the class struggle which is going on in practice and is educating the masses more and better than anything else could."[3]

In 1955, Chinese Communist leader Zhou Enlai declared, "We Communists are atheists".[5] In 2014, the Communist Party of China reaffirmed that members of their party must be atheists.[6] See also: China and atheism

In 2016, the International Business Times reported: "A senior Chinese advisor on religious affairs has said the country should promote atheism throughout society, in remarks that appear to reflect a deepening campaign to reinforce traditional Marxist values in China — and could add to concern about official attitudes among believers in the country’s five officially recognized religions."[7]

In 2014, the New American website indicated: "The Communist Party of China (CPC) is letting its members know that the party’s official adherence to militant atheism has not changed; Party members are not allowed to be Christians, or to hold any other religious beliefs. That is the clear message sent by a top Party official in an editorial published on November 14 in the Global Times, the international version of People’s Daily, the official newspaper and mouthpiece of the CPC."[8]}}

There is growing persecution of Christians by the Chinese government.[9]

The Russian Revolution caused the most notable spread of atheism

According to the University of Cambridge, historically, the "most notable spread of atheism was achieved through the success of the 1917 Russian Revolution, which brought the Marxist-Leninists to power."[10]

Vitalij Lazarʹevič Ginzburg, a Soviet physicist, wrote that the "Bolshevik communists were not merely atheists but, according to Lenin's terminology, militant atheists."[11] However, prior to this, the Reign of Terror of the French Revolution established an atheist state, with the official ideology being the Cult of Reason; during this time thousands of believers were suppressed and executed by the guillotine.[12] The French Revolution, in fact, had also been a massive inspiration for Karl Marx in forming Communism, in particular the events of the Reign of Terror, which he made clear not only that he intended to reenact, but in a Prussian newspaper, he also made clear that he intended to ensure that the violence as a result of the Communists would outclass even that of the Reign of Terror. Owing to this, the Bolsheviks also were enamored with the French Revolution, to the extent of making plans to create statues of various French Revolutionary figures such as Maximilien de Robespierre, Georges Danton, Jean-Paul Marat, and François-Noël Babeuf, termed Monumental Propaganda, and had even used as their anthem a Russian version of La Marseillaise called "The Worker's Marseillaise" before creating the Internationale as their anthem.

The atheism in Communist regimes has been and continues to be a form of militant atheism which led to various acts of repression, including the razing of thousands of religious buildings and the killing, imprisoning, and oppression of religious leaders and believers.[13]

The persecution of Christians in the Soviet Union was the result of the violently atheist Soviet government. In the first five years after the October Revolution, 28 bishops and 1,200 priests were murdered, many on the orders of Leon Trotsky. When Joseph Stalin came to power in 1927, he ordered his secret police, under Genrikh Yagoda to intensify persecution of Christians. In the next few years, 50,000 clergy were murdered, many were tortured, including crucifixion. "Russia turned red with the blood of martyrs", said Father Gleb Yakunin of the Russian Orthodox Church.[14] According to Orthodox Church sources, as many as fifty million Orthodox believers may have died in the twentieth century, mainly from persecution by Communists.[15]

In addition, in the atheistic and Communist Soviet Union, 44 anti-religious museums were opened and the largest was the "Museum of the History of Religion and Atheism" in Leningrad's Kazan cathedral. Despite intense effort by the atheistic leaders of the Soviet Union, their efforts were not effective in converting the masses to atheism.[16][17]

China is a Communist country. In 1999, the publication Christian Century reported that "China has persecuted religious believers by means of harassment, prolonged detention, and incarceration in prison or `reform-through-labor' camps and police closure of places of worship." In 2003, owners of Bibles in China were sent to prison camps and 125 Chinese churches were forced to closed.[18] China continues to practice religious oppression today.[19] According to Asian Economic News, in 2004 the atheistic and Communist government of China had an internal document which directed the Chinese media to promote atheism, instructed internet media to remove user comments that advocate alternative spiritual views, and called for a ban on publications that disseminate religious material out of step with Marxism or atheism.[Citation Needed] The efforts of China's atheist leaders in promoting atheism, however, is increasingly losing its effectiveness and the number of Christians in China is explosively growing.[20][21] China's state sponsored atheism has been a failure and a 2007 religious survey in China indicated that only 15% of Chinese identified themselves as atheists.[22]

North Korea is a repressive Communist state where public religion is discouraged, and is officially an atheist state.[23] The North Korean government practices brutal repression and atrocities against North Korean Christians,[24] and all open religious activity in North Korea was persecuted and eradicated after Kim Il-sung took power, only to be revived in the present as part of a political show.[25]

It has been estimated that in less than the past 100 years, governments under the banner of Communism have caused the death of somewhere between 40,472,000 and 259,432,000 human lives.[26] Dr. R. J. Rummel, professor emeritus of political science at the University of Hawaii, is the scholar who first coined the term democide (death by government). Dr. R. J. Rummel's mid estimate regarding the loss of life due to communism is that communism caused the death of approximately 110,286,000 people between 1917 and 1987.[27] Richard Dawkins has attempted to engage in historical revisionism concerning atheist atrocities, but was shown to be in gross error.

The website Victimsofcommunism.org declares concerning atheistic Communism and the use of torture: "Significantly, communists did not merely try to block or halt religious faith but to reverse it. This was particularly true for Romania, even before the Nicolai Ceausescu era. This meant not just forbidding religious practice and jailing ministers and believers but employing torture to force them to renounce their faith. It was not enough to contain, silence, even punish believers in prison; it was decided they must be tortured in truly unimaginably degrading ways to attempt to undo religious faith."[28]

On the other hand, Harvard University historian Niall Ferguson declared: "Through a mixture of hard work and thrift the Protestant societies of the North and West Atlantic achieved the most rapid economic growth in history."[32] In China, the growth in religion has accompanied China’s fast economic growth over the last twenty years.[32] Christianity is seeing rapid growth in China and the historian Niall Ferguson attributes this recent economic growth to the Protestant work ethic being more incorporated into Chinese society.[32] See also: Protestant work ethic and Growth of Christianity in China

Nikolai Yezhov walking with Joseph Stalin in the top photo taken in the mid 1930s. Subsequent to his execution in 1940, Yezhov was edited out of the photo by Soviet Union censors.[33]

See also: Atheism and historical revisionism and History of atheism

In terms of academic and popular history, the Communist Party of the Soviet Union (CPSU) often engaged in historical revisionism via their control of political/ideological public discourse (media, education, etc.) and via the monitoring/silencing/imprisonment/persecution of citizens through the KGB.[34]

During and subsequent to the rule of Nikita Khrushchev (1956–64), there was competition between the pro-Stalinists and anti-Stalinists in terms of how Soviet history was portrayed.[35]

The theory of evolution played a prominent role in regards to atheistic Communism.[36][37] Communists, in particular Stalinists, favored a version of Lamarckism called Lysenkoism developed by the atheist Trofim Denisovich Lysenko.[38] Lysenko was made a member of the Supreme Soviet and head of the Institute of Genetics of the Soviet Academy of Sciences. Later Lysenko became President of the All-Union Academy of Agricultural Sciences.[Citation Needed] Many geneticists were imprisoned and executed for their bourgeois science, and agricultural policies based on Lysenkoism that were adopted under Stalin and Mao caused famines and the death of millions.[38]

In atheistic Communist regimes forced labor has often played a significant role in their economies and this practice continues to this day (see: Atheism and forced labor).[40][41][42][43] 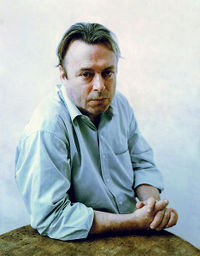 Atheist Christopher Hitchens is known for having a history of heavy drinking.[44]

Nobel Prize winner Aleksandr Solzhenitsyn was asked to account for the great tragedies that occurred under the brutal Soviet Communist regime he and fellow citizens suffered under.