Below are resources on atheism and racism.

Razib Khan points out in Discover Magazine, "most secular nations in the world are those of East Asia, in particular what are often termed “Confucian societies.” It is likely therefore that the majority of the world’s atheists are actually East Asian."[5] See: Asian atheism and Global atheism

Leroy Adams writes in an article entitled What is it like to be Black in China?: 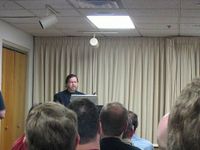 The atheist and evolutionist PZ Myers giving a presentation to a group that is likely largely made up of white males.[10][11][12] In June 2010, PZ Myers commented that atheist meetings tend to be significantly more attended by males.[13]

Craig Cobb, a leader in the atheistic Creativity Movement, stated: "I don't understand Christians. They have a need to be morally superior than the next guy. ... They are very threatened by anything with racial cohesion."[15]

In the United States, blacks have the highest rate of religiosity.[16] Among Hispanics, religion has traditionally played a significant role in daily activity.[17]

The atheist Sikivu Hutchinson declared “If mainstream freethought and humanism continue to reflect the narrow cultural interests of white elites who have disposable income to go to conferences then the secular movement is destined to remain marginal and insular.”[18]

The atheist community has not had significant outreach to racial minorities within the Western World whereas Christians have done this (particularly among the poor).[19] See also: Atheism and uncharitableness

In 2010, an atheists' conference was organized in the United States concerning the future direction of the atheist movement and 370 people attended. The conference, sponsored by the Council for Secular Humanism, drew members from all the major atheist organizationsin the United States. The New York Times described the attendees as "The largely white and male crowd — imagine a Star Trek convention, but older..."[20]

In 2011, Beliefnetnews reported concerning the race and gender of American atheists:

Charles Lee Smith, atheist activist and last American convicted of blasphemy in 1928, was an anti-Semite and white supremacist.

João Carlos Holland de Barcellos sees sperm donation as "an atheist’s way to achieve immortality."[24] These self-hating atheists of Brazil, who are predominantly single women and lesbian couples, order sperm from the United States in order that their offspring might have blonde hair and blue eyes, which they consider to be superior.[24] The United States, however, is one of the most highly religious countries in the industrialized world.

Cultural diversity of the atheist population

Since World War II a majority of the most prominent and vocal defenders of the evolutionary position which employs methodological naturalism have been atheists and agnostics (see also: Causes of evolutionary belief).[25] Charles Darwin's book The Origin of Species by Means of Natural Selection, or the Preservation of Favoured Races in the Struggle for Life has been translated into 35 languages.[26]

In terms of its geographic distribution, Christianity is a much more a global religion than most, if not all, religions (See also: Global Christianity).[27][28] The Bible has been translated into 518 languages and 2,798 languages have at least some portion of the Bible.[29]

See also: Atheism and evolutionary racism and Social effects of the theory of evolution

As noted above, since World War II a majority of the most prominent and vocal defenders of the evolutionary position which employs methodological naturalism have been atheists.[25] The errant and ill-founded writings of atheist Charles Darwin (see: religious views of Charles Darwin) ,[30] which became very influential in the late 19th century, provided a pretext for racism.

Evolutionary racism refers to a racist philosophy based on Charles Darwin's evolutionary theory. It assumes that men have continually evolved, and thus some races are more evolved than others. It replaces Christian morality with the atheistic "survival of the fittest" ideology of Social Darwinism. The atheist Ernst Haeckel was a virulent evolutionary racist. The agnostic and staunch evolutionist Stephen Gould admitted the following:

When asked in an interview, "If we do not acknowledge some sort of external [standard], what is to prevent us from saying that the Muslim [extremists] aren’t right?", Richard Dawkins replied, "What’s to prevent us from saying Hitler wasn’t right? I mean, that is a genuinely difficult question, but whatever [defines morality], it’s not the Bible. If it was, we’d be stoning people for breaking the Sabbath."[34]

The interviewer wrote in response, "I was stupefied. He had readily conceded that his own philosophical position did not offer a rational basis for moral judgments. His intellectual honesty was refreshing, if somewhat disturbing on this point."[34]

The Creativity Movement, formerly known as the World Church Of The Creator, is an atheistic white supremacist organization.[40][41][42] The movement has denounced Christianity,[41] and purports to promote love for all of mankind.[43] It denounces religion for bringing horror into the world by dividing the white race.[41] Adherents of the Creativity Movement are evolutionists.[44]

Ben Klassen, the founder of the Creativity Movement, described the organizational structure of the movement as "monolithic and... authoritarian".[45][46]

The Creativity Movement was founded in 1973 by Ben Klassen. He founded it as "white racial religion" which seeks to unite whites in a common religion. He described it as an atheistic religion, in which white people are the supreme race.