Answers in Genesis is a non-profit young earth creationist organization that is dedicated to "defending the Bible from the very first verse". Its president is Ken Ham, who was a former public school science teacher, and once worked for the Institute for Creation Research before founding Answers in Genesis in the United States.

Answers in Genesis in the United States has a state-of-the-art Creation Museum which opened on May 28, 2007, admitting more than 4,000 visitors on its first day. AiG also opened the Ark Encounter, a full-sized replica of the biblical Noah's Ark, on July 7, 2016. The Answers in Genesis website won the "Ministry Website of the Year" award in 2006 from the National Religious Broadcasters out of 1,400 possible recipients, and received about 45,000 site visits per day in 2006.[1]

In addition to its numerous United States activities, AiG is active in several other countries around the world, particularly the United Kingdom.[2] 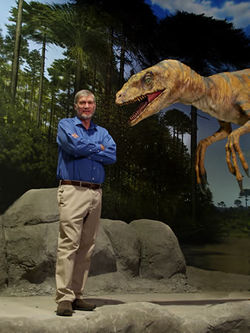 Ken Ham, the cofounder and president of AiG.

Answers in Genesis was launched in 1994, then called "Creation Science Ministries".[3] It was created with the intention of being "more layperson-oriented" than the Institute for Creation Research.[3] That same year, the organization's name was changed to "Answers in Genesis", which is the current name of the ministry.[3]

In late 2005, Answers in Genesis in the United States, with its sister organization in the United Kingdom withdrew from the group of sister AiG organizations. As they had been sharing the one web-site, run by the American ministry, this effectively forced the remaining organizations in Australia (the parent organization), New Zealand, Canada, and South Africa to rebrand, as Creation Ministries International (CMI).

Answers in Genesis in America stopped distributing Creation magazine and the peer-reviewed Journal of Creation (both published by the Australian ministries), switching subscribers to the new Answers magazine published by the American ministry. CMI claims that this was unethical, unlawful, and harmed their ministry. After failing to obtain a satisfactory resolution on the dispute, CMI began legal proceedings against AiG (U.S.) in May 2007.[4] In August 2007 the two parties met in Hawaii in an attempt to resolve the dispute, and reached verbal agreement on a settlement. However, in putting the agreement in writing, CMI claims that AiG subsequently effectively rewrote it, reneging on the verbal agreement. CMI had intimated that they will resume the legal proceedings, but the dispute is now settled, as of April 2009[5]

While Answers in Genesis has chosen to not discuss the lawsuit on their website, they do offer a perspective into the decision to create separate organizations and state that while there were philosophical differences in how the organizations were to be run, that both organizations continue to have the same belief in Creationism and the parting was due to how to best present that message. AiG also discusses the discontinuation of Creation magazine in favor of Answers.[3]

As is common in disputes where no resolution has been found, the presentations of CMI and AiG in describing what occurred have a different emphasis on events.

According to AiG, Ken Ham, AiG's president, had a vision for "a creation museum that teaches the truth" since 1979, when he began his ministry in Creation Science.[3] During the mid-1990s, after AiG was founded, the ministry began searching for land in Northern Kentucky to build the museum.[3] The Museum was opened on May 28, 2007[3] at the cost of $27 million.[6] $21 million of the cost was raised through private donations.[7]

It was estimated that 250,000 people would visit the museum in the first year.[6] However, the 250,000th visitor visited the museum in early November, nearly seven months ahead of schedule.[3][8]

In March 2011, AiG and Ham had an invitation to the two Great Homeschool Conventions revoked by the events' organizers. The organizers cited Ham's criticism of the group as the reason for the revoked invitation, but the board of AiG found no spiritual wrongdoing on Ham's part.[9]

The Legacy Hall in the Creation Museum, where the debate between Ken Ham and Bill Nye took place.

On February 4, 2014, Ken Ham, the president of AiG, debated science educator and evolutionist Bill Nye at the Creation Museum.[10] The debate was the dominant trending topic on Twitter and Facebook and it was estimated that over 3 million people watched the debate live.[11] It was reported in the mainstream media that because of the debate, interest and support for the Ark Encounter, which had been struggling for funds, returned, and AiG was able to raise enough money so construction could begin in 2014,[12] even though AiG has stated that this was not the case, as it was not reasonably possible to purchase a bond after the debate.[13]

After the completion and success of the Creation Museum, Ham and AiG started focusing on building the Ark Encounter, a life-sized replica of Noah's Ark.[3] The plans for constructing the Ark Encounter were announced by AiG, along with Kentucky Governor Steve Beshear on December 1, 2010.[3]

During the construction of the Ark Encounter, AiG sued the state of Kentucky after officials blocked AiG from receiving a sales tax tourism incentive worth up to $18 million because AiG would use the Ark Encounter to share the gospel. On January 25, 2016, Federal Judge Gregory Van Tatenhove ruled in AiG's favor, ruling that blocking the incentives from AiG was unconstitutional and violated their First Amendment protections.[14][15][16]

On July 7, 2016, the Ark Encounter was opened to the public in Williamstown, Kentucky.[17] The ark cost $100 million and is 510 feet long, 85 feet wide, and 51 feet high, based on the dimensions given in the Bible.[18] The opening date, 7/7, was intentionally chosen to coincide with Genesis 7:7. The next day, Bill Nye visited the Ark Encounter upon invitation from Ham.[19] As they walked the Ark, they had an informal debate.[20]

As a Christian organization, AiG believes that salvation is obtained through faith in Christ alone, regardless of whether one believes in Creation or Evolution.[21][22] Despite this, AiG does believe that having a literal view of Genesis is important in understanding the Gospel and in having a high view of God and the Bible, among other reasons (i.e. an authority issue, rather than a salvation issue).[22][23]

AiG does not support mandating the teaching of creationism in public schools because "it would likely be taught poorly (and possibly mockingly) by a teacher who does not understand what the Bible teaches and who believes in evolution."[24] AiG does believe that both teachers and students "should have academic freedom to critically examine scientific facts and the worldviews by which they are interpreted."[25]

AiG does not support the intelligent design movement because although it affirms a creator of the universe, it does not challenge the theory of evolution and long ages and, more importantly, it does not specify who exactly the creator was and separates general revelation and special revelation from each other.[26]

Based on its belief in the Bible, citing verses such as Leviticus 18:22, Leviticus 20:13, Romans 1:26-27, and 1 Corinthians 6:9-10, AiG believes homosexuality to be a sin.[27][28] To celebrate the Christmas season in 2016, AiG decorated the Ark with rainbow lights in order to "take the rainbow back" from the homosexual agenda and show the true and undefiled meaning of the rainbow as recorded in Genesis 9:12-16.[29][30] Like usual, the media and supporters of the homosexual agenda have circulated blatant misrepresentations and even lies concerning this action as well as the true meaning of the rainbow.[31] Ken Ham announced in February 2017 that AiG would permanently light the Ark in rainbow colors.[32]