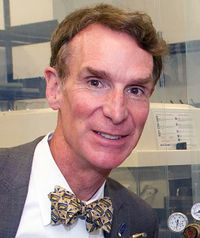 William Sanford Nye (born November 27, 1955; generally known as Bill Nye or Bill Nye the Science Guy) is an engineer, television personality, atheist activist (see also: Celebrity atheists)[1][2] known for his children's television series Bill Nye the Science Guy, a Disney show which was broadcast on PBS in the 1990s, winning several Emmy Awards. Videos of the show are often used in public schools.[3] He wears a signature bow tie during public appearances.[4] He has a degree in Mechanical Engineering from Cornell University, and has received several honorary doctorates.

He is a "science popularizer", that is, one who writes or lectures about scientific topics for the lay public. In this regard he is similar to such past and contemporary popularizers as Humphrey Davy, Michael Faraday, Arthur Eddington, Isaac Asimov, Carl Sagan, and Neil deGrasse Tyson. Some of these people were/are notable scientists in their own right; Mr. Nye is not.

In 2010, he was given the Humanist of the Year award from the American Humanist Association.[5][6] He identifies as an agnostic. Like many other non-Christians, Nye borrows from a Christian worldview on issues such as ethics.[7]

Mr. Nye's views on various matters relating to science are similar to those of most scientists—he believes in human-caused global climate change, macroevolution, and "old Earth" cosmology. Nye believes that "science is political."[8]

His mother was probably a codebreaker during the Second World War.[9]

Perhaps because of the way he has dealt with his fame, Mr. Nye sometimes exhibits bad judgment in making statements out of his known field of expertise, or says things in an overly theatrical way, that may seem silly when viewed as purely scientific statements. He has recently developed an exaggerated and flamboyant speaking style, to a degree that many traditional scientists may find distasteful. Some examples of this will be given below. Nye admitted in 2017 that his "worst intellectual habit" his jumping to conclusions, something which may explain his stances of creation and climate change.[10]

Mr. Nye accepts evolution and opposes Biblical creation. He strongly opposes the teaching of Biblical creation in public schools and rejects the "teach the controversy" stance that some people advocate, which presents both theories as equally valid and worthy of study.

In 2012 he produced a video attacking the teaching of Biblical creation to children. In the video, he said: "I say to the grownups, 'If you want to deny evolution and live in your world that's completely inconsistent with everything we've observed in the universe, that's fine. But don't make your kids do it.'"[11] In an interview on the topic he said "[t]he biblical stories were presented to me, but they never seemed reasonable."[11] This stance, needless to say, does not sit well with the Answers in Genesis (AiG) organization, a Christian apologetics ministry, which argues that by supporting censoring the teaching of biblical creation, Nye thus supported brainwashing children with evolution rather than letting them have a balanced education on the topic.[12] That organization publicly called on Nye to debate the creation-evolution issue.[13]

On February 4, 2014, Nye debated Ken Ham, the president of the Christian apologetics ministry Answers in Genesis. The debate was widely watched on the internet.[14] The debate was the dominant trending topic on Twitter and Facebook, and it was estimated that over 3 million people watched it live.[15] It was reported by the mainstream media that because of the debate, interest, and support for the Ark Encounter, which had been struggling for funds, returned, and AiG was able to raise enough money so construction could begin in 2014,[16] even though AiG has stated that this was not the case, as it was not reasonably possible to purchase a bond after the debate.[17]

Ham challenged Nye during the debate and several times afterward to "name one piece of technology that could only have been developed starting with a belief in molecules-to-man evolution," but Nye has been unable to find any example.[18]

In late 2014, Nye released a book entitled Undeniable: Evolution and the Science of Creation,[19] in which he laid out in detail his case for evolution and against creationism. While it was well received on Amazon,[20] it was panned by Answers in Genesis.[21]

On July 8, 2016, the day after the Ark Encounter opened to the public, Nye toured the attraction upon invitation from Ham.[22] At one point in the informal debate, Nye stated that it is reasonable to believe that all humans came from Martians, but at the same time that is unreasonable to believe that all humans came from Adam and Eve.[23] Nye made other inconsistent statements throughout the discussion.

Praise of innovations by creationists

Although Nye believes that belief in biblical creation somehow impedes scientific and technological progress—despite there being massive and strong evidence to the contrary—scientific and technological innovations have been made by biblical creationists, such as the MRI scanner invented by Raymond Damadian. Nye has failed to note that when praising those innovations.[18]

Bill Nye advocates action on global warming and has appeared in Climate Code segments on the Weather Channel giving advice on how to save energy.

In April 2016 he took the global warming debate up to the "put your money where your mouth is" level. He issued two bets, of $10,000 each, with Joe Bastardi, a "climate change contrarian" and frequent critic of Nye. One bet was that "2016 will be in the top 10 of hottest years on record", and the other was that "this current decade will be the warmest ever recorded".[24] Mr. Bastardi did not take up the offer. Since 2016 has ended, the first bet has ended. Nye's supporters claim he would have won, NASA and NOAA reported in 2016 that it was "the third year in a row to set a new record for global average surface temperatures."[25][26] Not everyone accepts those two reports, and some people may accept alternative sources of information.

In a video interview released in April 2016, Nye stated his willingness to imprison those who disagree with his anthropomorphic climate change views.[28] In July 2017, Nye stated that climate science would only advance when older people (aka. "climate change deniers") die out.[29]

In October 2017, Nye admitted that "It’s completely ineffective! I am a failure!" regarding his attempts to convince people that human-caused climate change is real.[30]

Tucker Carlson interviewed Nye in late-February 2017 and had a heated debate over climate change.[33]

In April 2017, Nye participated in the March for Science,[34] which critics noted was an attempt to promote their political views through "science."[35][36][37] Nye himself stated around the same time that "science is political."[8]

In April 2017, Nye stated that Western countries should "at least consider" enacting policies punishing parents for having "extra kids," even though such policies are eugenics and represent a massive reduction of personal liberty.[43]

In March 2015, Nye was widely criticized for changing his mind about genetic engineering (or GMOs) after a visit to Monsanto, the pesticide and seed giant at the forefront of the biotechnology industry.[44] After his visit, Monsanto even tweeted a picture of Nye surrounded by other scientists from the GMO company, saying, "Thanks @BillNye for visit & advancing #science understanding. Look forward to more discussion!" [45]

In mid-April 2016, former Alaska Governor Sarah Palin at a gathering at the Washington premiere of the anti-climate change film Climate Hustle, called into question Nye's credentials. "Bill Nye is as much a scientist as I am. He's a kids' show actor. He's not a scientist."[46]

To help prove whether Nye is a real scientist, FactCheck.org cited his qualifications, that proved to be just honorary degrees: Nye has a B.S. in mechanical engineering from Cornell. He also has six honorary doctorate degrees, including Ph.D.s in science from Goucher College and Rensselaer Polytechnic Institute.[47]

In late April 2016, Weather Channel founder John Coleman (a meteorologist for over six decades), accused Bill Nye of being "a pretend scientist in a bow tie." He went on to add that "In 20 or 30 years, when Nye is an old man, he will realize how wrong he was as the Earth continue to be a just a great place to live."[48]

Nye was strongly criticized in April 2017 when he released his Netflix TV show Bill Nye Saves The World, which was full of vulgarity, sarcasm, and segregation of people who disagreed with Nye's own interpretations.[49] In it, he promoted his political and social views of gender identity and environmentalism, appearing to place those views over actual science.[50] He used perverted illustrations and popular songs to prove his arguments regarding gender, rather than actual science.[51] In contrast to his stated views in his 2017 Netflix show, Nye stated in his 1996 Bill Nye the Science Guy show that chromosomes determine gender and that male and female were the only possible genders.[52] Some of Nye's colleagues on his show made extreme comments. Marcella Arguello, a writer for the show, wrote on Twitter that the deaths of "a few old a** conservative white men" would be worth it if it lead to gun control.[53] During a segment on one episode, actress Rachel Bloom performed a "song" called Sex Junk. It was very poorly received.