Stephen Fry is an atheist.[1]

The actor Brad Pitt confessed he was never an atheist and just pretended to be one out of rebellion (see also: Causes of atheism).[3]

Wikipedia, an online encyclopedia founded by an atheist and agnostic, has an entire article entitled List of atheists in film, radio, television and theater[4] 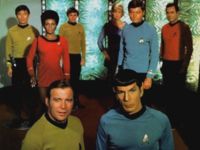 Gene Roddenberry was the creator of the Star Trek franchise

The crew of the Enterprise from the original 1960s show.

See also: Atheism and mass murder and Irreligion/religion and war and Atheism and violence

The article Why the arguments of the ‘New Atheists’ are often just as violent as religion states:

Overlap between celebrity atheists and Hollywood A study found that atheists were more likely to be seen as narcissistic than religious believers - especially male atheists.[40] See also: Atheism and arrogance and Atheism and narcissism

One of the reasons why there is overlap between celebrities and atheists is their similar respective value systems (see: Hollywood values and Atheism and morality).

In addition, many famous actors/actresses have inflated egos as do many atheists (see: Atheism and arrogance and Atheism and narcissism).

For example, an article in The Daily Illini (a newspaper at the University of Illinois) indicated: "It’s awards season yet again, and I for one feel overwhelmed with the amount of awards shows that seem to exist purely for stoking the already inflated egos of Hollywood."[41]

See also: Atheists inflating the number of atheists and Definition of atheism and Atheism and deception

Many celebrity/famous atheists lists have a tendency to inflate their list by claiming agnostics to be atheists or even claiming theists as being atheists (see: Atheists inflating the number of atheists and Atheism and deception).

Part of the problem is the some atheists/agnostics give vague responses in relation to the existence of God when asked which is partly due to much of the public having unfavorable views towards atheists (see: Views on atheists and Distrust of atheists and Closet atheist). Also, there are various definitions of atheism.

Numerous studies report that athletes to be more religious than non-athletes.[42]

On the other hand, Christianity/theism has an abundance of well-known sports athletes associated with it.[43][44] And Christian athletes commonly ascribe their success to God's blessing and thank God for their victories.[45]

Atheism and its reliance on celebrity atheists The Cathedral of Our Lady of Strasbourg was turned into a Temple of Reason by the Cult of Reason. See: Atheist cults

Secular leftism has a history of being violent and murderous (see: Atheism and mass murder). See also: Atheism and violence and Left-wing violence in the Trump era and Donald Trump and American atheists and Intolerance of militant atheism and militant Islam

As far as atheism and anarchism, according to the website The Atheist Scholar: In 2011, Coyne said about the atheist conferences which he attended that they had an air of self-congratulation.[51] He also indicated about atheist meetings: "But to me the speakers and talks have often seemed repetitive: the same crew of jet-set skeptics giving the same talks."[51]

The atheist Jerry Coyne said about the atheist conferences which he attended:

The atheist website Atheist Revolution declared about segments of the atheist population:

In 2018, the atheist PZ Myers wrote: "I noticed the “troubling turn” about 8 years ago, as more and more atheists began to rally around two themes: the Glorious Leaders who were fonts of inarguable Reason & Logic, and a definition of atheism that exempted them from all social responsibility or ethical obligation."[53][54]

The Media Research Center released a study in 2008 reporting pro-atheism bias by major press outlets in the United States (see: Atheism and the media).[55]

Unlike atheism, Christianity (which has a large body of evidence to support it) has never heavily focused on using Hollywood celebrities and the mainstream media to recruit adherents.

Hollywood has hostility towards biblical Christianity and Christians

Today, much of Hollywood has hostility towards biblical Christianity and its adherents (see: Hollywood values).[56][57]