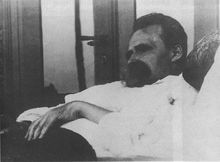 The atheist Friedrich Nietzsche wrote: "But now God is dead. You superior men, this God was your greatest danger. Only since he is in the grave, have you risen again. Only now comes the great noontide; only now the superior man will be – Lord!".[1]

The atheist activist Lee Moore said about the future of the atheist movement and its significant issues with in-fighting, "We're all kind of like self-centered and egocentrical atheists."[3] See also: Atheist factions and Atheism and social skills

One of the common and well-founded charges against atheists is their arrogance and presumptuousness.[4]

Why atheism is an arrogant ideology

The popular Christian YouTube video maker Shockofgod created an uproar when he asked the atheist community the question, "What proof and evidence do you have that atheism is accurate and correct?"[10] Using special text analysis software, the social psychologist Jonathan Haidt found that New Atheists very often wrote in dogmatic terms in their major works using words such as “always,” “never,” “certainly,” “every,” and “undeniable.”[11] Of the 75,000 words in Sam Harris's The End of Faith, 2.24% of them connote or are associated with certainty.[12]

Errors in the works of New Atheists

Social science research indicates that anti-theists score the highest among atheists when it comes to personality traits such as narcissism, dogmatism, and anger.[15][16] Furthermore, they scored lowest when it comes to agreeableness and positive relations with others.[17]

See also: Richard Dawkins' cult of personality and Atheism is a religion

In a 2014 New Republic article entitled The Closed Mind of Richard Dawkins: His atheism is its own kind of narrow religion, the atheist philosopher John Gray wrote:

Theo Hobson on the angry dogmatism of Richard Dawkins In a April 2013 article in The Spectator entitled Richard Dawkins has lost: meet the new new atheists, Theo Hobson declared:

Professor Phil Zuckerman on the smugness of Richard Dawkins

Atheist author and sociology professor Phil Zuckerman said of Richard Dawkins: "He is smug, condescending and emits an unpleasant disdainfulness. He doesn’t ever seem to acknowledge the good aspects of religion, only the bad. In that sense, I think he doesn’t help atheism in the PR department."[22]

The atheist Phil Plait said about the skeptical movement: "Hubris is running rampant. And egos are out of check. And sometimes logic is put by the wayside."[23]

Atheism and the appeal to ridicule fallacy

The appeal to ridicule fallacy, also known as the appeal to mockery and the horse laugh, is a fallacy of relevance. It consists of mocking an opposing argument rather than considering it on the merits.

Historically, atheists have significantly used mockery rather than reason, to gain adherents (see: Atheism and mockery).[24][25][26]

Historically militant atheists have commonly endeavored to limit the religious freedom of others while imposing their errant, atheistic ideology on others. The ABC News.com commentator John Allen Paulos remarked of the “brights” campaign, “I don’t think a degree in public relations is needed to expect that many people will construe the term as smug, ridiculous, and arrogant.”[27] According to a 2003 Skeptical Enquirer article by Christ Mooney, "From the start, the “brights” label label reinforced a longstanding stereotype. Atheists already have a terrible rap for being coldhearted rationalists who attend Mensa gatherings and dismiss religious believers as simple-minded fools."[28]

The Brights Movement largely came about because the label "atheist" has such a bad reputation. The atheist Sam Harris has said concerning the label of atheist, "It's right next to child molester as a designation." (See also: Views on atheists and Atheism and social outcasts).[29] [30]

In October of 2003 in a article in the Guardian, Richard Dawkins associated being a "bright" with being an intellectual.[31]

According to a 2004 Psychology Today article the Brights’ Web site launched in 2003 and signed on tens of thousands of Brights from more than 84 countries.[34]

Michael Shermer distances himself from Brights movement after endorsing it

Contrary to what the Brights Movement website claims, Michael Shermer is no longer an "enthusiastic Bright", as he stated in 2003: "However, when it became apparent to me that the vast majority of people most likely to fall under the "bright" rubric would not use the label, I became, well, skeptical that it would succeed. For the time being I continue calling myself a skeptic."[35] Shermer also wrote regarding the Brights movement: "The reaction was swift and merciless—almost no one, including and especially nonbelievers, agnostics, atheists, humanists, and free thinkers, liked the name, insisting that its elitist implications, along with the natural antonym “dim,” would doom us as a movement."[36]

The atheist Hemant Mehta is an author, popular atheist blogger and atheist activist. He also served as a chair on the Secular Student Alliance board of directors. His blog is called The Friendly Atheist. Given the Brights Movement's reputation for smugness, his endorsement of the Brights Movement and his current listing as an "Enthusiastic Bright" on the Brights Movement website, could be seen as a matter of hypocrisy due to the attributes of "friendly" and "smug" being incompatible opposites.(see: Atheist hypocrisy).[37]

Unlike the skeptic Michael Shermer who had second thoughts after endorsing the Brights Movement, Hemant Mehta has never publicly denounced the Bright Movement for its smugness and remains listed on on its website as an "Enthusiastic Bright".[38]

After the Brights Movement failed to attract a subsequent significant following subsequent to their initial launch period and then petered out as a movement, the popular YouTube video maker Shockofgod mocked the movement and the movement's weak website traffic with a video entitled Atheism's future not bright at all.[41] See also: Decline of global atheism and Desecularization

Reddit atheism, also known as r/atheism, is one of the largest internet groups of atheists.[42] John W. Loftus, one of the more prominent atheists in the atheist community, cites John Draper (a Canadian atheist blogger), saying about prominent atheist PZ Myers: "According to PZ you either agree with him or you are the scum of the earth. If anyone is giving atheists a bad reputation it's PZ - he shows no tolerance or respect for anyone other than himself."[45]

PZ Myers wrote: "But see, this is why the atheist movement can’t have leaders. The ones we’ve got, informally, all seem to think they’re like gods and popes, infallible and unquestionable, and that normal, healthy, productive criticism within the movement is all a conspiracy to dethrone them."[46]

Prosperity leading to arrogance and atheism

Although the United States with its tradition of religious freedom and a strong work ethic has experienced high levels of prosperity and religiosity, often prosperity is inversely proportional to religious belief due to men's arrogance when they become wealthier. [47][48] Vox Day has pointed out that arrogant and godless nations have often eventually experienced significant hardships (See also: Atheism and lower economic productivity).[49]

The Encyclopedia Britanica (Edinborough 1771) in its article on atheism declared: "Many people both ancient and modern have pretended to atheism or have been reckoned atheists by the world, but it is justly questioned whether any man seriously adopted such a principle. These pretentions therefore must be founded on pride or affection."[50]

“Before God! But now God is dead. You superior men, this God was your greatest danger. Only since he is in the grave, have you risen again. Only now comes the great noontide; only now the superior man will be – Lord!" - Friedrich Nietzsche [51]

"Suffering and taking sin upon himself might have been right for that preacher of small people [Jesus Christ]. But I rejoice in great sin as my great solace." - Friedrich Nietzsche [52]

Pride of David Silverman about his substandard book

Despite the many shortcomings of his book Fighting God, David Silverman, the ex-president of the American Atheists, said of his book : "...I am very proud of it as you can tell."[53]

See also: David Silverman intentionally exaggerating the number of atheists in the USA

The atheist cult of LaVeyan Satanism asserts that pride is not a vice, but is in fact a virtue. Also, the egotistical New Atheist Richard Dawkins has a cult-like following which he actively cultivates (see: Richard Dawkins' cult of personality and Abrasiveness of Richard Dawkins).

The Secular Coalition of America has instituted an "Atheist Pride Day".[56]

PZ Myers' arrogance at his blog PZ Myers is a liberal, atheist and evolutionist activist in the creation-evolution controversy, contributing to The Panda's Thumb and Pharyngula blogs. Myers is also an associate professor of biology at the University of Minnesota Morris (UMM)[57]

Freethought Blogs is a spinoff of ScienceBlogs launched by PZ Myers and Ed Brayton. The Pharyngula blog resides on the Freethoughts Blogs domain.

PZ Myers turns off the social aspect of his blog

The atheist Michael Nugent reported in 2015:

Both atheists and Muslims have developed a reputation of being thin-skinned (and for wanting to impose their ideology on others). It has been quipped that "Atheism is the easiest religion to troll".[61][62] Internet trolls often actively pursue trolling atheists due to their penchant of being so proud and so easily angered.[63]

In 2012, The Guardian published an article entitled Limmy's Show: Confessions of an internet troll which had the subtitle There's a witch-hunt going on against internet trolls right now. But, argues Scots funnyman Limmy, randomly goading atheists, jocks and non-existent techno geeks can be fun.[64] And of course, being thin-skinned is symptomatic of having excessive pride.

At the same time, atheists are known for trolling others and for engaging in internet atheist bullying.[66][67]

On August 14th, 2013, the atheist Brendan O'Neill wrote an article in The Telegraph entitled How atheists became the most colossally smug and annoying people on the planet in which he wrote: "These days, barely a week passes without the emergence of yet more evidence that atheists are the most irritating people on Earth.".[68] For more information please see: Atheism and social intelligence and Atheism and emotional intelligence and Atheism and immaturity

Satan is most well known for his pride and rebellion. Notable figures have suggested that atheism is the result of Satanic deception.

See also: Atheism and drug addiction and Atheism and alcoholism and Abrasiveness of Richard Dawkins and Liberal elite

Paul wrote concerning drunkards and becoming free of enslavement to a drunken lifestyle: