Michael Nugent (born June 1, 1961) is an Irish writer and atheist/political activist. Nugent has written three books and has co-written two books. In addition, he was one of the three writers of the comedic musical play I, Keano.

Nugent is chairperson of the atheist organization Atheist Ireland.[1]

He has also been an advocate of various political views, frequently with his late wife Anne Holliday. 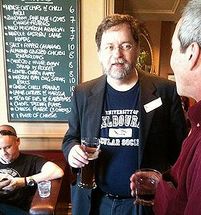 In April 2015, Atheist Ireland announced, "Atheist Ireland is publicly dissociating itself from the hurtful and dehumanising, hateful and violent, unjust and defamatory rhetoric of the atheist blogger PZ Myers."[3] The atheist biologist Massimo Pigliucci said of Myers, "one cannot conclude this parade without mentioning P.Z. Myers, who has risen to fame because of a blog where the level of nastiness (both by the host and by his readers) is rarely matched anywhere else on the Internet...".[4]

Due to its notability requirements, the website Wikipedia® (which was founded by an atheist and agnostic), does not make mention of any specific accomplishments PZ Myers may have achieved in the area of social justice. Wikipedia does mention the social justice accomplishments of Christians such as William Wilberforce, Harriet Beecher Stowe and others.

According to the Irish atheist Michael Nugent: "The atheist movement is global. It is not defined by the mostly American ‘deep rifts’ disagreements."[5]

Furthermore, Irish atheists have a reputation for being ill-tempered/quarrelsome just like their American counterparts.[9] According to the Irish Independent, "If there's one thing you can take for granted, it's that atheists tend to be a rather cranky bunch."[10] See also: Atheism and social/interpersonal intelligence and Atheist factions

As far as global atheism:

1. Global atheism is declining as a percentage of the world's population and this trend is expected to continue according to religious demographic scholars (see: Desecularization).

There is no comprehensive and agreed upon plan among atheists on how to reverse the global decline of atheism in terms of global market share which has been occurring since at the least the time of the dissolution of the Soviet Union on December 26, 1991.[12]

2. Most atheists are East Asians (See: Asian atheism). And East Asian atheism is significantly influenced by communist China which practices an authoritarian militant atheism which engages in human rights violations (see: Communism and religious persecution and Atheism and communism).

3. Although PZ Myers' Freethought Blogs is facing a significant loss of web traffic, according to Alexa, it still has more global influence than the Atheist Ireland website and Michael Nugent's website.

According to Alexa, as of June 9, Freethoughblogs is the 51,919th most popular website in the world and is currently declining in its Alexa ranking.[17]