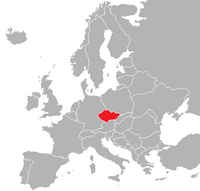 According to an international study done by William Bainbridge, atheism is frequent among people whose interpersonal social obligations are weak and is also linked to lower fertility rates in advanced industrial nations (See also: Atheism and social skills).[3] See also: Atheism, women and children

Replacement fertility is the level of fertility that is required to sustain a population without any external inputs (see also: Population crash).

In human populations, replacement fertility is 2.1 children born per woman in a given population.

Eric Kaufmann teaches at Birbeck College, University of London and he specializes in how demographic changes affect the realms of religion/irreligion and politics. Kaufmann wrote about the problem of sub-fertility in the developed world in his book Whither the Child?: Causes and Consequences of Low Fertility.[5] Kaufmann is an agnostic.

On December 23, 2012, Kaufmann wrote about the subject of global desecularization:

A study conducted by the Washington-based Pew Forum on Religion & Public Life says that Africans are among the most religious people on Earth.[7] Africa has a high fertility rate and it is seeing a big population boom. According to the Institute For Security Studies: "Africa's population is the fastest growing in the world. It is expected to increase by roughly 50% over the next 18 years, growing from 1.2 billion people today to over 1.8 billion in 2035. In fact, Africa will account for nearly half of global population growth over the next two decades."[8] See also: Religion and Africa and Global desecularization

Kaufman wrote in his academic paper Shall the Religious Inherit the Earth?: Demography and Politics in the Twenty-First Century

Michael Blume, a researcher at the University of Jena in Germany, wrote about the sub-replacement level of fertility among atheistic populations: "Most societies or communities that have espoused atheistic beliefs have not survived more than a century."[11] Blume also indicated concerning concerning his research on this matter: "What I found was the complete lack of a single case of a secular population, community or movement that would just manage to retain replacement level."[11] See also: Atheism and sexuality

The abstract for the 2017 journal article The Future of Secularism: a Biologically Informed Theory Supplemented with Cross-Cultural Evidence indicates:

The researchers indicated: "Instead, over the long term, we predict that the most religious 'shall inherit the earth,' so to speak".[13]

Reporting on the study, the Daily Mail indicated:

The authors of the study “envision a decline in secularism throughout the remainder of the twenty-first century, especially in industrialized countries.”[14]

Pew Research: Fertility rates for atheist and the religious

Pew Research reported in 2015 that the average Christian woman in the world has 2.7 children.[15]

In 2015, the Washington Post wrote about the United States and fertility rates for various religious groups: A replacement level of births in a country is 2.1 children per woman.

As atheist populations rise in age, the fertility rates of atheistic countries could drop further. The Rand Corporation indicates, "Nearly all European nations are experiencing long-term downtrends in fertility, and consequently, ageing of their populations. These demographic trends could have potentially damaging consequences for European economies."[18]

See also: Atheism and women and China and atheism With its large population, China has the largest population of atheists with 8 - 14% of Chinese being atheists.[19] Christianity is rapidly growing in China which will increase global desecularization and boost China's fertility rate. See: Growth of Christianity in China

China has the world's largest atheist population (see:China and atheism).[20][21] The current atheist population resides mostly in East Asia (particularly China) and in secular Europe/Australia primarily among whites.[22] See: Asian atheism and Western atheism and race According to a 2012 Worldwide Independent Network/Gallup International Association (WIN/GIA) poll, 47% of Chinese people were convinced atheists, and a further 30% were not religious. In comparison, only 14% considered themselves to be religious.[23]

According to 2012 figures from the National Bureau of Statistics of the People's Republic of China, China’s sex ratio at birth (the number of boys born for every 100 girls) was as high as 118, while the sex ratio amongst the total population was about 105.[24] The statistical data from China indicates that the gap between male and female at birth is far larger than the biologically benchmark ratio (a sex ratio at birth of around 105 males per 100 females).[25]

Center for the Study of Global Christianity: Atheists and religious population projections

According to Gordon-Conwell Theological Seminary's Center for the Study of Global Christianity, which has made projections up to the year of 2050, the percentage of the global population that are evangelical Christians/Pentecostals is expected to increase while the atheist population is expected to decline (see: Research on the projected number of atheists in the world).

Film documentary Demographic Winter: The decline of the human family

The film Demographic Winter: The decline of the human family focuses on the issue of sub-replacement fertility.

A review of the film documentary Demographic Winter declares: